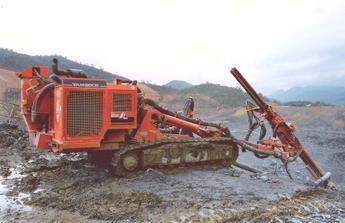 One of Vietnam’s largest hydroelectric projects, the Na Hang dam, is currently under construction some 600km north of Hanoi. When completed in 2008, the hydro plant will be capable of producing 342MW for the country’s rapidly expanding economic requirements and will be just one of forty such schemes planned for the next twenty-year period.

Straddling the mid-level reaches of the Gam river, the Na hang dam site excavation works started in late 2002. Main Contractor Song Da Construction Corporation, responsible for seven of the previous nine hydroelectric power stations in the country – including the then largest, are once again breaking records with their latest commission.

The Na hang dam site covers a catchment area of 1482.2km2 and will retain a 1.5Bm3 capacity lake covering almost 80km2. Rising to 124.5m above the riverbed the dam will power three turbines designed to produce 342MW at peak capacity.

The Pantera 1100 is a hydraulic, self-propelled, self-contained crawler-based surface drilling rig equipped with a cabin and a rod changer. It is able to drill 89-140mm vertical, inclined or horizontal holes with 51mm and 60mm extension rods.

The power pack is mounted crosswise at the rear of the rig to balance the weight of the boom.

The main contractor’s quarry site for the project is located downstream from the ongoing waterway tunnels and a number of Tamrock’s Pantera 1100 rigs are expanding the site into the surrounding jungle. Using Sandvik 60 Normal cemented carbide drill bits and 3.7m long Sandvik 60 drill rods, the contractor is developing a 12m high x 20m wide, six-bench excavation. Up to 50 holes are drilled per round yielding approximately 1200 tonnes per hole.

At the main dam site operations, a Tamrock CHA 550 rig is being used to develop the spillway. The self-propelled top hammer rig with its high ground clearance and low centre of gravity has been developed to safely access the steep and unstable ground conditions encountered. Once again, Sandvik’s rock drilling tools are in evidence, utilising T38 drill strings and 76mm diameter normal drill bits. Drilling depth at the spillway is to 4m at <10º vertical with approximately 60 holes being drilled per blast cycle.

The Sandvik Tamrock drill rigs being operated by Song Da have been introduced over the past two year period. Local Vietnamese distributor Openasia has been pro-active in providing a comprehensive after sales service for the product and contributes on-going training programmes for Song Da’s plant operators.

At this stage, Song Da Corp is building up the rock core of the dam which is scheduled to be finished by December 2005. Concreting the surface of the dam is expected to start in January 2006. By the end of 2006, the first of three generators will start to produce power, with the whole plant commissioned in mid 2007.