Centrax has signed an agreement with Rolls-Royce to become the exclusive packager of its Trent 60 generating set in Europe, a move which both companies see as providing an enhanced route to market for the gas turbine in this continental region 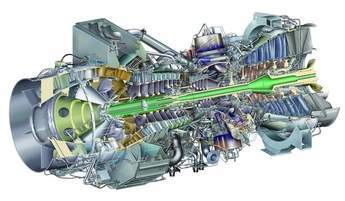 Under the agreement, Centrax will assemble Trent 60 generating sets from components supplied by Rolls-Royce. The Trent 60 is Rolls-Royce’s aeroderivative industrial gas turbine based on the well known RB211 aero engine. As an EPC contractor Centrax will tender for total power station plant utilising the Trent, and as a full packager, will have the full responsibility for selling and building Trent packages.

In order to accommodate the increase in manufacturing demand at their Newton Abbot site, Centrax will be constructing a new 2500 m2 assembly plant adjacent to the existing 501 gas turbine packaging shop and taking on new personnel. Commenting on the new agreement, Guy West, a director of Centrax, said, ‘We have had a long and successful relationship with Rolls-Royce and have been involved with their 501 gas turbine for nearly thirty years. It has proven to be an excellent engine in the 2.5 to 6 MW class and we have been the leading 501 packager.’

Centrax has already made its first move, placing a tender document with Gaz de France for a 200 MW power station to be powered by four Trent 60 units, and is on the verge of signing the largest ever contract in its sixty year history with the announcement that they have been nominated as the preferred supplier.

The plant in question is the r100 million gas fired power station to be located at St Brieuc in Brittany, France. The French publicly owned company Reseau Transport Electrique (RTE) selected from a list of bids that proposed by Gaz de France in December last year. In May this year, in order to develop the proposal described in its bid, Gaz de France chose the Centrax solution powered by four Rolls-Royce Trent 60 gas turbines. GdF ‘s aim is to supply electrical power from the new station to the Brittany region from 2010.

Centrax will head a consortium that includes the French engineering contractor Litwin, part of the Bateman-Litwin Group. The consortium will be responsible for all aspects of the power station construction, including full engineering, procurement and construction.

Centrax will also be responsible for the total packaging of the generating sets. A single Trent 60 WLE dual fuel machine will power each set.

The construction of the new St Brieuc power station is as a result of growing electrical demand in the region, bringing the French electrical grid supplying Brittany close to hitting its critical transit capacity.

The plant power output will therefore provide stability to the Brittany power grid as well as increasing GdF’s sourcing capacity. The new station is to be sited in a semi-rural, green-field location on the outskirts of an existing industrial estate 10 km south of St-Brieuc.

Once constructed, the new plant will offer very fast start up capability being able to reach its full power of 200 MW within thirteen minutes of plant start up. During its operating cycle, which is scheduled for November 1st to March 31st, plus 30 days during the rest of the year, the plant’s availability should be higher than 95 %. In fact Gaz de France selected the aero derivative gas turbine option put forward by Centrax on the basis of its ability to achieve quick, frequent and reliable starts and its established success in mid-merit operation.

The four sets will be installed as indoor packages, two sets each in two turbine halls, and will have an improved acoustic specification to achieve 60dB(A) at the site boundary and 42.5dB(A) at the nearest dwelling. As the supplier of the balance of plant for the St Brieuc power station Litwin will be responsible for all civil works including ground clearance, fencing, roadways, parking and site landscaping. Their main scope of supply will be the construction of the two turbine halls, workshop, water treatment plant for the Trent’s water supply, compressor room and the HV, MV and LV switchgear rooms.

Gaz de France see winning this contract, the first competitive tender for generation capacity to be awarded by RTE, as a success for GdF: and for Centrax and Litwin too, as it demonstrates the faith that Gaz de France has in their capabilities. Centrax believe that there will be a number of similar projects in Europe in the near future.

Genset package based on the Trent 60

Rolls-Royce is to supply Alinta Ltd with a Trent 60 WLE (wet low emissions) dual-fuel generating set for its new Tamar Valley power station on the Tamar River in Tasmania. The package will operate in a simple-cycle mode supplying 58 MW of electrical power as part of a new 180 MW gas turbine installation that will provide back-up and peaking capacity to the National Electricity Market.

Chilean power generator Hidroeléctrica La Higuera SA has ordered a Trent 60 wet low emissions dual fuel package, capable of providing up to 58 MWe at ISO conditions, for its new power plant at Colmito. It is the first Trent 60 gas turbine to be ordered for service in South America.

The Colmito plant, which is near Valparaiso, is to provide a secure power back-up to the La Higuera hydro power plant during droughts, or periods of low flow in the river. Hidroeléctrica La Higuera SA is a 50:50 joint venture formed by Pacific Hydro Ltd and Statkraft Norfund Power Invest AS, to build, own and operate the La Higuera plant, a 155 MW run-of-the-river hydro power facility located in the Tinguiririca Valley east of the city of San Fernando.