CCS and gas firing – a new balancing act for Norway

Under pressure from the environmental lobby the Norwegian government has imposed a carbon capture stipulation on a proposed Statoil CHP plant, a move that has serious implications both for gas fired generation in Norway and for the structure of its CCS programme. 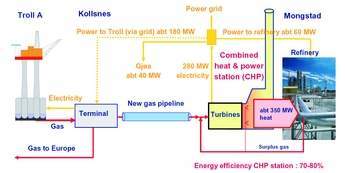 Blessed by nature with large oil and gas reserves and a hydro resource large enough to supply 98% or more of its electricity needs, and by artifice with a CO2 storage structure and a vehicle carbon tax, Norway is justifiably proud of its status as the most successfully carbon-shunning economy on the planet.

Now one of its most influential industrial concerns, the state owned oil company Statoil, wants to install enhanced oil recovery systems based on CCS technology at two of its plants – a methanol treatment plant at Tjeldbergodden and a refinery at Mongstad. With a history of ten years of CCS at its Sleipner field, and plenty of space in now empty undersea caverns, Statoil is well placed to bring these enterprises to fruition, but it wants to power them with large on-site generating plants (one of them, Mongstad, a CHP unit) that will also supply electricity to the grid. And here is where the economic and political forces meet head-on. It wants to fuel these plants with natural gas, which will of course mean emitting millions of tons of CO2.

And no fuel is clean enough for the carbon-hating Norwegians, not even natural gas. The no-emissions, no-carbon lobby is organised and powerful, a political force potent enough to have brought down one government and threatened others, and Norway will not tolerate even a small dent in its shining carbon-proof shield. And in an exquisite irony this same force threatened to damage the prospects of developing effective CCS systems in the country, and, because these would have been the two largest CCS projects in the world, the progress of the European carbon capture effort too.

The problem, more prosaically, was mainly one of funding. Although the Norwegian government at first said that a commitment by Statoil to work towards CO2 recovery at the Mongstad CHP plant would be sufficient to gain it a licence, it later changed its mind and insisted, on the recommendation of its pollution control agency SFT, that the plant must be equipped from the start with carbon capture capability. Gas power plants without CO2 management are not, SFT declared, sustainable from a long-term perspective. In fact it went further, putting out a statement to the effect that it doubted that a CO2 capture system would ever be installed if the plant project were allowed to proceed initially without such equipment.

As Statoil had already declared that such a scheme with CCS would be economically disastrous, the government was more or less compelled to support the CCS technology it had insisted on from public funds, and to that end stated that it would meet almost the full cost, estimated at 1.3 billion NOK. The immediate plan was to build a 40 MW, 80 000 tonne/y capacity pilot plant based on Alstom’s chilled ammonia process, to form, ultimately, the heart of an EU CCS research facility based at Mongstad. Subsequently the ministry has created partnerships with four large industrial players enabling it to spread the cost (see details later) and to preserve the original plan of creating a pilot plant scheduled to come on line in 2010 (as distinct from the original 2008 date) with the CHP station as the forerunner to a full scale plant due to start up in 2014.

The ministry of Petroleum and Energy has since charged its agency Gassnova, the Centre for Sustainable Gas Technologies, with the task of bringing the entire Norwegian CCS effort under one management. It will organise industrial partnerships, and provide funding.

Halten grinds to a halt

Almost simultaneously, the Halten–Tjeldbergodden feasibility study, announced with much fanfare in the spring of 2006 by partners Shell and Statoil, is reporting (see panel, p19) that its final conclusions due in the autumn will say that CCS at the complex is economically unfeasible, mainly because the remaining resources in the Draugen oilfield will not be enough to support it. It is likely therefore that the project will founder, unless money can be found to finance what would in effect be an R & D enterprise rather than an industrial one. The whole situation is a familiar one to those who have been following BP’s Peterhead saga and was presaged by Shell/Statoil in its statement of March 2006, to the effect that the whole enterprise would be impossible without substantial public funding.

Under the plan as publically announced in early 2006, CO2 would be captured from an 860 MW gas-fired power plant to be built at Statoil’s Tjeldbergodden methanol complex. CO2 emissions from the plant – 2-2.5 million tonnes of CO2 a year – would be piped to Shell’s Draugen oil field and to Statoil’s Heidrun oil field, both off the coast of Norway, and then injected into subsea reservoirs to enhance oil recovery, resulting in increased energy production with lower CO2 impact. The operators currently use water for this purpose.

Shell, which began working with CO2 for EOR in the 1970s, and Statoil, a pioneer in CO2 storage through Sleipner in the North Sea, Snøhvit in the Barents Sea and In Salah in Algeria, agreed to work towards developing the world’s largest project to date using carbon dioxide (CO2) for enhanced oil recovery (EOR) offshore.

The Tjeldbergodden power and methanol production facility would be fuelled by gas from offshore fields. Power from the plant would serve mid-Norway, and also be provided to the offshore fields, enabling near zero CO2 and NOx emissions from these installations. The various elements of the project were to be phased in during the period 2010-2012. Establishing this CO2 value chain was, according to the partners, technologically and commercially challenging, so it would depend on a substantial government funding and involvement, as well as the involvement of industrial stakeholders and electricity users in the region. (See panel, right).

Statoilâ€™s Mongstad refinery, to be the site in due course of the EUâ€™s CCS development centre

The Mongstad plan as originally conceived involved an investment of NOK 3 billion (US$450 million). It was due for completion in 2008, the power station being sized on the basis of the refinery’s heat requirements, which total about 350 MW. Its electrical output would be about 280 MW.

That plan then became somewhat extended with the imposition of the carbon capture requirement, which would establish the world’s largest full-scale CCS project at the projected CHP plant, to be fully operational by the end of 2014. The first stage of the project would be in place at the start-up of the proposed cogeneration facility in 2010.

Following pressure from energy industry officials for state help in cutting financial and legal barriers blocking CO2 storage – seen as the world’s best shot at curbing GH gases – Norway’s government said in October last year that it would finance the bulk of the CCS component of the Mongstad project. “We are developing ground-breaking technology,” prime minister Jens Stoltenberg told a news conference. In a statement, Statoil said the government “accepts the principal responsibility” for meeting the cost of capturing, transporting and storing CO2.

The plan called for the creation of a new technology company, in which the state would initially own an 80 % stake. The technology advances made by the company would pave the way for even bigger CO2 capture projects, which have so far been held up by high costs and unclear or undeveloped regulation, and was seen as primarily a technology development project which could lead to lower costs, allowing private companies to carry out similar projects without public support. The government was at that time facing a bill of over 4 billion crowns (US$594 million) to build the facility, which aimed to capture 100 000 tonnes of CO2 in 2010 and meet the plant’s full output of 1.3 million tonnes by 2014.

As envisaged in the agreement between the state and Statoil of October 2006 the ministry invited new partners to participate in the test centre, intending to enter into agreements with those already using CO2 capture technologies. The project could also establish connections with suppliers of new technology that could be further developed, tested and qualified at Mongstad, but at first development would be centred on Alstom’s chilled ammonia process, with amine absorption technology being developed in parallel.

In June this year the plan was given concrete form when the ministry of Petroleum and Energy signed an agreement with DONG Energy, Hydro, Shell, Statoil and Vattenfall on co-operating towards creation of a test centre for CO2 capture and storage at Mongstad. The agreement covers also the regulation of planning and preparation for an EU test centre (‘European CO2 Test Centre Mongstad’), and will run until the investment decision for the test centre is taken in the first quarter of 2008. The six partners will share the investment cost equally.

There are now to be two distinct undertakings. The first will be the 40 MW pilot project, examining at least two different lines of development, initially in the ratio 80 000 to 20 000 tonne/y capacity, These figures may be be modified as development progresses.

The second will be to build a full scale CCS system, at an as yet unknown cost, to be preceded by the production of a master plan, written by Statoil and covering all technical, engineering, administrative and financial aspects of the undertaking.

The pilot’s total project costs are now estimated as being in the region of 1.5 bn NOK, or around $200 million. After the final investment decision is made early next year a new technology company will be formally set up to manage the project on behalf of the partners. The present agreement will last until 2009, at which time a more detailed new agreement will be formulated.

StatoilÃ¢â‚¬â„¢s Tjeldbergodden methanol treatment plant. Plans for CCS at the site may now be postponed indefinitely

Meantime, Gassnova will be co-ordinating the work and the funding. The former government agency has this summer been devolved into a separate company charged with the task of developing government holdings in various projects, including Mongstad. Legally, the new company already exists but the organisation and administration of the spin-off is still a work in progress.

“With this project we are writing industrial and environmental history”, says Norway’s prime minister Jens Stoltenberg. “We are going to build the world’s largest carbon capture facility … at the same time we will secure and increase the power production for the Norwegian market. We are developing a ground-breaking new technology which can become an export item and a guarantee for a future sector in Norway.”

“The cogeneration plant at Mongstad is a project that is vital to our energy policy”, minister of Petroleum and Energy Odd Roger Enoksen says. “It will improve the power situation in the Bergen area. The power may also supply Troll and other North Sea fields with electricity.

“The government’s vision is to contribute to developing technology which will reduce the costs of and lead to a widespread use of CCS technology. The Mongstad co-operation is an important part of this work. I am very pleased with the fact that several of the European companies most knowledgeable on CCS will join forces, to obtain the best technological solution at Mongstad.”