Bigger wind turbine blades mean an increased area swept by rotors. These larger and longer blades capture more energy from the wind to generate electricity. Building low-weight, high-performance blades while keeping the rest of the turbine’s components lightweight is a challenge that the industry is solving with carbon. World Wind Technology speaks to Christian Vogl, project manager for rotor blades at Nordex, about the versatility of this strong and long-lasting material. 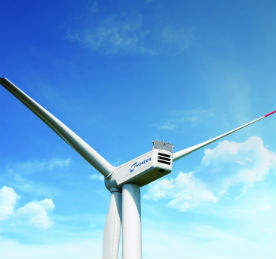 Carbon fibre’s high-tensile strength of about 240GPa is considerably more impressive than even the strongest glass fibres. This makes carbon-fibre-reinforced plastic (CFRP), which is stronger and stiffer, better able to cope with heavier loads while being lighter than glass-reinforced-fibre plastic (GRFP).

Light, carbon-based blades also mean lighter and cheaper towers, nacelles and drivetrains. Carbon, however, is far more expensive than conventional polyester technology, and debate continues to rage within the industry over which is the best choice and why.

From Siemens through LM Wind Power to GE, most companies stick to GRFP. LM Wind Power’s 73.5m blade for Alstom’s Haliade 150-6MW turbine is a good example of pure glass-fibre technology. Sandia National Labs in the US has built an enormous 100m glass-fibre prototype blade. Vestas and NEG Micon, which merged in 2004, were the first to use carbon. Today, Vestas Gamesa, Carbon Rotec and DeWind are the minority of manufacturers that publicly admit to using carbon in their blades. Vestas’ V184-8MW has carbon-reinforced shear webs in its blades, which helps them cope with enormous gravity loadings.

“The goal was to use the same turbine configuration, the same nacelle, the same hub and almost the same drivetrain, but to increase the rotor diameter and the energy captured,” says Christian Vogl, project manager rotor blades at Nordex. Keeping the rest of the turbines’ components as light as they were in the original N100 design was essential. “We calculated that the weight of the N117 rotor had to be approximately 11t; a pure GRP blade would have been 13–14t,” Vogl says. “The final blade weighed 10.2t compared with the original, smaller blade’s 11t. That was a big achievement for us.”

Reduced weight is not the only benefit to the new design. The spar cap in the N100 blade reduced from a width of 1.2m to about 0.5m while the thickness dropped from 0.50m to about 0.05m. This is a significant alteration in size, especially considering that the blades are longer and the loads bigger. This stiffer, thinner spar cap makes the blade less susceptible to flutter, and increases space for aerodynamicists to improve its performance.

“Using CFRP in the spar caps makes a more slender blade possible,” says Vogl. “There are fewer constraints on the design, and there are more options to optimise the blade – especially in the tip.”

Nordex worked with its partner Carbon Rotec to develop the manufacturing concept. The process used is similar to that used in previous GRP spar designs. The same resin is used throughout, which is a fast, low-cost and reliable method. “To keep the production processes simple, we decided to use an infusion process for the spar cap and we did not need any new special tools to work with the carbon fibre,” says Vogl. “The rest of the layup is conventional – a GRP sandwich material, nothing special.

“The spar cap is a pre-produced part built from pure carbon fibre with no resin. During the production process, we put it into the shell and conducted the vacuum infusion process to diffuse the resins, and then cured it.”

Carbon fibre is a highly conductive material and requires special safety precautions be taken when working with it. For example, cutting machines were air-driven and electrically powered to safeguard against short circuits. The element’s high conductivity also means that the carbon spar must be earthed or insulated to provide sufficient protection from lightning.

When developing the NR65.5 blade, Vogl and his colleagues used the same proven design that combines a carbon spar cap with GRP shells. Much work went into improving the aerodynamic performance. The root section moved the maximum blade cord closer to the root to increase yield and limit loads. The blade uses Nordex’s flatback profiles to increase yield across all operational wind speeds. The tip has a more slender outboard section to improve load and wake properties, which also reduces noise levels.

“The turbine has very good performance indeed,” says Vogl. “The sound-power level was less than expected, so it is quieter in operation: up to 1.5dbA less at normal operating speed. It’s an extra benefit for the customer.”

Carbon will play a continuous role in Nordex’s future – in evolutionary models such as the N131 and potentially in completely new designs. The falling price of carbon fibre can only help; it has almost halved in the past decade and continues to drop. However, Vogl says that carbon cost is only one variable to consider in the energy equation. “You cannot just look at the cost of the carbon or the rotor blade,” he says. “You have to look at the cost of the whole turbine, its performance and how that affects overall levelised cost of energy [LCoE].

“A carbon blade is much more expensive than a GRP rotor blade, but if you can use your existing tower, turbine and nacelle, and increase energy production to reduce the overall LCoE, then it makes a lot of sense.”

Factors other than manufacturing and delivery costs effect the LCoE calculation. For example, Nordex has paid a lot of attention to stripping cost out of the supply chain to justify using carbon. “We produce our CFRP blades together with other manufacturers,” says Vogl. “To do it on our own would probably be too expensive and not economically viable.” Nordex has invested €50 million in the past two years in extending the capacity of its blade production network. Of that amount, €25 million has gone into modernising and expanding its Rostock blade facility to handle bigger moulds required for the two carbon blades, and its new blade-finishing hall.

A carbon blade is much more expensive than a GRP rotor blade, but if you can use your existing tower, turbine and nacelle, and increase energy production to reduce the overall LCoE, then it makes a lot of sense.

The other €25 million has helped build a flexible international production network with partners Carbon Rotec and TPI Composites in the US. Carbon Rotec is building the NR50, NR58.5 and NR65.5 with the same vacuum infusion process and resins, while TPI is producing NR58.5 blades at its Turkish factory.

Other innovations that improve blade material performance include pre-formed, woven glass and carbon fibre architecture. Non-crimp and unidirectional fabrics – whose filaments can be directly aligned with the greatest loads – appeared long ago, but these 3D fibres are often touted as a way to save money in production and improve fatigue performance and composite strength due to exact fibre orientation and built-in defect reduction.

Suppliers such as 3Tex and Techniweave offer completely pre-woven structures such as blade roots and spars. The Unigirder from 3Tex offers a spar cap woven in a single layer that can be dispensed from a roll.

“If you go a trade fair, you can’t help but see these clever ideas,” Vogl says. “There are low-volume niches in industries such as the automotive industry where these ideas can definitely be used, but I don’t see any advantages in the wind industry. We will produce around 25,000t of composites this year using the traditional layup process, and it offers us the best balance of cost and performance.”

As the use of carbon rises, mixing carbon and glass to form hybrid composites is another area of research. Interleaving carbon fibre pre-preg with glass fibre pre-preg has been done for years and, as Nordex shows, using carbon with glass as component scale is well understood. Mixing carbon and glass at fibre level is a greater challenge, as handling the mismatch in each material’s specific behaviour when under load is much harder.

Carbon is about four times as stiff as glass fibre and deforms far less under tension, but performs worse when compressed.

Glass fibre expands with an increase in temperature while carbon does not. Adding hot resin to a pre-form that uses a mix of carbon and glass means that the resulting composite has built-in stresses that are prominent when it cools.

LM Wind Power is developing a hybrid carbon/glass fibre material that is at the prototype stage. With the price of carbon falling and manufacturers building longer blades, it looks like more wind energy companies will be looking to carbon to solve their needs.

EBRD sets out ambition to be majority green investor by 2025

EBRD sets out ambition to be majority green investor by 2025