Rehabilitation is not usually a term associated with newly built state of the art power plants. But that was what was required at the Longview supercritical plant in the USA. Staff report 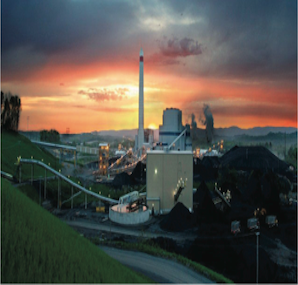 On 21 April Longview Power announced that the plant had completed 155 days of operation since restarting in November 2015 and over the five months had achieved a heat rate averaging 8900 Btu/kWh (39% efficiency), with a capacity factor of 96% and an equivalent availability factor (EAF) of 98.5%. The plant also consistently performed in excess of its 700 MW rated capacity.

During this successful run, Longview says it took advantage of historically low natural gas prices by co-firing natural gas for up to 20% of unit heat input without any additional investment. The 155 days of operation, which included co-firing with coal and natural gas, highlights how well positioned Longview is in using fuel choice and mix to respond to changing market dynamics, the company says.

In addition, the plant made use of what it believes is the “world’s largest mobile LNG facility”, which it has installed to ensure gas fuel supply is available for start-up and significant load changes when pipeline natural gas supplies are curtailed due to, eg, cold weather (with residential and key industrial users taking precedence) and/ or gas line infrastructure curtailments. The LNG facility provides Longview with full “inside-the-fence” start-up reliability during peak winter seasons allowing the plant to meet PJM capacity performance requirements, Longview says.

The plant claims to be the most efficient coal-fired power unit in the 13-state PJM Interconnection and one of the most efficient in the USA. Furthermore, the advanced supercritical boiler, low cost fuel source (thanks to its minemouth location) and other project efficiencies combine to produce the lowest cost of dispatch of any coal-fired plant in the region, Longview Power believes.

The plant is fully integrated with Mepco, LLC, its source of fuel (both the plant and Mepco being wholly-owned subsidiaries of Longview Intermediate Holdings), and is designed to utilise run-of-mine coal, avoiding the added cost and environmental impacts of fuel preparation. Mepco transports coal from its underground mines to Longview via a 4.5 mile long conveyor, which minimises transportation costs and avoids the significant environmental and local impacts from trucking coal or rail delivery, Longview Power points out.

In and out of Chapter 11

The plant (which cost about $2.0 billion, said to be the largest private investment in West Virginia’s history) commenced operations in 2011, but was beset by frequent outages and poor performance, with a large number of construction defects, as well as design and equipment issues (including tube leaks and boiler control system difficulties).

The performance problems combined with major changes in the power markets (notably the rise of fracking, lowering of natural gas prices and declining wholesale power prices) led to Longview Power (as well as its affiliated coal supplier, Mepco) filing for Chapter 11 bankruptcy protection in 2013.

By early 2015, however, Longview had reached settlement of all construction claims with suppliers (in particular Kvaerner, Siemens and Amec Foster Wheeler), with main contractors agreeing to correct construction defects at their own expense (as well as a settlement with insurers First American).

Consequently, Longview was able to emerge from bankruptcy in April 2015, under new ownership led by private equity firms KKR, Centerbridge and American Securities.(Whatwouldappeartobeafinal conclusion of the legal machinations was achieved in March 2016 with an agreement reached between Kvaerner North American Construction and Amec Foster Wheeler settling “all claims related to the Longview power project” and resulting in a cash payment to Kvaerner of $70 million.)

A major programme of remediation allowing the plant to get back on line and perform as intended was completed in November 2015.

A key element, and major contributor to the turnaround, was replacement of the Siemens T3000 control system with Emerson’s Ovation technology, which manages operations across the plant in an integrated way and has a good track record in dealing with the onerous demands of complex supercritical coal-fired plant applications, both new build and retrofit (with around 100 such installations to date).

Working “around the clock”, the automation replacement was completed in only 13 months, said to be “nearly twice as fast as a typical project of this scope” and a feat that “has never been done before”, Emerson and Longview believe. “Emerson’s ability to manage this comprehensive automation project within a very aggressive timeframe was instrumental in helping us bring the plant back online and generate electricity as quickly as possible,” says Steve Nelson, Longview’s chief operating officer. “Since we began using the new Ovation controls we’ve experienced drastically improved plant stability, enabling us to provide more reliable power to the grid – and generate more revenue.”

The Ovation retrofit aimed to increase stability by providing a more integrated control strategy for the boiler and turbine on a single, unified platform, enabling the plant to capture additional revenue by bidding into the regional grid operator’s ancillary services market for such functions as automatic generation control and synchronised reserve.

Under warranty, Amec Foster Wheeler replaced some 1000 tubes in the upper furnace of the boiler, to address tube leak problems and design and materials issues. The original tubes were made of T23 (which proved difficult to install and weld, a problem with advanced alloys that is all too familiar to supercritical plant constructors elsewhere) and were replaced with tubes of T12, which has less exacting welding requirements.

Improvements were made to fuel/air controls to achieve improved combustion (to reduce slagging, improve emissions performance and increase reliability). Boiler circuitry was improved and a simpler and more robust bottom ash system was installed.

Changes were also needed to the air quality control systems, principally because the coal turned out to be different from that initially expected, with 46% higher sulphur than anticipated. In September 2014 Foster Wheeler announced it had been awarded a contract by Longview to “rehabilitate and optimise” the wet flue gas desulphurisation system. The scope included new components as well as engineering and installation services to optimise the performance of the existing dewatering and forced oxidation systems in line with the fuel actually being used by Longview. Foster Wheeler installed an additional dual flow tray in the absorber (in addition to the one originally supplied) to increase the overall SO2 reduction capacity of the existing system to handle higher sulphur fuels (see MPS October 2015) and remain within the existing SO2 emission limits, requiring an increase in SO2 removal efficiency.

The capacity of the plant’s pulse jet fabric filter system was increased (under a contract with Southern Environmental Inc), to achieve greater than 99% removal of particulate matter.

In addition the SCR catalyst was replaced, under a contract with Haldor Topsoe.

There were also problems with the generator, dealt with by Siemens at its own expense.

Longview is fully compliant with the new federal Mercury and Air Toxics Standards, with emissions well below the permitted limits. However it doesn’t meet EPA Clean Power Rule requirements for CO2, as currently formulated. According to Longview it emits 1649 lb of CO2 per MWh generated, while the EPA is calling for 1400 lb/MWh. This means there will be new challenges ahead should that rule finally be enacted.