The world’s largest wind turbine blades, stretching up to 100m, are under development in the UK. Incorporating carbon fibre and using an innovative modular manufacturing technique, it is hoped the new blades will bring down the cost of offshore energy and restore investor confidence in the sector. Jack Wittels speaks to Andrew Scott, programme manager of offshore wind at the Energy Technologies Institute, about the challenges and rewards of designing these enormous prototypes. 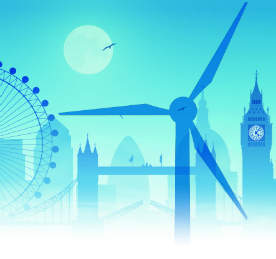 The UK’s offshore wind sector has excellent potential. Although current capacity is already at 3.7GW – as much as the rest of the world combined – it is expected to increase to 18GW by 2020, by which point offshore installations will supply 18-20% of the UK’s electricity annually, according to energy trade association RenewableUK.

However, despite the 3.8GW of additional capacity under construction or awaiting planning approval, along with a further 7.8GW in the planning system, there are doubts that this target will be reached. Indeed, a senior figure from RenewableUK has said he would be happy if the sector reached 10-12GW by 2020; 33% less than expectations.

The greatest threat facing offshore development is the high cost of energy. Potential investors are often put off by the slim rates of return. UK ministers have also said they want to cut the sector’s energy costs – which are currently around three times the UK market price – down to £100/MWh by 2020. But doing so will require major technological innovation.

Towards a 100m blade

"To get the cost of energy down to a sensible level, we’ve got to see turbines getting up to about 10MW with around 100m blades," says Andrew Scott, programme manager at the Energy Technologies Institute (ETI). "Therefore, we have to find ways of creating technology that will deliver a 100m blade."

Responsible for the ETI’s offshore wind programme, which is focused specifically on reducing long-term offshore energy costs through technological innovation, Scott is confident that larger blades and higher capacities hold the key to improving efficiency. One of his current projects, with UK SME Blade Dynamics, aims to do just that.

Announced in January 2013, the project will construct the largest prototype blades in the world – stretching between 80 and 100m in length. Taller than Big Ben’s tower in London (96m), they are intended for use on the next generation of large offshore wind turbines, which will have a capacity of 8-10MW. Despite the additional manufacturing costs, Scott believes such a significant increase in the amount of power each turbine produces will bring down the price of energy enough to improve overall cost-efficiency.

The pros and cons of carbon fibre

One of the key challenges of developing longer blades is that even a small addition to the length of a typical fibreglass design results in a large change in mass (it rises at the cube of the length), and the subsequent extra weight can quickly put too much pressure on a turbine’s drive train. Some companies have managed to reduce this ratio by adjusting the location of the blade’s stronger parts, but improvements have been relatively slight.

To significantly add to blade length while still keeping weight down, developers must begin working with lighter materials. By incorporating carbon fibre into its design, Blade Dynamics hopes to reduce the weight of more traditional fibreglass blades by up to 40%. This will allow turbines to have longer blades without placing too much stress on the structure.

Carbon fibre can, however, be a difficult material to work with; it has a relatively low damage tolerance and even small fibre misalignments can have a major impact on its compressive strength. Most significantly though, it is considerably more expensive than traditional glass fibre. Indeed, some believe the material’s cost will outweigh the value of the additional energy created by the longer blades it facilitates.

"We have to find ways of creating technology that will deliver a 100m blade."

"I think that if you made a blade only from carbon fibre, that [criticism] would be true," says Scott. "The Blade Dynamics blade incorporates carbon, but it is not the only material.

"You’re actually putting in less material in total, so you end up with a blade that’s probably going to cost no more than a conventional design, but is much lighter. And that lightness brings advantages for turbine manufacturers – it places less strain on the drive train and the power system."

Despite Scott’s enthusiasm for the material, not everyone in the sector shares his opinion. Some blade manufacturers are reportedly upgrading from E-glass to speciality high-strength S-class fibre. Others are concerned that future demand from the growing wind and aviation sectors will outstrip supply, limiting availability and causing prices to rise.

Beyond facilitating the extremely large, lightweight blades necessary for 8-10MW capacity turbines, carbon fibre designs could also be used to enhance current wind farms. By retrofitting the longer blades onto existing turbines, swept area could be significantly increased, resulting in more energy generation. The material’s lightness would also mean that strengthening the turbines’ structures would not be required.

"It would probably be quite difficult to retrofit it onto a turbine that’s actually out and installed," Scott says. "If you look at a longer blade, you’ve got the whole issue of clearance to the base of power and so on.

"But you can imagine people looking at them and saying: ‘Well, if I could get a lighter blade, I could sell my existing turbine into a class II market where the wind’s lighter and, by effectively having a larger swept area, I could extract more energy from it."

Along with its innovative use of carbon fibre, the project is also experimenting with a new modular approach to manufacturing.

Rather than building two sides of the blade and joining them up, a number of components will be constructed separately, then connected together.

"It’s the assembly of a kit, but the techniques for doing it are extremely sophisticated and result in very high-quality joining," says Scott. "The reason modular manufacturing is of real interest is that it allows the introduction of modern production techniques, which result in a high-quality finish and are extremely repeatable."

He goes on to describe how, using a 49m design, Blade Dynamics built three blades with under 1kg in weight variation between them, despite each one weighing over ten tons.

A modular approach to manufacturing can also help with the inevitable transportation issues surrounding such blades. The different parts can be moved separately to somewhere near the offshore site for assemblage – far easier than shifting a single 100m blade. Putting the parts together, however, still requires a factory environment.

"You need to create investor and developer confidence, and this comes back to the importance of UK test sites."

"There’s a balance," Scott comments. "It’s probably going to be inherently more expensive to do the assembly close to the wind farm, but you do save on transport costs. What modular construction does is create logistics options, which is useful.."

The key question overhanging this project is whether it will attract enough industry interest to kick-start mass production. According to Scott, there have already been some positive signs; Blade Dynamics is working with a large wind turbine manufacturer, and has been in discussions with other big sector players. However, he still thinks more could be done to further increase the chances of large-scale manufacturing,

"You need to create investor and developer confidence, and this comes back to the importance of UK test sites. You need to have sites available where you can test these bigger machines with large components," says Scott. "You also need a good track record, and to engage credible companies."

"It’s new technology; it’s risky, but it captures the imagination of some of the big players," he adds. "We’re expecting it to work, but like any R&D project, it might not."

For the project to succeed, Blade Dynamics must prove it is not only possible to create 80-100m blades, but also that it can be done in a way that reduces the overall cost of offshore energy. Beyond this, however, there is little the company can do. Ongoing debates over the UK’s contract for difference regulations, emissions targets and the wider supply chain will all strongly impact upon future investment.

However, there is reason for those involved with the project to remain quietly confident. The offshore sector is steadily moving towards ever larger turbines; each of the new London Array site’s phase-one models has a capacity of 3.6MW – small in comparison with Blade Dynamics’ technology, but proof that size is increasing.

Moreover, the Crown Estate’s pathway study suggests that, in future, the greatest reductions in the levelised cost of energy will be for bigger turbine types, specifically 5-7MW from 2014 and more than 7MW from 2017, suggesting a stronger investor focus on these technologies in years to come. In the end, while there is no way of knowing what will happen, projects that push the boundaries of blade size have more than a sporting chance of long-term success.