The Nam Theun 2 hydroelectric plant is a landmark project in Asia and the biggest construction project ever undertaken in Laos. Landlocked and heavily forested, the location of the site presents its own challenges to the contractors selected to work on the project. Here we look at how drilling was performed in such difficult conditions 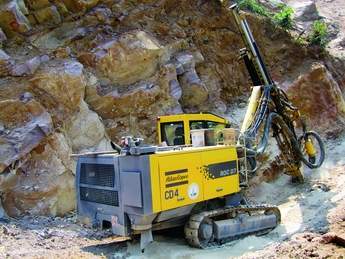 WORK on the Nam Theun 2 (NT2) hydroelectric project officially started in May 2005, one month after Electricité de France (edf) signed the contract taking responsibility for construction. EDF then divided the work into three sub-contracts; tunnelling, power station and dam construction. Upon completion, the NT2 plant will have the capacity to generate 1070MW of electricity, of which 93.5% will be exported to Thailand.

Site preparation work for the project began in 2004 with the construction of access roads to the site. In June 2005 work started to drive the tunnels and over 3000 workers now populate the site. The scheme includes construction of a dam wall measuring 39m high by 436m wide, to be constructed at the Nakai flood plane. When ready for operation the dam will create a reservoir of 450km2.

A channel transfers the water 70km to the intake tunnel for the power generating plant. From there the water flows at a downhill gradient of 10% before dropping into the 200m high vertical pressure shaft before a final drop in a steel-lined tunnel to the turbines. The face area of the 1.43km pressure tunnel ranges from 90m2 down to 60m2 as the tunnel narrows before joining a manifold that splits the flow into four streams – one for each turbine.

The water runs a total distance from headrace inlet to turbine for 2.75km before running 27km in an open tailrace downstream to the Xe Band Fei river which ultimately joins the Mekong river. The NT2 project also involves the construction of a 138km 500kv transmission line to the Thai border to allow export of the electricity.

The Japanese company Nishimatsu Construction was awarded the tunnelling contract and looked for a partner that could provide reliable drilling and maintenance services for the project. Most important to Nishimatsu was that the winning partner could provide a fixed-cost service and had the infrastructure and expertise to offer reliable maintenance in what is a very demanding environment.

Landlocked and with poor accessibility to the worksite, the chosen partner would need to operate self-sufficiently and ship in all the facilities and spare parts it might need during the contract. Atlas Copco was chosen as the winning contractor.

It would be no easy task to provide the drilling equipment and associated maintenance; in the wet season, the near-constant rainfall complicates the simplest of operations and the remote location means that if you haven’t brought a part or tool, you’ll have to go without it. The pay-for-performance drilling contract meant that only drilled metres would be paid for at a guaranteed, fixed price.

The local Atlas Copco office based in Thailand set about coordinating the project and called in Rainer Backman, a Senior Service Advisor from the Hong Kong office, to assist with the set-up phase. A seasoned veteran of many remotely located and technically challenging projects, Backman was charged with setting up a base close to the worksite and training the operators on the drill rigs and associated equipment.

As the local population consists mostly of subsistence farmers, like everything else on the site, drill rig operators and other skilled workers had to be imported from outside of Laos. ‘It is very difficult to find skilled workers and even get the raw materials. To do the job, everything has to be imported,’ says Makoto Oi, Operations Manager of Nishimatsu.

Atlas Copco’s fleet of rigs at the site consists of three Rocket Boomer L2 Cs, one Rocket Boomer 352-1B and a Rocket Boomer 322-1B. The Atlas Copco set-up on site carries out service and maintenance of the rigs. It includes a self-contained unit comprising a hose workshop, regrinding facility, administration office and spare parts centre. A complete spare rock drill was also brought in at the start of the contract to provide backup but has not been needed so far.

Apart from routine servicing, the fleet has had no significant problems and has maintained an effective availability of 100%, testament to the US$520,000 investment in the maintenance facility and the commitment of the men on the ground.

Atlas Copco’s Martin Karlsson, Area Manager, Aftermarket, says that things so far have gone according to plan: ‘The maintenance support is working very well. We did thorough preparation to ensure we had the infrastructure to cope with the remoteness of the site and the commitment from the guys on the ground has produced a superb record of rig availability and maintenance.’

Service at the site is provided round-the-clock by a team of eight maintenance engineers and several assistants. Whenever a rig is needed it can be brought to the face, regardless of the time of day or night and each rig is allocated a service engineer who is responsible for keeping the rig ready to drill.

Tunnelling on the project consists of progressing four faces through predominantly sedimentary sandstone and mudstone rock, amounting to a total of 4000m of excavation. The headrace tunnel is being advanced from either end along with a service tunnel and high-pressure tunnel.

Drilling one round with the Rocket Boomer L2 C drill rigs takes between 90 and 100 minutes and the 48mm blast holes are charged with Anfo emulsion. Penetration rates range from 2.5 to 4m/min resulting in an advance rate of 150m per month at each face.

The bits used are 45 and 48mm ballistic button bits mounted on 4.3 and 4.9m rods. The cut holes in the centre of the drill pattern are reamed to a diameter of 102mm using domed bits. Four regrinds at the on-site facility is enough to get the bits through their 1000m lifetime with the shank adapter lasting for more than 6000 percussion hours. The hauled waste is removed and used around the site to improve its infrastructure.

Reinforcement of the tunnels is carried out with Swellex rock bolts, shotcrete, mesh and, where necessary, reinforced arches. Three and four-metre Swellex rock bolts are used on site to secure the excavated tunnel’s wall and roof. For the installation of Swellex bolts, 43mm diameter holes are pre-drilled by the Rocket Boomer rigs.

Atlas Copco equipment is also being used at Nam Ngum 2 to drive a 4km diversion tunnel upstream. The tunnel will be used to regulate reservoir levels and allow water drainage for periodic inspection of the dam shields. Contractor Right Tunnelling runs the contract and has assembled a fleet of Boomers and surface crawler rigs including four ROC D7-11s, six CM 348s and six Rocket Boomer 352s with two MB1600 hydraulic breakers completing the excavation fleet.

The tunnel is being driven through the sandstone and siltstone mountain using the drill and blast technique. As with the tunnels at NT2, the Rocket Boomer rigs are extracting an 8m high topheading before crawler rigs (ROC D7-11s) move in to bench blast the floor, removing a further 5m of rock.

Working two shifts for the drilling, Right Tunnelling is aiming to advance at the rate of 4.2m a day employing 136-hole rounds. The charge holes are 4m deep in normal conditions. Keeping progress up-to-speed on the site is critical for the contractor as the diversion tunnel must be ready by the end of the next dry season when the river is scheduled to be diverted and the dam is built in mid-2007.