Trashrack cleaners at hydroelectric plants on the river Mur have been refurbished, upgraded and fully automated, as W Radhuber explains 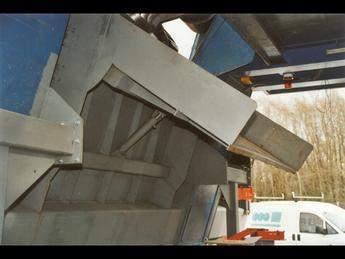 The Styrian electric supply company Steweag (today known as Verbund) has been operating Hydroelectric Power Stations on the river Mur for decades. These power stations are equipped with various types of trashrack cleaners – all wire rope operated -, with a year of construction from 1927 up to 1981. From 1998 to 2001 the trashrack cleaner’s of seven plants were refurbished, upgraded and fully automated. Today the standard trashrack cleaning procedure is carried out unattended by all engines.

All cleaners were operated by hand from the control station. The debris transport and disposal was also handled manually, which meant that at least one operator had to be continuously on site when the trashrack cleaner was in operation.

At Gralla and Pernegg power stations, the rail-mounted driven container wagon is directed by the operator from the control platform to the dumping station. The debris is then dumped to the low-lying debris disposal site.

Operation at Gabersdorf, Spielfeld, Obervogau involves four wheel-driven dumpers, placed under the throw-off chute of the trashrack cleaner. Every time the cleaner changes its position, the driver of the truck also must change the truck’s position. The full truck is driven to the debris disposal site and emptied.

Under normal operating conditions at both types of power stations the debris can be collected easily by the trashrack cleaners. The diversion canal power stations are less influenced by high water. The greater part of the big-sized floating debris passes the weir and doesn’t reach the trashrack. Debris not removed by the rake is picked up by the crane with the timber grab.

Run-of-river power stations are much more influenced by high water. Enormous quantities of driftwood reach the trashrack and have to be drifted over the weir or picked up by the rake or the crane.

At normal water flow the floating debris can be pushed by the surface-rake from the trashrack area to the weir and then drifted over a lowered gate to the tail-water.

During rainstorms the driftwood comes with such a velocity and in such quantities that drifting over the weir is no longer possible. Within a very short time a carpet of driftwood with a thickness of 1m or more is built up, compact enough to walk on it. This material can not be drifted: even a heavy duty surface rake is not able to rip up such a large amount in movable and driftable portions. In this case only a mobile excavator or a crane with the timber grab can help.

The purpose of the refurbishment project was the fully automatic, unattended operation of all trashrack cleaners

To achieve this purpose it was necessary to

• Overhaul the structure and the mechanical equipment.

• Replace the electrical equipment and the control system.

All mechanical equipment of the cleaners, such as the rake, winch, travelling gear etc. had to be completely overhauled. Hydraulic power packs and hydraulic piping had to be replaced. The electrical control system including sensor technology (distance sensor, limit switches etc.) had to be changed to SPC, all control boards, cable drums, cablings had to be replaced, too.

According to the described requirements all cleaners had to be equipped with a crane with timber grab or orange peel bucket.

The lightweight surface rakes of the cleaners at the run-of-river power stations in Spielfeld, Obervogau and Gabersdorf had to be replaced by heavy duty equipment.

The debris handling equipment had to be overhauled or replaced, and the capacity of the debris containers had to be increased.

The winches of the trashrack cleaner at Laufnitzdorf and St. Dionysen were replaced, while all others were overhauled and equipped with the state of the art safety and control devices (e.g.slack rope detection). The rakes were repaired, the wheel bearings replaced and the wheels tyred with Polyamid wheel-treads.

Most of the cleaners were equipped with hydraulic operated throw-off chutes to simplify moving the container wagons and trucks.

To accept the additional load by crane and surface rake operation the stressed structures of all cleaners had to be considerably reinforced. The existing structure of the small cleaners was stiffened by a parallel structure of rectangular hollow sections.

The big cleaners were stiffened by a large-sized horizontal rectangular hollow section. This stiffening beam is placed above the wheels and has an overhang on both ends of the cleaner to carry the crane and the surface rake. On both ends the beam is connected with an additional load spreader to the frame. As a result the torsion and bending loads from crane and surface rake operation are distributed to the frame of the engine.

A nearly vertical position over the total height of the frame was selected for the stiffener beam for the Gralla cleaner, as a horizontal position was not possible in this case.

The winch house of the Gralla cleaner was lifted by 800mm to allow more space for a bigger debris container.

The surface rake in this case has an additional vertical rotation axis to push the debris from the trashrack upstream and then turn it parallel to the trashrack to be able to pass the columns between the turbine entry ducts.

The original container wagons at Pernegg and Gralla were replaced, with the new ones fitted to the existing railways.

The small container wagon in Pernegg was designed as ‘wireless satellite’. Electric energy is supplied by a vehicle-mounted set of accumulators. During cleaning operation the vehicle is coupled up to the trashrack cleaner and the accumulators are charged. The electromagnetic coupling between motor and drive wheels is released. If the container has to be emptied, the cleaner stops cleaning operation and releases the connection between itself and vehicle. Until the return of the vehicle the cleaner is at rest.

By releasing the coupling between the cleaner and vehicle the activity of the container wagon is started. Motor and wheels are connected by the electromagnetic coupling and the vehicle drives self-controlled to the dumping station. The container is dumped automatically (side tipper) and emptied. The container returns to its prior position, the vehicle drives back and is coupled again to the trashrack cleaner. The cleaning programme continues.

The big container wagon in Gralla is also designed as a satellite with electricity supplied by a cable drum. This container is a rear tipper.

The trucks have to accompany the trashrack cleaner for a considerable distancein both directions. As it is difficult to achieve a straight run of an unguided pulled and pushed truck, the solution used for the container wagons was not applicable.

As a result the cleaners were equipped with platforms to carry the trucks, positioned under the throw-off chute The truck is on board the cleaner moving synchronously. If the container has to be emptied, the cleaner stops the cleaning operation. An operator drives the loaded truck to the debris deposit area and the unloaded one back to the cleaner.

To enter the platform with the truck, moving access ramps are provided. These ramps are kept by rubber springs a few centimetres above the floor. The weight of the truck pushes the ramps to ensure stepless access to the platform.

All cleaners are equipped with radio control systems. All trashrack cleaning functions and the surface rakes can be operated by remote control. At Gralla, the crane is also remote controlled.

For position indication a laser telemeter is used in Gralla and Gabersdorf.

For the other cleaners a very simple heavy duty shaft encoder, consisting of a toothed wheel and a limit switch, is used.

At a certain position of the trashrack cleaner an automatic reset of the encoder ensures accurate position indication.

Visits to the plant and meetings with the plant managers indicated that generally all systems work satisfactory. However, some remarks were made.

• The laser position indication system works very accurately, but it is not weatherproof. Dew on the mirror, rain, snow inhibit the reflection of the laser beam and the system fails.

• Because of the absence of a hydraulic driven movable throw-off chute at the Gabersdorf trashrack cleaner the truck cannot pass to the other side of the cleaner to be loaded by the crane. A retrofitting of the cleaner is desirable.

• For safety reasons, a radio control system should be fitted at the cranes of all trashrack cleaners.

This paper was originally presented at the 13th International Seminar on Hydropower Plants, held at the Vienna University of Technology. For further information on the seminar, contact Dr Eduard Doujak, email: edoujak@pop.tuwien.ac.at