Arresting performance in the Russian arena

Applications in South Africa, and more recently in Russia, have proved the worth of transmission line surge arrestors as protection against outages caused by lightning strikes. 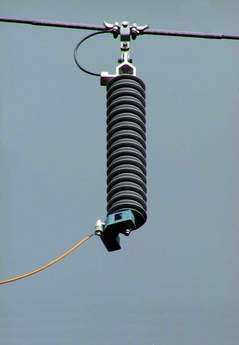 Ask an electricity consumer what is important to him, and he is likely to say ‘supply at the cheapest price’ and ‘reliability and security of supply’, in that order. In most people’s minds, the response ‘supply at the cheapest price’ is considered the most important. That is, most important until the supply fails. In today’s competitive electricity market, a power utility’s effectiveness is measured in terms of minutes of supply, and those that do not measure up may risk large compensation claims for interruptions in supply. To the likes of sensitive process industries, even a brief loss of supply can be just as costly as a long-term outage. Price becomes irrelevant when the power is off.

Figure 3. Using a lightning vulnerability profile to determine the location of arrestors

Preventive maintenance, application of station arrestors and inbuilt redundancy increase the reliability of substation equipment. In the network as a whole, supply interruptions are often related mainly to faults in transmission of power by overhead lines.

However, on their own, these may not be sufficient to give the required improvement in line outage rate that today’s demanding business climate requires. Installing a duplicate system or increasing insulation withstand is expensive, as is reducing the footing impedance; shield wires are difficult to retrofit and may not significantly improve reliability. As a viable alternative surge arrestors have an important role to play in improving the reliability of supply along HV transmission lines. Investment in innovative solutions out on the line itself can be a cost-effective method of improving the overall system outage rate.

When arrestors are applied to the protection of transmission lines, they are commonly called ‘transmission line arrestors’ (TLA) to differentiate them from standard substation arrestors. Various design solutions exist on the market, but polymer-housed arrestors dominate the field because of their robust and lightweight construction, which permits them to be suspended directly from the line or an existing structure.

TLA based solutions offer an efficient and cost-effective alternative for minimising, or even eliminating, outages caused by lightning strikes and for limiting switching surges along transmission lines. Application of TLA also opens up further possibilities for compacting lines and the upgrading of existing lines.

ABB’s TLA concept is called PEXLINK. It consists of a PEXLIM gapless ZnO surge arrestor fitted with suitable line hardware, coupled to a disconnecting device that operates if the arrestor is overstressed and fails (Figure 1).

The Pexlim family of silicone polymer-housed surge arrestors employs a unique, patented design to enclose the (ABB manufactured) ZnO blocks in a pre-compressed open-cage module formed from glass-fibre reinforced loops together with a special flame-resistant fibre-winding. The outer housing of silicone rubber is thereafter moulded directly onto the internal components to form a void-free and totally sealed housing. The final TLA is built-up from modules of different ratings (ie lengths) and completed with the required grading rings (where needed) and hardware to suit the application.

Arrestors limit overvoltages to an acceptable level by diverting the applied surge current to ground. This action can avert an insulation breakdown from, for example, lightning strike or switching surges. A correctly selected and dimensioned arrestor can divert such surges almost endlessly, provided the energy to be dissipated is within its capability. That said, by definition a surge arrestor is principally a sacrificial protective device, designed to operate to protect other electrical equipment under all circumstances and so during the normal course of events it may need to sacrifice itself at any time to protect the primary plant.

Notwithstanding the logic of this position, ABB’s philosophy is that since the intention in using TLA is to reduce the overall outage rate of the line, Pexlink must be securely designed and dimensioned so that it does not itself unnecessarily contribute to the outage rate.

Pexlim arrestors have been used for any years to protect equipment in substations and their performance is well known. Their characteristics of high energy withstand, secure sealing, high mechanical strength and safe short circuit failure mode, can, say ABB, bring substation levels of performance out on the transmission line. Figure 2 shows the results of applying the device to Eskom lines.

The use of a silicone polymer housing is acknowledged as the most suitable for long-term service in all kinds of environments and pollution levels because of its ability to recover surface hydrophobicity as well as resistance to material ageing from, for example, UV-radiation, all of which help to reduce the regular maintenance burden.

Energy demands on a TLA can vary from moderate to extreme, depending on the line arrangement and geographical location. Compared to substation arrestors, TLA are exposed to potentially higher and statistically more frequent lightning impulses, with corresponding greater risk for overload. Even in cases where moderate energy handling would be sufficient, the high-current withstand capability must be great and distribution-type arrestors may not therefore be suitable. To minimise the failure risk, Pexlim arrestors of suitable energy class would be selected.

Arrestors must be mechanically robust, being fully exposed to the elements high up on transmission lines. The mechanical strength of polymer-housed arrestors is often related to electrical capability and so even when energy demands are moderate, distribution-type arrestors may not be suitable mechanically. This applies both during normal service and after overload; since it is imperative that the TLA does not break apart to the extent where it falls, and causes damage or injury. All primary and auxiliary components used in Pexlink are chosen to cater for anticipated mechanical loads from wind, rain, ice, seismic shock, short-circuits, etc, to ensure a high margin of safety regardless of whether electrical or mechanical parameters are decisive for a given case.

The insulation of substation equipment is generally non–self–restoring and should not be left unprotected. Automatic disconnection of substation arrestors in the event of their overload is therefore not recommended. Conversely, TLA typically protect line insulator strings that have self-restoring insulation. Furthermore, since TLA are often difficult to access along the line, automatic disconnection of Pexlink is advantageous and necessary to permit recharging of the line in the event of arrestor overload, if indeed the transient fault causes a breaker operation at all. This functionality is achieved by inserting an automatic disconnecting device in series with the arrestor. The design used as part of Pexlink is robust and reliable, as it must be, since spurious operations would reduce the overall reliability and lead to doubt regarding the condition of a disconnected arrestor.

Lightning strikes directly to the line or nearby can lead to frequent line trips. This is the reason why HV lines are typically fitted with shield wires to capture the lightning strikes of a magnitude which could cause a flashover across the line insulators. The intention is that when lightning strikes the tower structure or shield wire the lightning discharge current will flow through the tower and tower footing impedance (TFI), safely and effectively diverting to ground. However, if the footing impedance is sufficiently high, a large potential difference across the line insulation can result such that a flashover occurs from the tower to the conductor, that is, a backflashover, and a breaker trip will occur. The risk for backflashover increases with increasing footing impedance.

By locating Pexlink on selected towers along the line (Figure 3), the individual tower insulation is protected from abnormal lightning surges (frequent or high amplitude) and the overall number of outages due to backflashover will be reduced. The additional indirect benefit is that sensitive substation equipment is not stressed by heavy surges and circuit breaker operations are reduced; which in turn leads to savings in substation maintenance costs.

Figure 7. The low weight and compactness of Pexlink allow it to be suspended directly on the line

In order to improve reliability or to increase power supply in limited right-of-way, two (or more) circuits may be strung on the same tower. Whilst a single-circuit fault may not significantly affect system stability, double-line faults must be avoided. With Pexlink installed in at least one of the circuits, not only can double-circuit faults be eliminated, but the lightning performance of the other circuit is inherently improved as well.

One such example is the application of Pexlink on a 400 kV transmission link between the Vyborg substation in Russia and Kymi/ Yullikkala in Finland. The link has been regularly troubled by outages owing to lightning strikes on a double-circuit section on the Russian side which passed over terrain with poor earthing. The number of lightning-related outages on this section was considered unacceptably high given the importance of ensuring a stable transfer of power to Finland, and a target rate was set by the utility at one double-circuit outage per two year period.

in outage rate. Further, the study permitted selection of the appropriate Pexlim arrestor to cope with the anticipated energies involved; both from lightning strokes to towers or shield wires as well as shielding failures. In the end, 40 double-circuit towers of the total over 100 towers out from the substation on the Russian side were fitted (Figures 4–7) with Pexlink TLA incorporating Line Discharge Class 3 surge arrestors (Pexlim Q).

During the two years since installing Pexlink, no double circuit line trips have occurred on the Russian side of the line (Table 1), despite the fact that lightning activity along the line was

as high as previous years, illustrating the effectiveness of Pexlink in reducing lightning related faults, potentially to a greater extent even than the target outage rate.