An unprecedented display of power

Over 77 MW of temporary generation was required to power the 2008 Beijing Olympics, two thirds of it for the Broadcast Centre alone where 46 generating units and 70 km of cable were needed to supply 48.2 MVA, the largest single deployment ever required at the Games. The whole enterprise required great things of sole generating contractor Aggreko. 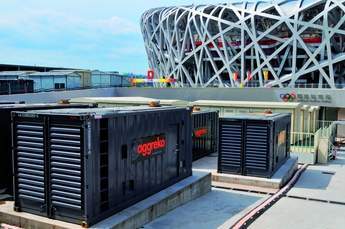 The supply of temporary power for the Beijing Olympics 2008, probably the most complex sports event in history, was no easy task. Aggreko provided

140 MW of temporary power (including back-up) across 37 venues in three cities, Beijing, Qingdao and Hong Kong. A total of 267 generating units powered the entire games via 2000 distribution panels and 470 km (290 miles) of cable.

Over 50 news organisations broadcast from the international Broadcast Centre including all the major television and radio networks worldwide – a total of around 14 000 people in the building – reaching an audience estimated at 4 billion worldwide.

The entire powering project took over two years to complete from initial design work to the completion of installation, including the sourcing of equipment from various Aggreko depots all over the world.

The role of temporary power rental companies at a high profile sports event such as an olympiad is first to bring the appropriate experience to the planning stages and secondly to provide the expertise to deliver the necessary equipment and the specialist operating teams to ensure uninterrupted power throughout the event. For most of the stadiums the power supply systems had to be fully tested and fully operational two weeks before the event, but for the IBC this figure was two months. Then after the games had finished power supplies had to be maintained at all venues, and in some stadiums even longer for the Paralympics, which started 12 days after the closing ceremonies and continued for another 12 days.

The majority of large sports events take place in one large venue which presents one set of power problems, but the Beijing olympiad was different – nearly 40 venues with differing requirements as well as the International Broadcast Centre and the Media Centre. Each of these venues had to be treated as an individual project.

Aggreko, a specialist power rentals company and the world’s largest since its purchase of GE’s operation in Asia, was appointed as the official supplier for the Beijing 2008 Olympics owing mainly to its past experience of providing temporary rental power for successive summer and winter Olympiads.

The planning process with the Olympic organising committee started two years before in 2006. The ‘hands-on’ logistics got started during March 2007 when the power generation and distribution equipment, plus operations personnel, came into the equation. This forward planning over a year ahead of the event itself was critical as the equipment needed to be identified and marshalled for the project from around the globe. Then it was shipped to Aggreko’s Dubai depot for full safety and operational inspections before being sent to China.

The first generators arrived towards the end of February 2008 in the Chinese port of Tianjin (Xingang) where Aggreko had established a warehouse depot for the project. Transport to site was by flat-bed trailers. Accurate timing was critical as the equipment had to be off-loaded as it arrived on site, where there were no parking areas for the 40ft trailers, and the cranes would be readied for offloading at specific times.

Training local personnel was a vital feature of the project. Aggreko hired seven office staff to work in their new Beijing office, as well as 40 interpreters and around 150 local workers who work alongside its technicians on-site. Some may be hired permanently by Aggreko for their developing power rentals business in China.

The next logistical task, already being analysed before the games even started, was that of dismantling and removing the equipment after the closing ceremony on September 8. Most of the equipment would be shipped to various Aggreko hubs around the world, and some would go to Vancouver where the 2010 Winter Olympics power project is on the drawing board.

On the job learning

Particularly for the installation and commissioning of the dedicated power systems, it was access to the sites which presented the main problems. The reason for this was that many of the venues were still under construction as Aggreko started to move in its heavy equipment. So access for cranes, delivery flatbeds and trucks was hindered and in some case initially impossible until solutions were worked out.

The delivery of equipment to the National Stadium, or ‘Bird’s Nest’ as it has become known, seemed at first sight extremely challenging. The problem was that the power generation area was located in a place with no access for heavy vehicles. A solution was found by investigating the underground structures to find a safe route over sufficiently supported areas, and using heavy duty steel plates to cover stairs and steps where necessary. It was also necessary, because the crane to be used for the lift could get no closer than 35 metres from the power area, to employ a very large crane, with a 300 ton capacity, to position the five 18 ton generators, ancillary equipment and fuel tanks into the below-ground generation park.

From the very beginning of the project, Beijing Electric Power and Aggreko set out to establish an effective working relationship in which the ‘power partnership’ would able to meet the goal of providing a reliable supply of quality power to all the Olympic venues. This was not a simple task as the two organisations and their inherent cultures had to learn to work with each other and to develop practices that would provide the ultimate power supply solutions.

The necessity for this co-operation was most marked in dealing with the fact that every venue had its own set of power requirements, so there was no ready-made power solution to be applied to all the stadiums and locations.

To give some idea of scale, the 23 MVA for lighting, broadcast and other events such as the opening and closing ceremonies at the National Stadium (the ‘Bird’s Nest’) required the deployment of a total of 29 generators, 130 distribution boxes and 45 000 metres (28 miles) of cable. At the Aquatic centre (the ‘Cube’) the 5.9 MVA of power for field of play lighting and broadcast needed eight generators, 80 distribution boxes and 37 000 metres of cable, while at the International Broadcast Centre (IBC) 46 generating units and 80 000 metres (44 miles) of cable were needed to supply 48.2 MVA of power, the largest temporary requirement ever in the history of the Olympic Games. The generators themselves came from the company’s standard fleet of diesel powered units in nine different sizes ranging from 30 kV to 1250 kV.

The power supplies for broadcasting were a special case because the broadcasters required two types of power supply – ‘domestic’ for general purposes and ‘technical’ for broadcast purposes. Domestic power was utility supplied with back-up from unit (ie single) generators and the technical power from the utility but with twin pack generators which provide 100% built-in redundancy, the whole scheme providing a guarantee, by any reasonable measure, of uninterrupted power.

A vital element was that the power had to be of the highest quality, mainly because of the electrical intolerance of the extremely modern equipment being used by the broadcast companies. This kind of equipment is susceptible to power surges and losses which result in noise, or signal fluctuations, or in extreme cases no signal at all.

For an Olympics event the forward planning for the power requirements of the broadcast media covering the Olympics normally starts years before the event. The first steps begin when the initial estimated power requirements of the broadcasters are received, communicated by means of a document prepared by the broadcasters themselves called a ‘Venue Survey Report’ or VSR, which identifies the broadcaster’s power needs through layout drawings with the position of the equipment and a list of the power loads. The VSR plan is updated about every six months as more information about the stadiums is received by the media. As time goes by the revisions become more detailed as they define the power distribution to the terminal loads.

The VSR documents contain excellent detail from the media’s point of view; however it lacks technical detail and needs to be interpreted by an experienced supplier, which can then design the critical power systems that will supply uninterrupted power. This is where experience of past events comes in.

Another factor was that the IOC stipulates that 50 % of the special flood lighting at all outside fields of play at night, and at all events being held at inside venues, must be supplied from an independent source. This stipulation applied to all venues.