An assessment of Polish power

How is the Polish power industry meeting the immediate challenge of the post-independence period, and those posed by its Kyoto obligations and EU legislation? The country’s power supply relies mainly on coal fired plants, with renewables making a very small, although increasing, contribution. Supercriticals are likely to play a larger role, but in the long run, with an expected annual increase in demand of 2 – 3%, a return to nuclear power cannot be excluded. 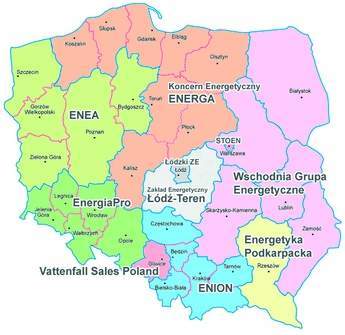 Electrical energy production in the majority of EU member states is based on their own internal energy resources, which for central and eastern European countries means that power generation relies mostly on solid fuels, ie, varieties of coal. In Poland, which possesses rich deposits of hard coal and brown coal, these fuels make up approximately 96% of the mix for the whole range of electric power production.

The power sources in developed Western European countries are an entirely different mix. 34% come from nuclear power, 27% from solid fuels, 16% from gas, 15% from renewable energy sources, and 8% from oil. A comparison of energy sources in the ‘earlier’ and the ‘new’ EU countries after 1 May 2004 indicates that indigenous mineral fuel resources are an essential factor in the structure of power production in the new EU countries.

Most of the hard coal comes from two of these, GZW and LZW. Coal mining in the DZW basin (the Nowa Ruda mine) was finally closed down in 2000 owing mainly to the problematic geological conditions, which made mining unprofitable.

The major brown coal mining areas are located in the Belchatów area in the vicinity of Piotrków Trybunalski, near Turów in the Bogatynia region, and at Konin in Patnów, Lubstów und Adamów. The geologically documented lignite resources in Poland amount to about 13 635 million tons, all of it considered suitable for power generation.

Brown coal extraction in 2004 totalled 61.1 million tons, from 61 mines, and was consumed entirely in power plants.

60.7% of power generated in Poland comes from hard coal power stations and 39.3% from brown coal in 104 boiler blocks. The average gross efficiency factor comes out at 37% (the figure for 1999).

Figure 3 shows the entire mix of power plant output and Figure 4 the changes over time in installed power capacity in plants with various types of power source. The two diagrams together indicate that the share of brown coal power plants in total power production (32%) is greater than their proportion of installed capacity (25.8%). Selected data characteristic of electric power production in Poland are shown in Table 2.

The share of renewable energy source power (RES) in a sector dominated by coal is relatively small, amounting to 2500 to 2700 GWh (about 1.6 to 2%), but has already expanded into an interesting market. Legal and contractual bases have been established, overcoming the initial barriers and paving the way for accelerated development of the most important inland renewable energy sources – hydro-power, wind, and biomass. Several strategies and regulations on RES usage have been established on the basis of the Energy Law of 1997, of which the main function was to bring the Polish energy sector into line with EU principles. The most important imperative of the RES promotional effort is the ‘quota obligation’ of 2000. It compels the power supply companies to purchase a fixed quota of electrical power from RES, not differentiating between the various RES options. It is anticipated that the share of RES in power consumption will rise from 2.65% in 2003 to 7.5% in 2010 (Figure 6).

Wind The three biggest Polish wind power plants, Barzkowice, Cisowo and Wolin, currently deliver 53 MW. Two more units, Tymien (50 MW) and Puck (22 MW) are to be put into operation very soon. Production of up to 300 MW from wind power by 2010 is envisaged.

Large areas of Poland, primarily those on the Baltic coast, offer advantageous wind conditions and are therefore interesting for wind power generation. In 2003, approximately 140 GWh were produced from the existing capacity. But current assessments suggest that there are now wind projects totalling 1600 MW in preliminary planning. Optimistic estimates of the total potential lie in the area of 4000 MW (10 TWh/y) a figure that owing to transmission grid restrictions should be read as a more realistic 2500 MW (6.2 TWh/y).

Biomass The bio-mass potential is considered to be very great, around 150 TWh/y. Its sources range from wood and straw for combustion, cattle manure for biogas applications, and gas from sewage-treatment plants and waste dumps. Some 310 GWh was extracted in 2002 from biomass, including 250 GWh in CHP plants in the pulp and paper industry, 38 GWh in biogas/sewage treatment plants, and 22 GWh from landfill gas. The main potential for its application consists of CHP projects or co-combustion of biomass in coal power plants developed by industry and by communities.

The biomass for co-combustion consists mainly of wood waste from forest management in the national forests [Grela, I: Co-combustion of biomass at Polaniec power plant, VGB PowerTech, April 2006], and is a sector that has already shown some interesting growth [Kranels, Wiese, Leschinsky, Potential of renewable energy in Poland, VGB PowerTech, April 2006] (Figure 6). Forest waste, sawdust, wood chips from sawmills and fuel from wood plantations are co-combusted with hard coal. The three plants described in Table 3 are good examples.

Pollution caused by emissions of solid and gaseous contaminants from fossil fuel combustion in Polish power plants and CHPPs is considerable (Figure 7), with CO2 emissions standing at 75.8% of the total.

This is a major problem, as Poland signed the Kyoto Protocol and is therefore obligated to reduce emissions by 6% in the period 2008 to 2012, compared to the 1988 level. This implies a reduction from 160 m tons in 1988 to 150 m tons in 2012. The necessity for minimising the negative effect of power plants on the environment arises also from the EU accession protocol and EU directives.

The total emissions of contaminants from power plants has fallen considerably from 1989 levels. SO2 emission decreased by 65% (Figure 8). With the increased demand for electric power and the EU obligation in mind, the ministry of Economy prepared an ‘Environmental Protection Programme for the Power Industry’, which was approved by the Council of Ministers in 2006 and by a national referendum.

The main goals of that programme are:

• Cost reduction in production, transmission and distribution of electric power by increasing the efficiency of the power supply companies, the market economy mechanisms, and effective operation of the grid.

• Increase of the safety of power sources and the reliability of power supplies to the final consumer by the creation of solid organisational structures in the supply companies.

• Balanced development of the economy, in concert with the EU accession protocol and the EU directives, and the development of alternative power sources.

These aims are to be achieved by competition in the power market, by establishing strong companies able to stand up to international competition, and by instituting clear legal rules.

The priorities in the development of Polish power policy, with clearly defined intermediate tasks for the next 20 years, are contained in the document Polish Power Policy to 2025, which was approved by Poland’s Council of Ministers in September 2005.

The documents that control CO2 emissions by decree of the Council are very important for the strategic development of power companies. They include the regulation of 27 December 2005 on permitted CO2 emission in the period 2005 – 2007 and the list of installations which are excluded from regulations on the CO2 emission (for the time 1 January 2005 to 31 December 2007).

The total of emission permits of CO2 for the period 2005 – 2007 amounts to 717.3 million tons CO2/year, from all combustion plants. Excluding the combustion plants for dangerous and communal waste reduces that quota to 597.324 million tons CO2/year. One should also keep in mind that monitoring, reporting, and verification of emissions causes additional costs. Generating energy from renewable sources is also foreseen in the long term. The EU plans to increase the share of RES in the energy balance of EU countries from 9% now to 12 % in 2012. The level of obligatory purchase of power from RES is at present 3.6%.

Following the political changes of 1989, power demand in Poland decreased considerably, leading to a steady increase in the average age of conventional power plants. Assuming a 40 year lifetime of such plants, power generation in Poland would fall 12 to 15 GW by 2020 from its 2005 level. To make up that loss, new power generation facilities are to be installed in the existing power plants. At present, there are three supercritical blocks under construction, namely Patnów, 460 MWe, Lagisza, 460 MWe, and Belchatów, 830 MWe. Lagisza coal fired supercritical plant has the biggest circulating fluidised bed boiler in the world.

Fossil fuels, especially hard coal and brown coal, will, in all rational scenarios, remain the central pillars of power supply in Poland. In the new construction programme nuclear power plants are also envisaged. Other technologies under consideration which could be applied in the next 10 to 20 years include steam plants with live steam temperatures of 650–700ºC and pressures of 30 MPa achieving a net efficiency factor of over 50%, CHP plants with integrated coal gasification, efficiency around 50%, and CHP plants with pressurised fluid bed systems achieving an efficiency of over 50%.

The Polish power market has first to be consolidated and then privatised. Bearing in mind the various primary energy options available, it is important to the achievement of an economic, environmentally responsible and dependable power supply system in Poland that all its aspects are assessed accurately.