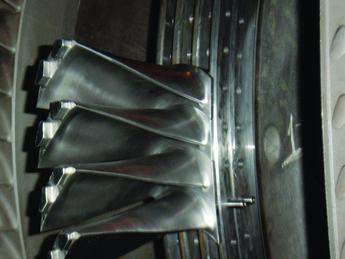 Nuclear Power Corporation of India Ltd (NPCIL) is one of the largest power-generating utilities in India, with a total installed capacity close to 2700 MW. Several of its units are equipped with turbine-generators of Alstom Rugby design and supplied by Bharat Heavy Chemicals Ltd, BHEL.

A turbine in NPC’s Madras Atomic Power Station (MAPS) had suffered severe cracking of the HP rotor 4th stage disc. The HP rotor is a NiCrMoV steel forging having five stages. Owing to cracks in a number of blades and on the disc, the 4th stage had been debladed and the cracked portion of the disc machined off. The rotor had been returned to service (with pressure plates) and subsequently taken out of service when spare rotors were ready. At the same plant there are three other rotors of a similar type on which the 4th stage disc diameter has been modified to alleviate the problem, involving a reduction of around 40 mm. They have operated for periods ranging from 8 000 hours to 25 000 hours.

Alstom India, with technical backup from its UK (Rugby) facility, approached NPCIL to repair the damaged rotor and restore its operational life. The order was awarded in December 2002.

Scope of the contract included further cutting away of the HP rotor 4th stage disc, weld build-up to the required diameter, post weld heat-treatment and non-destructive testing, machining of the disc to a modified root design consistent with Alstom Rugby’s design (to reduce stress levels in the disc) supply of modified blades, assembly of blades and shrouds, machining of shrouds, balancing at 3000 rpm and over-speed test at 3600 rpm. It was envisaged that at critical phases of the work visits by a metallurgist from Alstom Rugby would be necessary.

Utmost care was taken at every step of the repair, since even the smallest error could result in rejection of the disc and involve major rework. The main challenge was to train the welders to the required skill levels for this kind of weld repair, an investment that was one of the key factors in helping to produce the excellent quality of the weld.

Another challenge was making the necessary modifications to the SAW (submerged arc welding) machine at the Baroda works in India to render it suitable for the disc build-up operation. Mock-up trials, and a visit by Rugby’s metallurgist, were required before the contractors were absolutely assured that it would deliver a perfect weld quality.

Setting up the weld parameters was achieved by trials on the dummy shaft. The weld material feed had to be synchronised very accurately with the rotational speed of the rotor to ensure even and defect-free deposits. A special dummy shaft, simulating the rotor disc and its available access points, was fabricated to test the setup. Rotor speed control devices were modified and adjusted to achieve precise control.

Disc machining on the MFD lathe was carried out according to engineering specifications determined by Alstom in the UK.

First of its kind

Although this was the first time such a weld repair of a turbine rotor had been carried out in India, the repair work was a complete success – the contractor achieved a high quality of weld on a par with what had been achieved by Alstom in the UK. There were zero defects, and no rework.

Every phase of the work was performed under strict quality control and under the scrutiny of NPCIL. Although this was the first time machining of a repaired disc had been carried out in the Baroda works, the work was performed with the same degree of control of dimensions and surface finish as are applicable to new rotors.

After re-building of its 4th stage the rotor was dispatched to NPC’s Kakrapar atomic power station, as an ‘as new’ spare rotor. It is scheduled to be put into service during the next planned outage.

Refurbishment by welding is a popular method of achieving life extension of steam turbine components. Weld repair technology finds widespread application in the reconditioning of diaphragms, and in LP blades for repairing erosion and mechanical damage and the restoration of blade tenons.

The weld repair of steam turbine rotors is an established method of returning a rotor to a fully operational condition in a time period much shorter than normally required for the procurement of a new rotor. Also, the total cost involved is normally less than that of purchasing a new rotor.

The goal of weld repair is to ensure structural integrity, and reliable and safe operation of the reconditioned rotor. There have not so far been any reports of weld failure in the rotors that have been weld rebuilt and returned to service by Alstom.

The development of rotor welding technology by Alstom goes back four decades to a time when the forging technology available could not deliver high quality large monobloc rotors. The manufacture of large rotors by the welding together of smaller forgings was developed as one solution.

Alstom has had considerable experience in the UK of the weld repair technique described here. Repair of the MAPS HP rotor has benefited from this, in particular by gaining access to a full engineering assessment that can define the minimum requirements necessary to guaranteeing a high integrity repair. These are reflected in weld design and post weld heat treatment procedures. The main considerations are as follows.

1.The rotor material/weld metal/flux combination should be selected to optimise the mechanical properties and strength of the rotor, in line with engineering requirements.

2. The correct selection of the materials and heat treatment should be such that stresses induced in the refurbished portion of the rotor are acceptable.

3. The weld metal chosen should minimise exposure of the rotor to further damage from environmental causes such as stress corrosion.

In this case the rotor disc root geometry was changed during the repair from straddle root to finger-root design to ensure lower levels of stress in the load bearing areas of the root, thereby promoting reliability in terms of strength and vibration characteristics.

Execution of the repair

Subjecting the disc to ultrasonic and magnetic particle examinations