All systems go for Sedi-filter 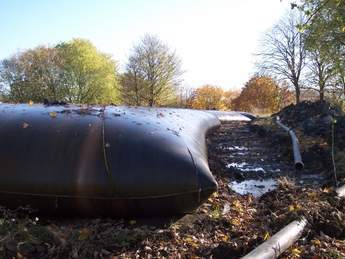 An environmentally-friendly dewatering system is being launched after a successful pilot project which helped to keep Britain’s canal network open to traffic. The Sedi-filter system has been created as a complete solution to dewatering engineering projects. Designed by environmental waste management firm Aardvark EM, the system is manufactured by DRM Industrial Fabrics, which specialises in performance filtration through design. Its creators believe the system will be of great benefit to dam and hydro power plant operations involved in silt extraction projects and the creation, stabilisation and restoration of watercourses.

Sedi-filters have been designed to dewater large volumes of water-based slurries generated from maintenance operations on lakes and waterways and from industrial processes. They can also be used to create artificial weirs, berms and reefs in watercourses, and for erosion control in the marine environment.

Mark Clayton, managing director of Aardvark, has been heavily involved in the development of Sedi-filter. “Sedi-filter is of great help in terms of extracting silt as well as playing a key role in stabilising watercourses by using filled dewatering bags in the water to help stabilise banks,” he says. “There is really no limit when it comes to the depth of water Sedi-filter can work in. We are looking at a project in the Thames Estuary, near Canary Wharf, where they would operate at a depth of 8m with no problems.”

Sedi-filters have already provided Midlands-based Blue Boar Contracts – which has a national contract with British Waterways to dredge canals to a navigable depth – with an environmentally-friendly solution to the problem of containing and dewatering sediment in confined areas and holding and treating contaminated sediment.

In a pilot project, the company used Sedi-filter’s bespoke dewatering bags to contain and dewater sediment taken from a 3km stretch of the Birmingham and Worcester Canal in the heart of Birmingham city. After successful results during the three-month pilot project, the company is now using Sedi-filter’s dewatering system to deal with most of its contaminated sediment.

The dewatering system has a strong environmental benefit and can be effective in a wide variety of dewatering and engineering applications. The main gain is the removal of water from sediment, transforming it into a drier state, which helps handling and enables the sediment to be disposed of to landfill or used elsewhere.

Blue Boar director Simon Potter is impressed with the way the system has helped his company’s work: “The use of the Sedi-filter system means that we don’t have to add anything to the contaminated sediment to treat it before it is disposed of. That means we don’t have to have a special licence to deal with the waste and we are not increasing the weight of the sludge. We can dry it out using the Sedi-filter system, so it can be accepted to landfill and, because the water is extracted, we are actually reducing the amount we are taking away. This means lower transport costs and less weight at the landfill weighbridge.”

Sedi-filter dewatering systems have been created to tackle the environmental problems associated with excavating and storing wet slurry, sludges and sediments.

Made from high-quality geotextiles, Sedi-filter is designed to effectively capture solid materials without the use of excessive or specialist machinery. It removes excess water from wet wastes, such as sludges, dredged silts and washwaters, through a passive filtration process. Solids are held within the tube, as the water passes through the fabric and flows back to its original source, surrounding ground or another collection point. The result is a significant reduction in the volume of solid waste that has to be handled and dealt with – as up to 90% of the water is removed.

If the solid waste is contaminated, like the canal sediment, then the wet material can be placed in the Sedi-filter and the water extracted. The Sedi-filter can be used to contain contaminated sediment whilst treatment is applied, as dewatering itself does not decontaminate sediment.

The bag is made of a close weave textile, which aids the dewatering process. The filters are engineered to withstand pressure at the base, which allows for stacking. They can be made to almost any size depending on application. The standard size is 7m wide x 33m long – with a volume of approximately 250m3.

Filling is via pumping, the dorsal openings at the top centre of the bag combine an entry port and sleeve, this allows a pipe to be inserted and clamped inside the sleeve. Filling is controlled through a manifold/valve system, each tube is filled and allowed to dewater. Once dewatered, the Sedi-filter is filled again and the process is repeated, until the dewatered sediment volume is approximately 80%.

A wide variety of treatments can be applied to the slurry during and after pumping. Air lines can be run through and clamped in place and microbes added, as well as mixing and agitation.