All on the line – oil and gas exploration in east Africa

The promise unearthed by oil and gas exploration in east Africa bodes well for the region’s economic future but, as GlobalData’s expert industry insight reveals, there are still some key hurdles that need to be overcome, not least in terms of pipeline development. 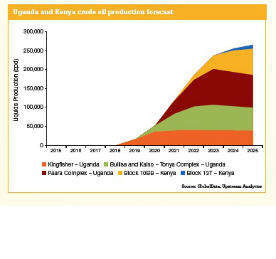 Oil and gas exploration in the East African Rift System has been gaining momentum since 2000, with an upturn in the number of wells drilled and licences acquired, primarily driven by mid-sized independents and national oil companies.

The first major discoveries were made in the Lake Albert area of Uganda by Tullow Oil in 2006; since then, recoverable reserve estimates have risen to approximately 750mmbbl in Uganda and 600mmbbl in Kenya. With the government share of the reserves expected to be 30-50%, the potential effect on economic development in these countries could be huge.

However, to enable commercialisation of these discoveries, new infrastructure, including an export pipeline, is required. A range of possible pipeline routes to ports in Lamu, Mombasa or Tanga have been proposed, but upstream development in the region has stalled due to a lack of progress in developing an export route for these inland discoveries.

Operators have been lobbying for an export pipeline since the discoveries were made to enable development of the area. Tullow Oil and Africa Oil have cautiously welcomed progress made in agreeing a route from Uganda through northern Kenya to Lamu. They intend to submit the draft field development plans for their upstream projects in Kenya by early 2016, aiming to achieve project sanction of the export pipeline and upstream developments by the first half of 2017.

Maersk’s recent farm-in agreement, for 50% of Africa Oil’s interest, will support these projects’ move towards sanction. While Tullow Oil would benefit from the northern route through Uganda and Kenya, as it holds interests in significant discoveries in both countries, Total prefers routes further south, citing security concerns in northern Kenya.

Separate pipeline projects for Uganda and Kenya are a possibility, but this would be more expensive than a combined project. Separate developments could, however, result in reduced security risk for oil exports from Uganda and lower export tariffs for companies with interests only in Uganda, such as Total.

Tullow Oil and Africa Oil spent approximately $200 million on continued appraisal drilling throughout 2015 in Kenya, but Kingfisher, operated by CNOOC, was the first field to receive development approval in the region, which it received from Uganda’s Energy Ministry. Preliminary work has started at Kingfisher, but the final investment decision has been delayed until the other projects are approved, as a collaborative development effort is sought to maximise profitability.

Separate developments could result in reduced security risk for oil exports from Uganda and lower export tariffs for companies with interests only in Uganda, such as Total.

CNOOC will also be hoping for quick progress on the pipeline decision, with Kingfisher expected to be ready for production by 2019. Some production from the field will be reserved for the local market in the form of a planned 60,000bpd-capacity refinery in Hoima, with 30,000bpd anticipated by 2019 and the rest by 2022.

Overall oil production in Uganda is forecast to peak at about 200,000bpd by 2023. In Kenya, production is estimated to reach approximately 85,000bpd by 2027, provided the export pipeline is in place.

The onshore blocks in east Africa have relatively low exploration and appraisal costs compared with the deepwater-dominated exploration in west Africa. Total capital expenditure on upstream projects over the next ten years is forecast at about $7 billion in Uganda and $3 billion in Kenya. Estimated full-cycle capital expenditure for these developments is around $8-12/bbl and the remaining break-even oil price is $40-70/bbl. This is increasingly enticing as the oil and gas industry cuts back on capital expenditure, with mid-sized companies such as Maersk looking for more cost-effective opportunities.

In August 2015, an agreement was struck between the Kenyan and Ugandan presidents on a 1,500km pipeline. The proposed route starts at Hoima in Uganda, passing through Lokichar on the way to Lamu in Kenya. The building of a reverse-flow pipeline to deliver petroleum products – extending Kenya’s multiproduct pipeline between Mombasa and Nairobi, which is currently in the last stages of construction – was also agreed.

However, in October 2015, Uganda signed a separate agreement with Tanzania to conduct a feasibility study for a competing route through southern Uganda and northern Tanzania to Tanga. Kenya has indicated that it could move ahead with its section of the pipeline regardless of Uganda’s involvement as part of a wider infrastructure project through the northern part of the country.

Feasibility studies for the agreed Uganda-Kenya pipeline design were conducted by Toyota Tsusho. The study indicated that a route from Hoima through Eldoret in Kenya to Mombasa would be approximately $500 million more expensive than a route through Lokichar to Lamu, due to the terrain.

The primary concern with the Hoima-Lokichar-Lamu route is the stability of northern Kenya – with Islamic militants and local bandits posing a threat to the safety of the pipeline – as well as other environmental and social issues. Kenya is expected to provide financing and security guarantees before any binding agreements are signed. The feasibility study for the Uganda-Tanzania route will be carried out by Total in order to identify the least expensive and most secure option for exporting oil from Uganda.

Initial cost estimates for the northern route through Kenya are $4-5 billion, with a construction period of three to four years and a capacity of 300,000bpd. The pipeline will be heated to above 40°C to prevent the produced crude oil solidifying due to its waxy properties, making it the world’s longest heated pipeline. Possible tariff fees are estimated at $9-15/bbl, with the intention that fees will be lower or equivalent to other routes. Implementing an economical solution is as important as the speed of development because 50-60% of the operational expenditure for the upstream projects is expected to come from export tariffs.

Development of an export pipeline would also be a driver for upstream exploration in the region. Some blocks have already been licensed by governments in central and eastern Africa, but the remote locations have dampened interest from major oil companies. South Sudan and Ethiopia have expressed an interest in future extensions to a pipeline route through northern Uganda and Kenya, while Tanzania is looking to revitalise its onshore exploration blocks in the north and west of the country. Rwanda and the Democratic Republic of the

Congo also have blocks bordering Uganda that could generate interest if an export route were available. Current licence holders view new-basin exploration as an area with high growth potential. Discoveries in these countries have favourable subsurface characteristics and are above the volume threshold necessary for commercial development; however, without an economical export route, the inland discoveries will remain commercially unviable at today’s prices.