How much grid energy storage do we need to smooth out the fluctuations inherent in weather dependent renewables and how much will it cost? Back of envelope calculations suggest some very large numbers, says Euan Mearns, senior researcher, Chair of Entrepreneurial Risks, ETH Zurich 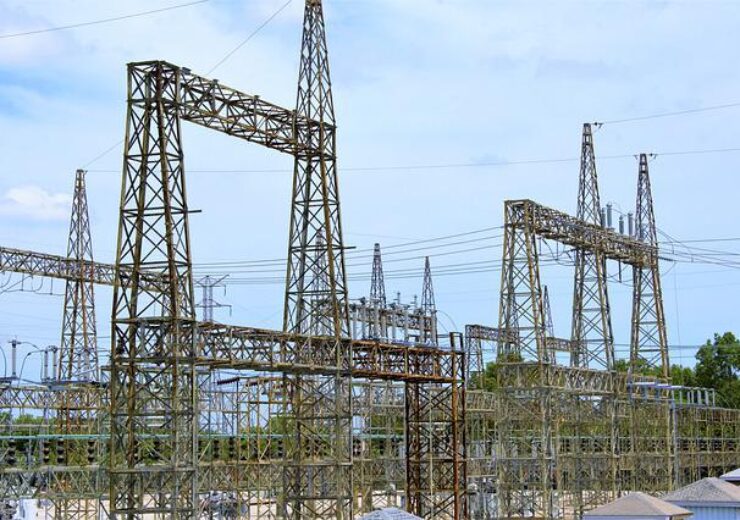 The Energy Transition, which should actually be called an “energy replacement”, is a first in human history, and, to a large extent is a west European venture. It is underpinned by wind and solar PV power.

The intermittent supply from these sources is widely recognised as the main barrier to achieving high levels of zero carbon renewables penetration. Mitigating strategies often include:

The only known, self-contained and secure means of converting variable renewables to dispatchable, load following or base load supply is via the energy storage route. Current commercially available “grid scale” storage options include pumped hydro storage and batteries. Among future technologies, green hydrogen is currently seen as the front-runner.

Only pumped hydro storage (PHS) is deployed at scale today, with numerous schemes allowing specifications, performance and costs to be meaningfully assessed.

To analyse the feasibility of storage options, it is necessary to have a good understanding of the following variables:

This article will provide summary figures on efficiencies and costs but will then focus on pan-European wind in order to illustrate the scale and capital cost of the storage challenge using existing and planned PHS schemes to provide some framework numbers.

The energy efficiency of storage options

There is no such thing as a free lunch in the energy world and if you want to store electrical energy, and to then return it to the grid, energy is lost in the process (round trip efficiency). The following are round trip efficiency estimates for the three storage technologies mentioned above:

In short, both PHS and Li-ion batteries are reasonably energy efficient. Green hydrogen is the black sheep with very low round trip efficiency, where heat is lost in the electrolysers and in the combined cycle gas turbine (CCGT) plant.

The capital cost of storage media

Costs can be estimated for PHS and Li-ion batteries, both of which are in commercial operation. The absence of commercial green hydrogen projects makes reliable cost estimates for that technology impossible.

PHS is by far the most widely deployed grid-scale energy storage technology in the world today. Global generation capacity is estimated to be 181 GW with a storage capacity of 1.6 TWh. If the global installed PHS were switched on at capacity it would drain all reservoirs in 8.8 hours. Most PHS built to date has been used in tandem with base load nuclear power where night-time surplus is stored and released into daytime peak demand and price. A natural diurnal price arbitrage finances the whole operation where storage is filled and emptied on a daily basis.

We use the planned Coire Glas PHS scheme in Scotland and the recently completed Nant De Drance scheme in Switzerland as cost examples:

The revised Coire Glas scheme (involving an increase in generating capacity but not storage capacity) has an estimated price tag of > £1 billion working out at £33.3/kWh CAPEX storage capacity (US$43.7/kWh).

Nant de Drance (upgrade of an existing scheme) cost CHF 1.9 billion to build, working out at CHF80.9/kWh CAPEX for the storage capacity (US$87.4/kWh).

The high capacity cost of Nant de Drance relative to Coire Glas could reflect higher overall costs in Switzerland but will also reflect design differences. Coire Glas uses a natural lake as the lower reservoir. This saves a lot in construction costs but imposes environmental restrictions on the volumes of water pumped from and released into the natural hydrological system. Nant de Drance is a closed loop system, with an artificial lower reservoir that has to be built, adding significantly to cost.

Tesla is one of the market leaders in Li-ion domestic and industrial scale battery storage and we therefore use their products and prices as a guide:

In static storage systems, Tesla use Panasonic Li-ion NMC battery cells, where N = nickel, M = manganese and C = cobalt. Of those elements, cobalt is the most contentious with the Democratic Republic of Congo accounting for 67% of global production in 2020, with a poor environmental and human rights record.

We have not found grid-scale data on demonstration projects for this front-running technology upon which to base realistic cost estimates.

Scalability and low environmental impacts are potential strengths of this technology option. The main limitation lies in the very low energy efficiency, as already noted, grounded in the thermodynamics, and therefore difficult to overcome.

To be profitable, under normal economic conditions, the cost of wholesale electricity used in electrolysis would have to be less than one third of the retail price of electricity sold to the consumer.

It is often claimed that the wind is always blowing somewhere, which is undoubtedly true. In reality, continental Europe is periodically subject to pan-European lulls (flat calm everywhere) when large areas of high pressure are centred over western Europe, and in periods such as this, storage would be required to keep the lights on. By way of example, September-October 2015 was characterised by several pan-European lulls, as revealed by high-resolution analysis of wind data from Sweden, Denmark, UK, France, Germany and Spain. This provides comprehensive geographic cover of Europe. 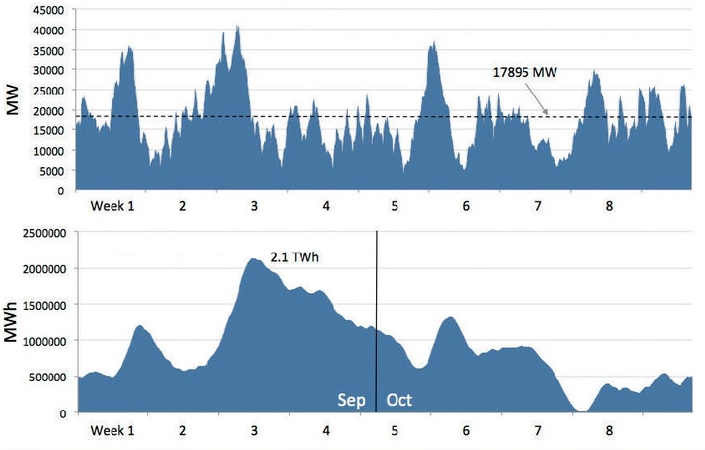 Figure 1, top, shows the stack of wind output from these six countries over the period September-October 2015, with maximum output of 40 GW at the beginning of week 3, punctuated by several lulls where the Europe-wide wind output fell to 5 GW.

The corresponding storage requirement (see simulation, Figure 1, bottom) is calculated using the mean production over the two-month period (17.9 GW) as the basis. All production above this value is sent to storage, while the voids below this value are filled using storage withdrawal. Effectively, the peaks would fill the troughs, resulting in a uniform 17.9 GW base load output.

The opening storage level was adjusted to ~ 500 GWh to ensure that storage does not run empty. At the end of the two-month period, storage returns to this opening value as a consequence of the arithmetic.

This simple exercise provides a ballpark figure of 2.1 TWh storage required over this wind-volatile period. As wind capacity grows, the storage call will grow in rough proportion. Note that no deduction is made for efficiency losses (on the pumping and generation side). These would reduce the storage required by 18% to 1.7 TWh while wasting 18% of the wind energy supplied and reducing the energy available for consumption.

Is 2.1 TWh of storage feasible in Europe?

We now provide back of envelope calculations to put some numbers on the cost and environmental considerations of PHS required to provide 2.1 TWh of storage.

Using the Coire Glas model would require 70 such schemes (2.1 TWh ÷ 30 GWh = 70) at a capital cost of £70 billion (£1 billion per scheme, US$92 billion). This would provide 70 x 1500 MW = 105 GW pumping and production capacity. The maximum capacity required, as deduced from Figure 1 (top), is about 22 GW, suggesting that scaling up the Coire Glas option would result in about 5 times the required generating capacity and would therefore operate well below this generating capacity for most of the time.

At this point it is worth contemplating the design specifications of existing and planned PHS schemes. In simple terms, schemes to store variable renewables require high storage volume and less power output to maximise the duration for which they can operate. On the other hand, profitability is determined by rate of turnover, where maximising power input and output is imperative.

It should be noted that the revised proposal for Coire Glas increases maximum power from 600 to 1500 MW (without increasing storage capacity, as already mentioned). A proposal to increase capacity at the Cruachan PHS scheme, also in Scotland, increases power from 440 to 1040 MW. Recent expansion of the Nant de Drance PHS facility increases power at the expense of the storage/power ratio.

Is it feasible to build 70 Coire Glas or 89 Nant de Drance schemes in Europe? This question is most easily answered for Nant de Drance. In Switzerland there is great public opposition to further large hydro development in the Alps. It is, therefore, quite unlikely that one further scheme like this may be built let alone 89 of them.

Europeans value the scenic, recreational and tourist value of their mountain areas. This alone is likely to present a formidable barrier to further expansion of pumped hydro storage on the scale required to provide meaningful grid-scale storage for variable renewables.

The Scottish model for pumped hydro storage development involves using natural lakes as the lower reservoir, as in the existing Foyers and Cruachan and planned Coire Glas schemes. This presents one further environmental restriction in that pumping lowers and generating raises lake levels, which eventually impacts river outflow rates. The large cost saving of only building one dam is offset by strict operational limits.

And what about Li-ion batteries, which are enjoying increasing market penetration? In 2017, at Hornsdale, SE Australia, Tesla built what was at the time the largest Li-ion battery in the world. The initial scheme was rated at 100 MW with 129 MWh of storage and cost A$90 million (US$68 million). This works out at US$527/kWh. To provide 2.1 TWh of storage would require 16 279 Hornsdale-scale batteries, costing a notional US$ 1.1 trillion at 2017 prices.

However, the cost of large-scale battery storage, like Hornsdale (which has been recently expanded), has already fallen to about US$300/kWh and the price tag today may be about half that in 2017. Future battery costs may depend very much upon the cost of metals and of fossil fuels used in mining.

All the numbers quoted above are for actual wind generation for six European countries in 2015. In 2015, these six countries had 103 GW of installed wind capacity while 20 European countries, reported by BP, had 146 GW installed capacity. Adjusting wind capacity figures to “all Europe” and projecting capacity growth to 2050 suggests that all storage figures presented above may have to be increased by a factor of ~10. This seems neither physically feasible, environmentally desirable nor affordable. Is current energy policy predicated upon an impossible dream?