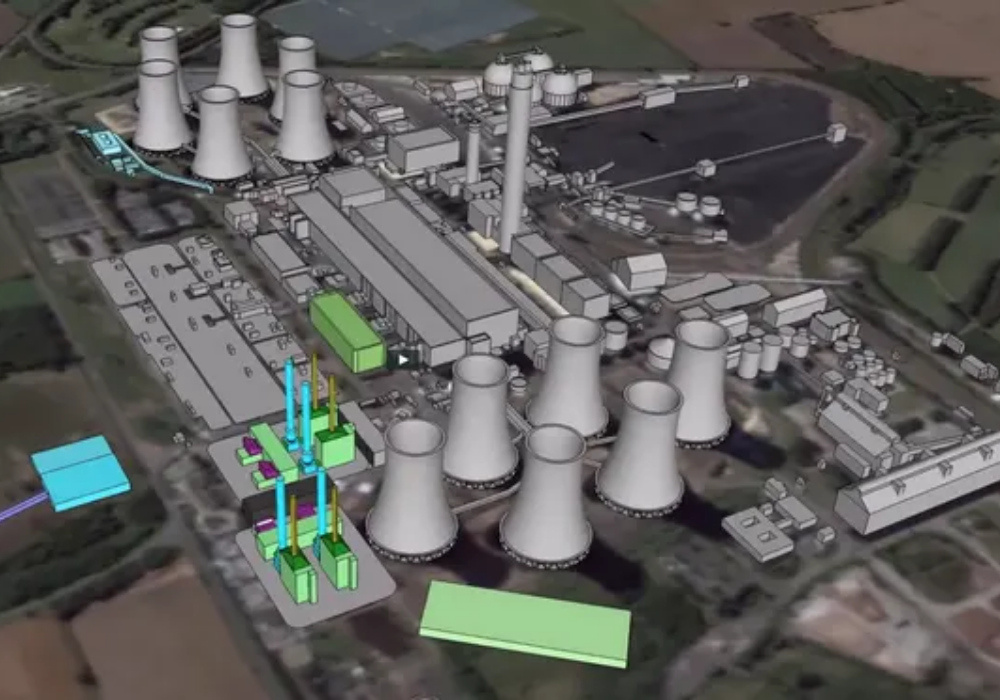 The proposed plant, based next to an existing facility in Selby, North Yorkshire, was given the go-ahead in October 2019 (Credit: Drax)

Drax’s gas-fired power plant was set to be the largest of its kind in Europe – but doubts now surround its future after plans were paused following a legal challenge by environmental campaigners.

The proposed plant, based next to an existing facility in Selby, North Yorkshire, was given the go-ahead in October last year.

It was a controversial decision as the UK government, in approving the project, overruled its own planning authority’s recommendation to reject it on climate grounds.

Environmental law charity ClientEarth today (30 January) issued a high court challenge on the decision to grant the 3.6-gigawatt (GW) plant – which it claims will produce up to 75% of Britain’s power sector’s emissions.

The judicial review is now expected to be heard in about two months’ time.

ClientEarth’s climate lawyer Sam Hunter Jones said: “In its planning application, Drax failed to explain how this emissions-intensive gas project squares with the UK’s carbon targets and its strategy for clean growth.

“And the government’s own energy forecasts show the UK does not need a major roll-out of new large-scale gas generation capacity.”

Here we look at the background to the project, why it’s caused so much controversy and what the future holds.

Despite laying out its intentions in 2017 to build a 3.6GW plant, it later admitted to only having initial plans for up to 1.8GW of combined cycle gas turbines – an efficient method of producing electricity from natural gas.

But the FTSE 250-listed power supplier reverted back to its original statement in 2018, when it submitted a planning application for the full 3.6GW station.

The project proposes replacing coal with gas and involves two 1,800-megawatt (MW) combined-cycle generating units, each of which will comprise of two 600MW gas turbines, a heat recovery steam generator, and a 600MW steam turbine.

A 3km-long gas pipeline will be built to connect with the existing national transmission system pipeline located to the east of the plant site.

But Drax has said it will only proceed with the new plant if it receives a favourable contract under a UK government subsidy auction that commissions power generators to ensure there is enough power throughout the winter months.

The company originally planned to enter an auction in March, with the hope of opening the plant in 2023, but it has since confirmed it will not proceed while the legal process is ongoing.

What has the government said about Drax’s proposed coal-fired power plant?

In June last year, former prime minister Theresa May bound by law a target of reaching net-zero emissions by 2050 as part of the UK’s bid to help clean up the economy.

The government has also imposed a phase-out on coal-fired plants by 2025, which ties in with Drax’s shift from the high-polluting fuel to gas.

The government has made it clear it believes natural gas can still provide a reliable source of energy while the country attempts to scale-up on renewables – with Drax claiming its new plant would be capable of having carbon capture technology fitted in the future.

Energy supply currently accounts for more than a fifth of Britain’s greenhouse gas emissions, which increases the pressure on power companies to deliver electricity from cleaner sources.

Business secretary Andrea Leadsom’s decision to grant permission for the new gas-fired plant came after the UK’s Planning Inspectorate told ministers the proposals would “undermine the government’s commitment, as set out in the Climate Change Act 2008, to cut greenhouse emissions” by having “significant adverse effects”.

In light of the environmental concerns surrounding the new plant, a Drax spokesman said the company’s ambition is to become carbon-negative by 2030.

He added: “We will do this by using ground-breaking bioenergy with carbon capture and storage technology (BECCS) to remove millions of tonnes of CO2 from the atmosphere each year, making a significant contribution to the UK’s climate targets.

“Drax’s carbon-negative ambition could be achieved with new, high-efficiency gas power capacity as part of our portfolio of flexible generating assets.

“Drax Power Station plays a vital role both as a major employer in the north and in producing the reliable, flexible renewable power millions of homes and businesses rely on.

“We are exploring a range of options using different, flexible technologies, including this high-efficiency gas project.

“It could support the continued decarbonisation of the energy system, helping the UK on its path to net zero by 2050, in line with the government’s policies.”

Why ClimateEarth has taken legal action against the UK government

In a statement on the charity’s website, ClimateEarth said the UK can’t afford to be locked into heavily-polluting gas power for decades to come.

It claims the government’s climate body, the Committee on Climate Change (CCC), has warned there should be no more gas on the UK grid by the mid-2030s without carbon capture and storage.

Addressing Drax’s admission that the plans fall in line with the UK’s phase-out on coal, the environmental lawyers said the government’s latest forecasts estimate Britain will need just 6GW of new gas generation up until 2035.

ClimateEarth believes that because it has already approved 15GW worth of large-scale gas plants, green-lighting this project would take total planned gas capacity to 18GW – three-times the forecast requirement.

The London-based group said its assessment on the plant’s environmental impact, supported by climate think-tank Sandbag, found the project could create 400% more CO2 than if it wasn’t built.

The charity’s lawyers are seeking to overturn the approval given to Drax, stating the combination of the project’s scale, emissions intensity, and operating life make it a “significant threat to the UK’s carbon targets”.

Jones said: “The secretary of state has ignored the recommendations of her own planning authority, and her decision is at odds with the government’s own climate change plans to decarbonise in a cost-effective manner.

“Only this month David Attenborough warned governments to take more action to tackle global heating, pointing to the Australian bushfires as proof humanity’s moment of crisis has come.

“With scientists also ringing the alarm bells for decades, we shouldn’t need to take the government to court over its decision to allow what would be Europe’s biggest gas plant.”

As well as the gas-fired plans, Drax has progressively switched to biomass from coal to comply with the government’s renewable obligation orders (ROO), which states suppliers must generate an increasing proportion of their electricity from green sources.

Co-firing coal and biomass at all six units of the power station started by using the feed mix of 95% coal and 5% biomass in 2003, while the direct injection facility to blow-crushed wood pellets from on-site mills into coal fuel lines was commissioned in 2005.

The first coal unit to be run purely on biomass was converted in 2013, with two further conversions taking place in 2014 and 2016. A fourth plant was switched to biomass in 2018.

Although coal is more cost-effective than most sources, it produces far more CO2 than any other fuel – particularly compared to biomass, which is often carbon-neutral as it comes from various sources of vegetation.

Drax currently produces about 75% of its electricity from wood pellets – a renewable, low-carbon option.

ExxonMobil to participate in carbon capture and storage project in Scotland