As part of a new US-China trade deal, Beijing agreed to import $52bn in energy products from the US in the next two years — but tariffs may prove a challenge 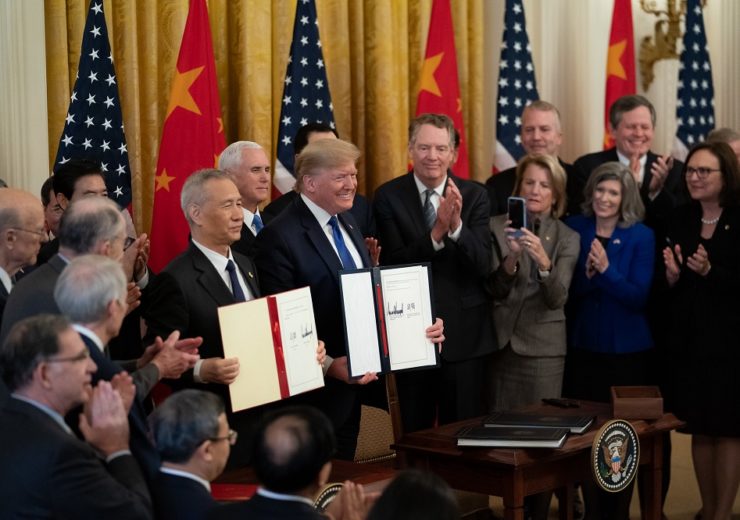 China will find it “challenging” to meet the oil and gas import commitments set out under its new trade deal with the US, as tariffs remain a key point of contention, according to analysts.

A substantial trade agreement was inked between the two nations in Washington yesterday, bringing a degree of relief to trade tensions that have sown uncertainty throughout global markets for the past 18 months.

Part of the agreement — the first phase of what is expected to be a revisited strategy — includes a significant increase in energy imports by China from the US over the next two years to the tune of up to $52.4bn.

He said: “From an energy perspective, what is most notable is China’s agreement to increase energy imports from the US by up to $52.4bn over the next two years as a part of a commitment to spend around $200bn more on US goods and services than it did in 2017.

“Let’s be clear, $52.4bn over two years is a lot of energy. But neither the 5% tariff on US crude oil nor the 25% tariff on US LNG is to be reduced or removed by China under the phase one deal.

“For China to massively increase imports of oil and LNG from the US while tariffs remain in place, is going to be challenging.”

Agreement between China and the US follows lengthy trade dispute

Washington and Beijing have engaged in tit-for-tat economic power plays over the past year and a half, resulting in tariffs being placed by both sides on imports of goods ranging from electronics, steel and agricultural produce.

The escalation of the trade war over this period has injected uncertainty and disruption throughout the international financial system, affecting investments, growth and planning in several key markets.

Energy industries have not been exempt from this, with US exporters squeezed by China’s oil and gas tariffs, introduced in retaliation to the US’ own levies on Chinese goods.

Thompson added: “In 2017, Chinese LNG imports from US were approximately 1.5 million tonnes worth around $600m.

“If China is to increase the value of US LNG imports considerably as a part of this agreement, let’s say to around 10 million tonnes in 2021, then the 25% tariff would need to be either absorbed by the importing company, or passed through to the consumer.

“We expect that Chinese national oil companies will be reluctant to commit to large-scale purchases given this.

“At the same time, the next two years will also see a slower pace of gas demand growth in China, rising domestic production, and the arrival of Russian pipeline gas, creating a more competitive gas market.”

In the US, industry officials have offered cautious optimism on the trade arrangement, with American Petroleum Institute president Mike Sommers labelling the deal “a positive step forward” that should create greater certainty across the domestic economy.

He added: “Although the US leads the world in energy development, trade wars disrupt global supply chains and create new barriers to US exports.

“De-escalation of trade tensions is welcome news to a wide range of industries, but there’s more work to be done.

“We encourage the administration to stay at the negotiating table until the US-China marketplace for energy trade is fully restored, and all remaining tariffs are lifted — including US tariffs on imports of industrial components used in our industry and Chinese retaliatory tariffs on US energy exports.”