Through a mixture of political pressure and new technologies, Chile is working to reduce the impact of lithium mining on communities and the environment. 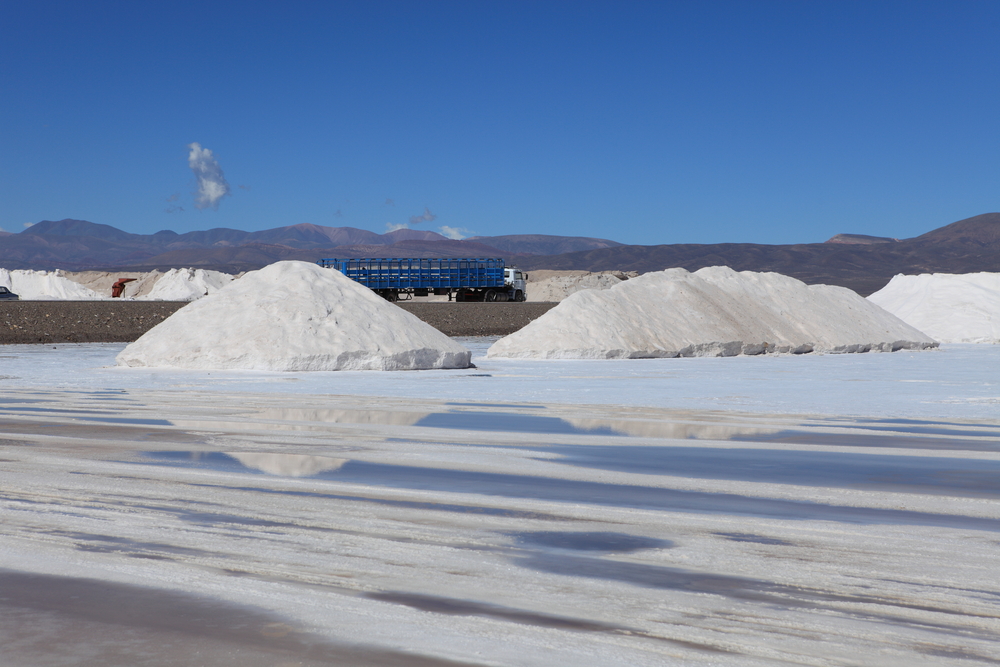 Lithium is the mineral of our century. Crucial to the batteries that power some of the world’s most basic – and exciting – technologies, it has the potential to revolutionise how we live and work. At any rate, it’s already made many people rich – including the Chilean exchequer. Yet South America’s lithium boom comes at a price. Using countless litres of precious water, the industry is hurting local people and destabilising one of the most delicate ecosystems on the planet. But there is hope. Through a combination of political pressure and new technology, Chile’s lithium mining industry is finally cleaning up its act. Andrea Valentino talks to experts across the country’s industry to find out more.

When they first arrived, back when Henry VIII ruled England and the Habsburgs ruled the world, Europeans were ruined by the Atacama. Expecting to find treasure – just like his predecessors against the Incas and Aztecs – Diego de Almagro instead nearly died there.

During the day, the conquistador and his soldiers shielded from 50°C temperatures by resting under the thin leaves of tamarugo trees. At night they walked, hoping to uncover El Dorado amid the sands. They were left disappointed.

When, in 1537, de Almagro and his men finally limped back to the Spanish colonial capital at Cusco, their clothes were supposedly so weatherbeaten that the explorers were referred to as ‘roto’ – torn. It’s a nickname Peruvians have used for their neighbours in Chile ever since.

How things have changed. Long a wasteland at the very tip of Chile, the Atacama now represents the centre of the country’s economy. The transformation can be summarised in a single word: lithium.

The desert, both in Chile and across the border in Bolivia and Argentina, contains 70% of the world’s supply. Without it our mobile phones, our laptops, our digital cameras and our Teslas would all be impossible.

Yet, if lithium is making Chile and its mining companies wildly wealthy – accounting for almost 10% of its GDP, nearly half of its exports and one-third of foreign direct investment – there is also a cost.

Native to the Atacama for centuries before de Almagro even knew Chile existed, the indigenous people of the desert have always relied on water to grow their crops and tend their livestock. But over recent decades, this precious resource has been disappearing – thanks in part to the very lithium that’s filled Chile’s coffers.

Along the way, it’s threatened ancient ways of life, dragged multinationals to court and even caused a lively constitutional debate. Not that the situation is hopeless: by investing in new technology and borrowing extraction methods from overseas, Chile could yet ensure its lithium industry works for everyone.

The impact of lithium extraction on the Atacama and its people

Fundamentally, Chile’s lithium problems can be understood geologically. The so-called white gold is typically found in saltwater brines, hidden under vast flats in the country’s far north. To access the lithium, mining companies first extract the brine with pumps, then direct it to large pools.

As the sun beats down on these pools over several months, the water evaporates. That leaves behind a mix of pure lithium and waste products – the latter removed via the magic of chemistry. Cheap and effective, this technique has helped the Atacama’s lithium industry explode. From just 20km² in 1997, the area being exploited has effectively quadrupled.

More to the point, says Dr David Whittle, a research fellow at Monash University, the industry is likely to become even more crucial. “Due to the rapidly increasing demand for lithium and its contribution to a low-carbon future, it is generally considered to have strategic importance,” Whittle explains.

All good news. Investigate the details, however, and difficulties soon appear. For one thing, that brine only contains 0.15% lithium – meaning mining companies have to extract vast amounts of water to make ends meet.

For another, 95% of the extracted water is lost to evaporation forever. In a region where it only rains about 15mm a year, and where some weather stations have never registered precipitation, it’s no wonder that many locals are profoundly uncomfortable about the industry’s success.

That’s doubly true, explains Dr Tim Werner, given the knock-on effects extraction can have on other water sources. “Surrounding communities will typically view these deposits as water resources,” says Werner, a research fellow at the University of Melbourne.

“When they are extracted, linked freshwater aquifers in surrounding areas are drawn down, making it more difficult for communities to access water for their own purposes.”

Nor is this just a hypothetical problem. Some Atacamans are already complaining about not being able to grow their staple peas and potatoes, or make money extracting salt, which also needs water. Even worse, there’s some evidence that Chile’s mining giants aren’t fulfilling their obligations to residents.

Though companies like Albemarle and SQM have invested in local communities, repairing schools and offering jobs, both have been accused of extracting more than their legal quota of salt water. Indeed, in 2019, a court upheld a complaint that SQM was over-extracting brine.

Certainly, the status quo is unsustainable. With one study calculating that 8,842L of brine is extracted from the Atacama’s dust every second – despite a ‘recharge capacity’ of just 6,810L – that’s quickly bound to leave a shortfall.

And though these numbers may sound precise, in practice it’s often hard to know exactly what impact lithium extraction is having on the Atacama and its people.

Jorge Cantallopts, director of research and public policy at the Chilean Copper Commission (Cochilco), says that “several hydrogeological parameters are currently used to measure the stability and brine use” but the problem is that much of the action happens on private land.

More to the point, mining companies are often shy about providing detailed statistics on their water consumption. Though academics like Tim Werner can use lithium production figures to take a stab at the numbers – bolstered by examining satellite photos of pond evaporation – he says that without detailed figures that’s always going to be a “guess at best”.

Change on the horizon for Chile’s lithium industry

The Chilean constitution has had a turbulent few decades. First introduced by the Pinochet dictatorship in 1980, it was mostly designed to ensure a perennial right-wing majority in the country’s parliament.

During the referendum campaign to ratify the document, opponents of the regime were banned from television – while the official electoral roll was burned and 3,000 secret police agents supposedly voted more than once, according to the country’s La Nacion newspaper.

No wonder, then, that since democracy was restored in 1990, Chile’s politicians have taken to reforming their most sacred document with gusto. Over the intervening 31 years, it’s been amended nearly 20 times, with tweaks covering everything from personal data to the status of Easter Island out in the Pacific.

Over the span of Chilean politics, in other words, the newest changes are part of a long and established tradition. Yet when it comes to lithium, they could utterly transform the industry’s position – and future path.

At the moment, all that precious brine is classified as a mineral. Though the government technically owns the brine, it gives private companies like Albemarle and SQM a licence to control their own lithium operations.

If, however, the brine was reclassified as water under the new constitution, it would drag power away from miners – and give it to the indigenous people of the Atacama.

All this is shadowed, says Werner, by voluntary regulations. “Momentum has been growing for impartial certification schemes that can guarantee responsible mining activities to international standards.”

Though constitutions and regulators can certainly improve things, it’d be better to attack the problem at source – and make lithium extraction cleaner. Fortunately, while politicians draft and mining executives fret, scientists are hard at work.

One of the most interesting initiatives involves the desalination of seawater. By using a metal-organic framework – imagine a type of complicated sponge – miners can extract lithium from the endless waters of the Pacific Ocean.

Though the technology is both expensive and in the early stages of development, Cantallopts and his team at Cochilco are “strongly” in favour of it. That’s bolstered, adds Whittle, by other innovations, including extracting brine without evaporation. This could one day allow brine to be put back into the earth once the lithium is safely away – or even using solvents to secure lithium before it ever leaves the ground.

At the same time, the industry is looking at more straightforward ways of going green. An obvious option is recycling, something that’s already happening far from the shores of the Atacama.

In Europe, for instance, officials have proposed recycling targets for lithium-ion batteries. On the other side of the world, Australia’s national science agency, CSIRO, recently suggested several ways to boost its own lithium recycling system. Among other things, this included better labelling and building more collection facilities. Similar initiatives are also being rolled out in the US, with a $175m lithium-ion battery hub set to be constructed in New York.

Certainly, none of these are bad ideas, yet experts warn that they can never hope to solve the industry’s broader problems alone. “In lithium-ion batteries, the amount of lithium is 2–3%, so there isn’t much cost advantage in recycling over direct mining,” warns Dr Mahdokht Shaibani, a colleague of Whittle’s at Monash University.

Even so, Shaibani adds that the number of end-of-life lithium batteries will “skyrocket” over the next decade – so governments, scientists and industry all need to work together to prepare decent recycling facilities.

Demand for lithium continues to grow

Where does all this leave Chile in the here and now? Whatever the human and environmental struggles, it’s hard to see the lithium boom slowing.

“We anticipate that we are going to keep rapidly expanding our lithium production industry and we also aim to develop a downstream industry with a focus on developing value-added products,” says Cantallopts. “We also have positive growth expectations for other countries in the region, especially Argentina, with several projects in hand.” Given the hunger for lithium in the global economy, that makes sense – not least in developing countries.

According to one recent study, China’s demand for the metal will triple by 2025. Across the Himalayas, India is proving just as vociferous, with the country expected to manufacture up to 40% of the world’s lithium-ion batteries by the middle of this decade.

Even so, the natives of the Atacama probably shouldn’t despair just yet. Prodded on by activists and legal action, after all, SQM has bolstered its membership of the IRMA with a number of other commitments.

For one thing, it’s promised to half brine extraction by 2030. For another, it’s investing billions of dollars in a lithium project in Australia. Rather than removing lithium from brine, this alternative method instead extracts it from spodumene, a type of mineral.

More to the point, Werner suggests that where SQM goes, other industry leaders will follow. “The behaviour of major producers in Chile, such as SQM, ought to help to raise the bar for all operators in South America.”

A fair point – for if Chile is finally cleaning up its act, it would be a tragedy for the desert landscapes of Bolivia and Argentina to remain roto in its stead.