The Barrambie vanadium-titanium project, located approximately 75km northwest of Sandstone in Western Australia, is one of the highest-grade titanium-vanadium hard-rock deposits in the world.

The property is owned by Neometals, a metals developer based in Perth, Australia, which has invested more than £16m ($21m) on the project since 2003.

Although a definitive feasibility study (DFS), completed in 2009, confirmed primary vanadium production from the conventional salt roast-leach process, the Barrambie project was temporarily suspended due to stagnant vanadium prices in the six years that followed.

Neometals revived interest in the project by completing a pre-feasibility study (PFS) on a hydrometallurgical process to produce titanium chemical (TiO2) from the Eastern Band ore body of the property in 2015.

Further, an updated DFS completed in March 2019 confirmed the economic viability of primary production of vanadium pentoxide (V2O5­) and ferrovanadium (FeV80) from vanadium-rich Central Bands of the mine.

Pilot-scale evaluation is underway to determine the process flow sheet to recover both vanadium and titanium from the entire deposit.

Details of the Chinese joint venture for Barrambie mine development

Neometals signed a memorandum of understanding (MoU) with the Institute of Multipurpose Utilization of Mineral Resources (IMUMR) of the Chinese Academy of Geological Sciences in October 2019 to develop the Barrambie vanadium-titanium mine through a 50:50 joint venture (JV).

The initial agreement is for the construction of a hydrometallurgical processing demonstration plant fully funded by IMUMR, subject to satisfactory results of on-going pilot studies.

The mineral concentrate from the Barrambie project is expected to be sent to IMUMR’s test work facilities in China in the first half of 2020.

If the demonstration trials are satisfactory, both the parties will jointly fund and evaluate an engineering cost study (ECS) before formalising the JV and proceeding with the final investment decision (FID).

Under the proposed JV agreement, Neometals will retain the sole ownership of the property, while having a 50% JV interest in a fixed quantity ore extraction right, as well as in the beneficiation plant and the integrated chemical business in China.

According to the updated DFS, the Barrambie vanadium project is forecasted to produce 9,235 tonnes (t) of FeV80 and 6,337t of V2O5 a year, with an average plant feed rate of 2.66 million tonnes per annum (Mtpa), over an estimated mine life of 15 years.

The initial capital investment in the project is estimated to be £374m ($484m).

The project site is situated on the mining lease M57/173 in the Eastern Murchison Goldfields, which was granted to Neometals through its wholly-owned subsidiary Australian Titanium.

The  Barrambie vanadium-titanium deposit lies within the Archean Barrambie Greenstone Belt, which is surrounded by gneiss and granitoids, in the northern Yilgarn Craton.

The mineralisation occurs in the form of bands of cumulate aggregations of martite-ilmenite in large diffused layers within the Barrambie Igneous Complex, which stretches over 25km with a width ranging between 500m and 1,700m.

The run-of-mine (ROM) ore will be fed into the ROM bin of the nearby processing facility through front-end loaders.

The ore processing method for the project will be finalised after the completion of on-going pilot test works.

The mine site will be accessed via the Meekatharra-Sandstone road, approximately 70km of which will be upgraded as part of the project.

Power needs are proposed to be met through a gas-fired power station comprising 14 generating units of 1.75MW capacity each, while two 1.65MW back-up diesel generators will be used for emergency power supply.

Water for the Barrambie operation will be supplied from a bore field located 20km away from the site, through a 450mm high-density polyethylene (HDPE) pipeline at a rate of 315m³/hr.

Natural gas is proposed to be supplied to the site through the new 181km-long Barrambie gas pipeline connecting the Goldfields Gas Pipeline (GFGP) near Wiluna.

An aerodrome capable of handling up to 4,500 return passenger flights a year and an accommodation village comprising 250 rooms and associated amenities are also planned to be developed as part of the project.

Adaman Resources and SMS Mining Services were engaged for mine infrastructure, mine contractor pricing, and mining cost modelling services. 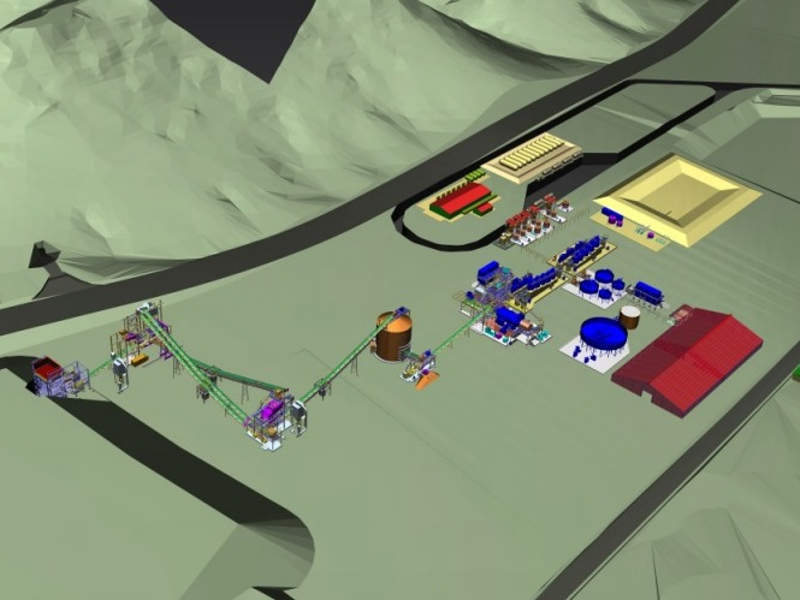