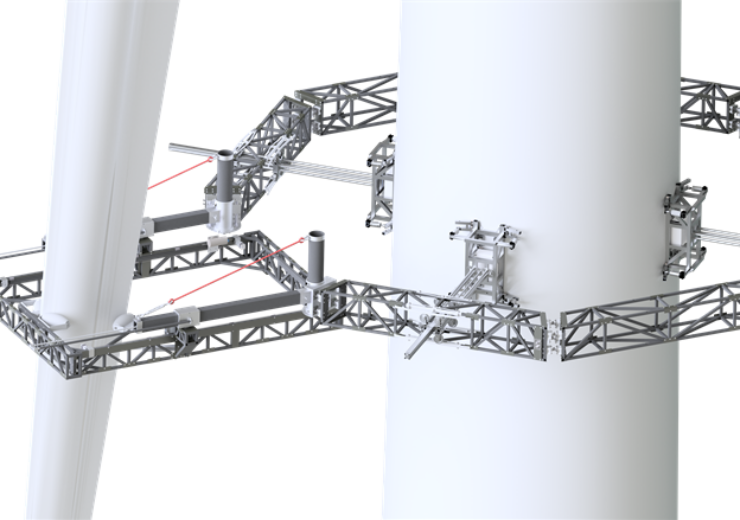 A section of the world-first RADBLAD system being developed for the renewable energy sector by a consortium of industrial and academic partners including Forth Engineering, Innvotek, TWI, ORE Catapult, Renewable Advice and London South Bank University. (Credit: Forth/Cision.)

As UK Prime Minister Boris Johnson has set out plans for offshore wind to power every home in the country by 2030, a British consortium is pioneering new technology to boost the industry.

A lightweight robot capable of carrying out an X-ray maintenance survey of wind turbines – offshore and onshore – is being developed to help the wind power industry operate more efficiently.

Forth Engineering, in Cumbria, together with a consortium of industrial and academic partners – Innvotek, TWI, ORE Catapult, Renewable Advice and London South Bank University – are developing the RADBLAD technology.

RADBLAD will complete a full X-ray survey of a Vestas V47 size turbine and all its blades in just a few hours.

The businesses and organisations involved have a wide range of expertise in robotic development and manufacture, radiography development, and AI algorithm software development.

The innovation is in line with the UK government’s policy of increasing renewable power to bring all greenhouse gas emissions to net zero by 2050.

There has already been a significant growth in installed wind power capacity within the last decade, especially in offshore wind power in the UK which is the world’s sixth largest producer of wind power.

This growth has also meant a higher level of maintenance required across the industry with more wind turbines and more blades needing to be checked for faults.

At the moment one of the ways surveys are carried out is manually by maintenance engineers climbing the wind turbine and its blades with rope access.

Turbine blades are subjected to gusting wind loads, driving the accumulation of fatigue damage in the blade structures, leading to failures.

Around 3,800 blade failures a year are attributed to poor maintenance. There’s also a significant financial cost to such manual inspections.

To provide a solution, Forth and its partners are more than half way through a two-year project, funded by Innovate UK, to develop its RADBLAD technology.

The pioneering lightweight portable robot – each section of the RADBLAD system weighs less than 25kg – will make surveys safer, faster, and cheaper, removing the need to put lives at risk.

The differentiation elements of RADBLAD, when compared with other systems, is in the use of radiographic based in-situ inspection, the automatic detection of defects using an artificial intelligent (AI) based software, and the use of a modular approach for the robotic system.

The advantages of this system are early detection of blade (internal) defects, in a quicker, safer and systematic way, while reducing the risk to human operators.

The technology has already been attracting interest from robotics and AI experts around the world and is set to be ready for testing in a representative environment in April 2021 at the Offshore Renewable Energy (ORE) Catapult’s National Renewable Energy Centre in Blyth in Northumberland ready to deliver the solution later in 2021.

Peter Routledge, Forth’s programme manager, said: “RADBLAD is a world-first magnetically-adhering, wall-climbing robot, with a manipulator arm which deploys an x-ray system around a blade.

“An end effector holds the source and detector against the blade, so they move with the blade in the presence of 3-D blade vibrations.

“A crucial and novel extension of RADBLAD lies in the use of a radiographic system for inspection and in providing an integrated solution that offers high-quality, efficient inspection method, which is human-safe.

“Unlike ground radiography inspection, RADBLAD does not require costly, time-consuming onshore dismantling of blades and transportation to workshop, inspection in X-ray bays and return and reassembly, which can take around ten days days during which time revenue is lost due to generating downtime.”

The consortium involved in the project has been able to press ahead with the work, and find solutions to working in a way which allows the project to keep progressing while often operating remotely.

“It has the potential to make significant cost and efficiency savings, with strong prospects in terms of exporting this technology around the world.”

Mark Telford, managing director of Forth, said: “This will be another world-first for Forth and another example of where an industry has a specific challenge and has asked us to come up with a solution. This is the way we like to work and if other industries are facing similar challenges we are always happy to talk to them.”

RADBLAD is the latest in a long-line of world-first products which Forth continues to develop. Its other recent developments have included new products in the fight against COVID-19 and, with partners, it recently successfully demonstrated its Autonomous Aquatic Inspection and Intervention (A2I2) underwater robot set to transform the way a range of industries carry out inspections and maintenance.

Forth also continues to expand its team and its premises to meet the demand for its expertise. Hot on the heels of recruiting four members of the team, Forth is looking to further strengthen with opportunities to recruit for a range of posts including mechanical design engineers and technicians.

Forth has also built three new offices at its headquarters in Maryport, doubled the size of the retail space at its trade counter to include PPE and other essential items, and is making more use of its 68,000 square-feet base in Cleator Moor as an innovation hub. The company also opened a new base in Barrow last year.