The project is expected to be the first of its kind to employ a direct supply of offshore wind renewable power to produce green hydrogen energy, heating up to 300 homes in the first instance 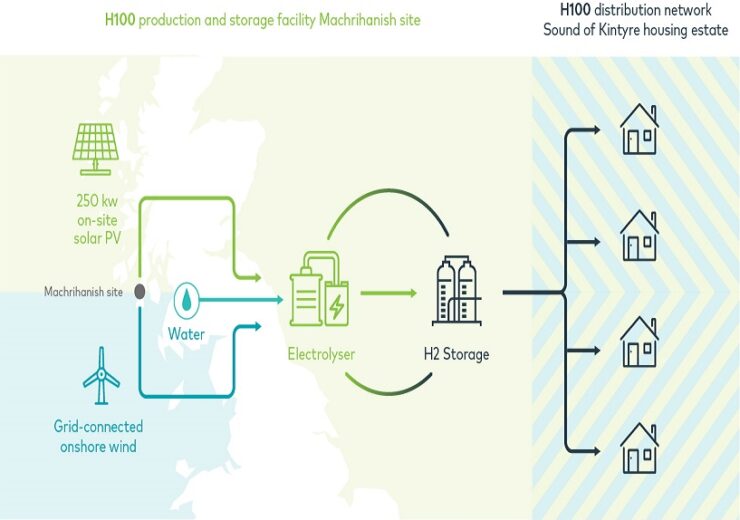 Wood, the global engineering and consulting company, has successfully delivered preliminary engineering design services for gas network operator SGN’s candidate site at Machrihanish, on the west coast of Scotland, as part of its Hydrogen 100 (H100) project.

The H100 demonstration project will initially aim to supply energy to homes in Fife, Scotland. When powered by renewable energy, the generation and burning of hydrogen produces no carbon, making it one of the most effective, scalable ways of providing heating while tackling climate change. On completion, this project will be the first of its kind to employ a direct supply of offshore wind renewable power to produce green hydrogen energy, heating up to 300 homes in the first instance.

SGN manages the network distributing natural gas to 5.9 million homes and businesses across Scotland and parts of southern England. As part of its efforts to decarbonise the energy system and reduce emissions, the company is investigating the role that hydrogen can play, and the H100 project is a key element of this.

As a global leader in hydrogen and renewables, Wood brought together a multi-disciplinary team from across its business including environmental planning, geographical mapping, visualization, process and pipeline engineering, renewables and hydrogen power experts to deliver a turnkey solution for SGN.

Joe Sczurko, CEO of Wood’s Technical Consulting Solutions business, comments: “As we continue to work with our clients on their energy transition journeys, we were delighted to partner with SGN to deliver its innovative plans to use clean fuels for domestic heating. This is a pioneering development which could make a significant contribution towards the decarbonisation of the UK’s heating sector and net zero carbon target by 2050.

“Wood’s track record in the technology, production, and the use of hydrogen is decades-long with a number of successful hydrogen projects delivered for clients around the world. Combined with our renewable and infrastructure expertise, we were well-positioned to support SGN with its ambitious H100 project at Machrihanish.”

As part of the scope of work, Wood’s team secured planning consent, completed the technical feasibility study and provided preliminary engineering design for the candidate site.

“To identify and develop the optimal design for the site under evaluation at Machrihanish, it was essential to draw from the diverse and deep technical expertise we have within Wood,” said Sczurko.

Wood worked on the project in collaboration with the Machrihanish Airbase Community Company Business Park and Airport, which was considered, as one of three possible sites, to host the hydrogen production, storage, and distribution infrastructure. While H100 Fife is proposed as the site for the first hydrogen network, SGN also sees significant potential for 100% hydrogen networks in Machrihanish and Aberdeen at a later date.