German wind industry organisations, in their offshore wind progress report (summarised here) on the first half of 2018, say the standstill in German energy policy must come to an end if sufficient offshore wind is to be developed to meet Energiewende targets. 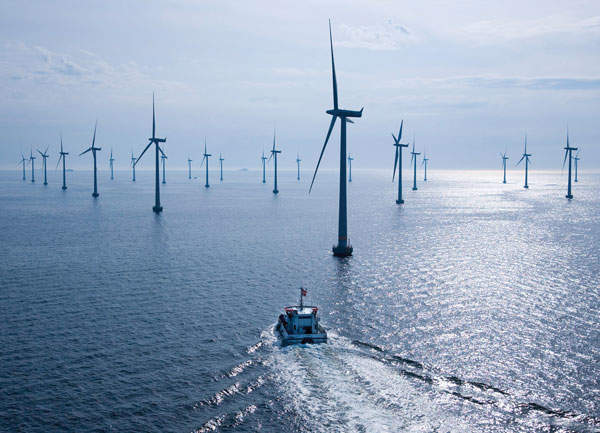 The German government has set the goal of covering 65% of the country’s power generation from renewable by 2030. From a German offshore wind industry perspective, the government is doing too little to achieve this goal.

No concrete steps have been taken since the formation of the new government in March 2018. As stipulated in the coalition agreement, additional tenders for offshore wind energy and an increase in the offshore expansion paths are needed as soon as possible, alongside a rapid increase of the expansion paths for all renewables.

The standstill in energy policy of recent months must be addressed. We call on the federal government to decide on the special contribution expected from offshore wind energy immediately after the summer break. Otherwise, the self-defined climate targets cannot be achieved. The industry also agrees with the transmission system operators on this point.

The expansion of offshore wind energy is currently proceeding according to plan until 2020. As of the end of the first half of 2018, a total of 1169 turbines with an installed capacity of 5,387MW were feeding into the grid. Five offshore wind farms with an installed capacity of 1,944MW were under construction. Of this, some 1,000MW was expected to be connected to the grid by the end of the year.

From the industry’s perspective, the German government must act now if it takes the 65% target seriously. This is also in line with recent decisions at European level that renewables should account for 32% of EU total energy consumption by 2030. To this end, the expansion targets must be increased across all renewable technologies.

An expansion of at least 20GW is required for offshore wind in Germany by 2030. At least 30GW of offshore capacity must be installed by 2035. The existing expansion target of 15GW by 2030 does not meet the federal government’s new targets.

The additional calls for tenders for renewables described in the coalition agreement and originally planned take place before the summer of 2018 must also be implemented. In the case of offshore wind energy, plans should be put in place quickly to introduce additional tenders in 2019 and 2020.

This should include a total capacity of at least 1.5GW in the North Sea and Baltic Sea. In addition to the expansion of renewables, the success of the energy transition in Germany depends largely on grid expansion and progress in “sector coupling” (eg, decarbonisation of heat and transport). The federal government should therefore give priority to the expansion of the large transmission grids and embody the many existing proposals for grid optimisation in law.

For example, recent studies by dena (German Energy Agency) and AGORA Energiewende have shown that a faster expansion of renewables is effectively possible through adoption of grid optimisation technologies. Furthermore, regulatory hurdles in the way of further “coupling of the sectors” should be removed as soon as possible. This includes the possibility of making electricity from offshore wind energy directly applicable for the various Power-to-X applications.

This article was originally published in Modern Power Systems magazine.