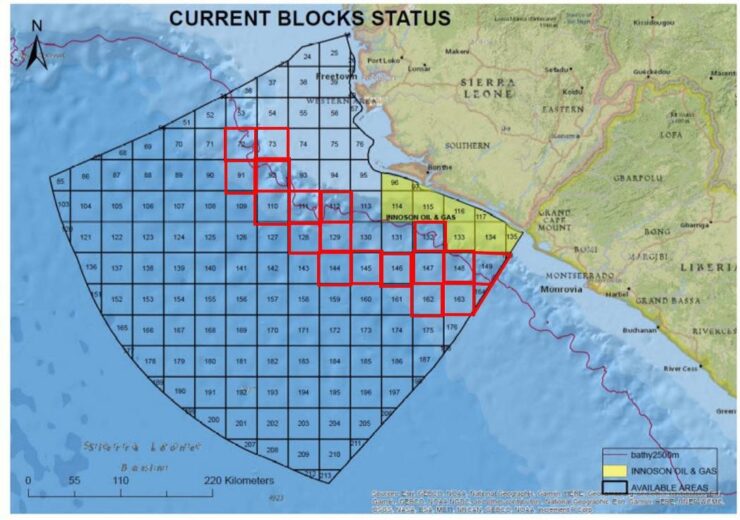 Wildcat Petroleum plc (LSE: WCAT), a company targeting investment opportunities in business and assets within the upstream sector of the petroleum industry, is pleased to announce that after a process of engagement with the Petroleum Directorate of Sierra Leone (PDSL) it has entered into a Reconnaissance Permit Agreement (Permit) over 20 offshore petroleum blocks in Sierra Leone territorial waters comprising a total 24,000 square kilometres. This Permit grants WCAT a non-exclusive right to conduct reconnaissance operations within the relevant blocks for the period of six months from the start of the Agreement.

The Company will carry out a desktop study using geophysical and geological data already acquired in the offshore domain. The objective being to identify those blocks which have the potential to yield commercially viable oil finds. The Permit is non-exclusive and gives WCAT no pre-emptive rights over any of the acreage covered by the Permit. If block(s) with the potential of containing commercially viable oil discoveries are identified then WCAT intends to enter negotiations with the PDSL for a Petroleum Exploration and Production Licence(s). The study area covers acreage that contains two uncommercial oil discoveries (Mercury and Jupiter by Anadarko and partners Tullow & Repsol). Other companies, such as Mobil, Amoco & Lukoil who have also drilled exploration wells in Sierra Leonean waters, have seen hydrocarbon shows in their wells. Out of the 8 wells drilled to date, 3 are sub-commercial discoveries and 3 have hydrocarbon shows.

This indicates that there is a working petroleum system in the offshore. However, the failure to discover commercial quantities of oil, combined with falling oil prices caused companies to subsequently relinquish their blocks.

In the period since these blocks were relinquish billions of barrels of oil resources have been discovered in the Cretaceous fans beneath the deep waters of the Guyana-Suriname Basin in South America – which can be linked tectonically & litho-stratigraphically with the conjugate Sierra Leone Basin. As testimony to the hydrocarbon potential of deep water acreage (specifically deep water fans), we can also note that two exploration wells were drilled this year in Namibian waters by Shell and by TotalEnergies, both discovering what the companies expect to be billions of barrels of oil resources in these types of Cretaceous deep water fans.

Regarding the potential of the Cretaceous deep water plays off Sierra Leone, we can also note that African Petroleum estimated, from 3D seismic data over their (now relinquished) deep water blocks, Prospective Resources of ~ 2.5 billion barrels in a number of large stacked fans. These fans are in what are now, following a reorganisation of blocks onto a rectangular grid in 2018, Blocks 130 and 131 and we would hope to recognise similar fans along the same ‘foot of slope/basin floor fan’ trend in our study area.

We can also note that petroleum exploration (off the passive margins of Africa, South America etc) is increasingly turning to ultra-deep waters (> 2500m water depth) where the potential to find billion barrel oil resources in unconfined toe of slope/basin floor fans is recognised e.g. Westwood Global’s 2018 analysis of drilling and success on the Central Atlantic Margin between 2007 (when Jubilee was discovered in Ghana) and 2018 discusses the lessons learnt from drilling this margin (ie modest success in many countries to date) but points out that only 12 wells out of 128 studied had been drilled into the ‘Basin Floor’ (i.e. Toe of Slope) but that these accounted for > 50% of the total discovered resources and have the highest success rates.

Based on its preliminary analysis; the abundance of data and recent discoveries indicating billions of barrels of oil resources along the West African coastline as well as similar finds in South American conjugate basins, WCAT believes that the offshore Sierra Leone blocks in our study area could offer the company an exciting and economical way to access a share of potentially billions of barrels of oil resources.

A preliminary summary of the geology and potential of the Sierra Leone Basin (using information in the public domain) will be loaded to WCAT’s website subsequent to the publication of this RNS. It will also outline other potential plays in the deep water domain.

It is the intention of the Company to analyse geological/geophysical data over our study area – taking into account learnings from recent deep water discoveries in South America, Namibia etc – in order to identify blocks with the greatest potential.

Mandhir Singh, Wildcat Petroleum Chairman, commented: “In its quarterly review (01/04/22) the company’s management restated its aim in the current high oil price environment to complete a deal which would transform WCAT into a profitable, debt free, dividend paying Oil Company. The extent of the blocks covered by the Sierra Leone deal indicates WCAT’s ambition and the size of assets it is trying to secure. Although the Sierra Leone endeavour is an exploration project the Company’s top priority is to a secure a stake in a producing asset(s) with resources in the billions of barrels.