WEB and Eagle LNG energy deal is a catalyst for growth, prosperity and environmental improvement for Aruba 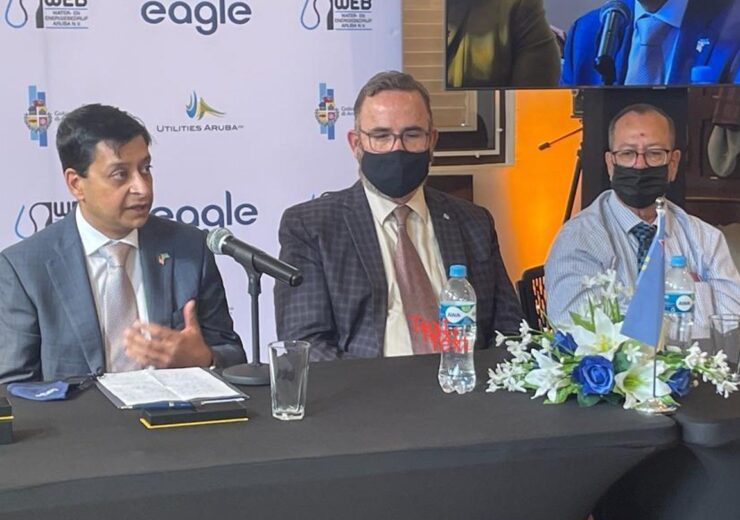 Eagle LNG Partners LLC (Eagle LNG), a US company based in Houston, Texas and Jacksonville, Florida, has completed a long-term supply contract to establish a liquefied natural gas (‘LNG’) receiving and regasification terminal in Aruba with WEB Aruba, the local power and water utility. The project confirms Aruba’s growing importance as a regional hub and creates new economic pillars. Today, the deal was confirmed in a signing ceremony attended by the Minister of Labour, Energy and Integration Glenbert Croes and WEB Aruba AI. CEO, Serapio (Laty) Wever.

The Aruba LNG Terminal will serve as WEB’s LNG receiving and regasification terminal for its Balashi power plant. The Terminal will be located at Refineria di Aruba, an existing industrial location, in San Nicolas, Aruba, where LNG from Eagle LNG, will be received, stored and re-gasified with natural gas delivered to the WEB power plant.  Using LNG for power generation takes advantage of WEB’s existing investment in dual-fuel engines improving environmental performance and stabilizing fuel rates at historically low prices, while enabling the introduction of more intermittent renewable electricity generation on the island.
“LNG fits in WEB Aruba’s vision of cleaner, greener and fuel oil free production and we are working towards sustainable water desalination and energy production and supply. We welcome LNG as a transition fuel that eventually should lead to a mix of 50% renewable energy sources and 50% alternative fuels,” said WEB Aruba AI. CEO, Serapio (Laty) Wever.

The infrastructure investment is approximately US$100 million in Aruba and will create up to 100 local jobs during construction as well as highly-skilled operating jobs with specialized training in critical capabilities required as the world transitions to a net-zero carbon future. The project will introduce low-cost, stable energy to the island and enhance its environmental credentials. By moving to LNG from heavy fuel oil or diesel, there will be a significant reduction in harmful emissions: 30 percent in CO2, 75 percent NOx, 90 percent particulates and 99 percent SOx.

Sean Lalani, President of Eagle LNG, said, “We are committed to investing in the Caribbean basin and are honored to have signed an agreement for another major LNG project, this time in Aruba. Together with recent agreements elsewhere in the Caribbean basin, including the new terminal in Antigua, this further confirms Eagle LNG as the reliable partner of choice for natural gas in the region. The LNG import terminal will result in more environmentally responsible energy supporting the addition of more renewable generation, lower operating and maintenance costs and a stable, historically low-cost, fuel supply. Alongside the economic and environmental benefits, the transition to LNG powered generation will function as a catalyst for new economic pillars in Aruba. We look forward to being a part of Aruba for many years.”

“This is an extremely important project for an Aruba that loves its environment, which will produce energy based upon clean energy that will reduce costs of water and electricity to the benefit of all of Aruba,” said Glenbert Croes, Aruba Minister of Labour, Energy and Integration.

The US Embassy Curacao provided early support for the Aruba project through the US Commerce Department’s advocacy program, which encourages US exports while offering counsel on doing business in a foreign country.