Wärtsilä has developed a detailed energy system model and an analysis on the generation of district heating in Helsinki, Finland. 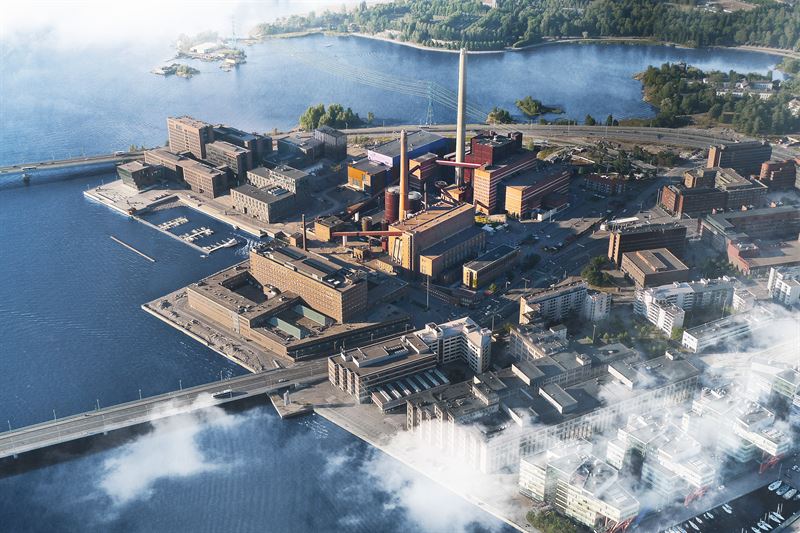 Image: Data centers as heat sources can be located in closed coal plants, such as in Salmisaari in Helsinki. Photo: courtesy of Petri Pietikäinen / Vastavalo.net

The model demonstrates that giving up coal and switching to district heating generated with wind electricity and heat pumps in Helsinki is economically viable and reduces carbon dioxide (CO2) emissions almost 90%.

Low-cost wind power is changing the energy industry in Finland intensely and faster than generally anticipated. The change is creating energy companies new options for generating district heating with low costs and zero emissions. Wärtsilä has created a detailed energy model and analysis of Helsinki’s district heating network that studies replacing coal with both biomass boilers and several alternatives based on the electrification of district heating generation. Potential heat sources for heat pumps in the alternatives based on electrification include seawater, waste heat of data centres, and geothermal heat.

The conclusion of Wärtsilä’s analysis is that the most economical solution for replacing existing coal plants is heat pumps that use wind power as their electricity source and seawater and waste heat from data centres as their heat source. Considering the variable supply of wind electricity, its utilisation in heat production can be implemented by integrating a heat storage and low-emission fast-startup gas engine power plants into the generation model, which allows optimising the generation according to the market price of electricity.

Engine power plants provide back-up power for data centres if needed, and they are used for optimising the district heating and wind power generation. In the model presented by Wärtsilä, data centres are located in closed coal plants in Hanasaari and Salmisaari in Helsinki. The undersea coal silos of Salmisaari are suitable to be converted into district heating storages.

“Our model enables examining several solutions based on numerical facts. In our analysis, we have compared alternatives based on heat pumps or burning biomass as replacement for existing coal plants. In Finland, biomass-based fuels have been traditionally considered as the best replacement for coal in district heating, but the possibility for low-cost heat through wind power significantly reduces the need for using biomass and makes giving up coal economically viable already today,” says Matti Rautkivi, Director, Strategy and Business Development, Wärtsilä Energy Business.

The savings in the production costs of district heating are over 10% compared to the current situation relying on coal, whereas a portfolio based on using primarily biomass would increase production costs roughly 9% compared to the current situation. Large seawater heat pumps are used in heat production in several locations around the world, for example in Stockholm since 1984. Waste heat from data centres is already utilised in Finland in Mäntsälä, with new projects being planned in various locations, such as Espoo. The first deep geothermal district heating plant is under construction in Otaniemi, Espoo.

Replacing coal plants with heat pumps would reduce the CO2 emissions of electricity and district heating production in Helsinki almost 90% compared to the current situation. In terms of emission reduction, this corresponds to removing over a million passenger cars from Finland’s roads. The emission reduction is real because the energy model includes new wind power generation that equals the amount of electricity used by the heat pumps. CO2 emissions can be lowered even further if engine power plants switch to using biogas or synthetic gas in the future.