One research aim is to prepare for operations at ITER, the large international fusion facility currently under construction in France 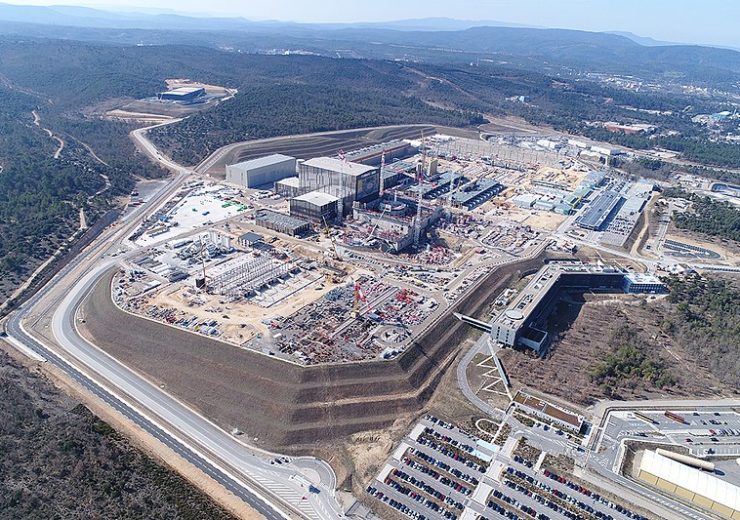 The ITER site in France during construction in 2018. (Credit: Oak Ridge National Laboratory)

The US Department of Energy (DOE) announced up to $50m in crosscutting Departmental funding for programs to support fusion energy research and development.

The Office of Science announced an award of $20 million to research fusion energy at both U.S. and international facilities, focusing on the use of spherical tokamaks, which represents a promising route to the development of fusion as a practical energy source.

The initiative will support research by U.S. scientists at a range of existing fusion facilities in the U.S., U.K., and other countries with current bilateral agreements with the United States.

The initiative will also provide support for research at the National Spherical Tokamak Experiment Upgrade (NSTX-U) at DOE’s Princeton Plasma Physics Laboratory in Princeton, N.J., when it resumes operations. Currently completing repairs, NSTX-U is expected to resume operations in May 2021.

One research aim is to prepare for operations at ITER, the large international fusion facility currently under construction in France.

“In addition to having potential performance advantages, spherical tokamaks can serve as excellent research instruments to probe key physics problems prior to burning plasma operation in ITER,” said Under Secretary for Science Paul Dabbar. “This initiative will help keep American scientists in a leadership role as we move toward the goal of cost-effective fusion energy for the world.”

DOE’s Advanced Research Projects Agency-Energy (ARPA-E) and the Office of Science’s Fusion Energy Sciences program (FES), in a joint funding effort, will award up to $30 million in funding to research and develop a range of enabling technologies required for commercially attractive fusion energy.

The program called Galvanizing Advances in Market-aligned fusion for an Overabundance of Watts (GAMOW), will prioritize R&D particularly in (1) all the required technologies and subsystems between the fusion plasma and the balance of plant, (2) cost-effective, high-efficiency, high-duty-cycle driver technologies, and (3) important cross-cutting areas such as novel fusion materials and advanced and additive manufacturing.

“The successful development of fusion energy systems has the potential to create an abundant, safe, carbon-free power source for a wide range of uses,” said ARPA-E Director Lane Genatowski, “We’re excited to partner with the Fusion Energy Sciences program in pursuit of our mission to support transformational energy projects. Together, we are equipping America’s energy researchers with the funding, technical assistance, and market readiness to create the energy systems of the future.”

For more than sixty years, fusion research and development has largely focused on attaining the required fuel density, temperature, and energy confinement time required for a viable fusion energy system. Over time, investment into the basic enabling technologies and advanced materials that are needed to support successful fusion energy has grown, but there remains a significant need for progress in this space before a fusion energy system can become commercially attractive. The GAMOW program seeks to address this need by funding projects that support innovative R&D for fusion energy subsystems and cross-cutting research.

Awardees will demonstrate success through one or more of the below high-level program objectives:

ARPA-E will contribute up to $15 million in funding over the three-year program period, while the FES will contribute up to $5 million a year for three years for qualifying technologies. GAMOW will also have a technology-to-market focus, requiring applicants to identify how their proposed project will help enable commercially attractive fusion energy systems beyond the end of the program, and builds off of ARPA-E’s existing fusion energy programs, Accelerating Low-Cost Plasma Heating and Assembly (ALPHA) and Breakthroughs Enabling THermonuclear-fusion Energy (BETHE).