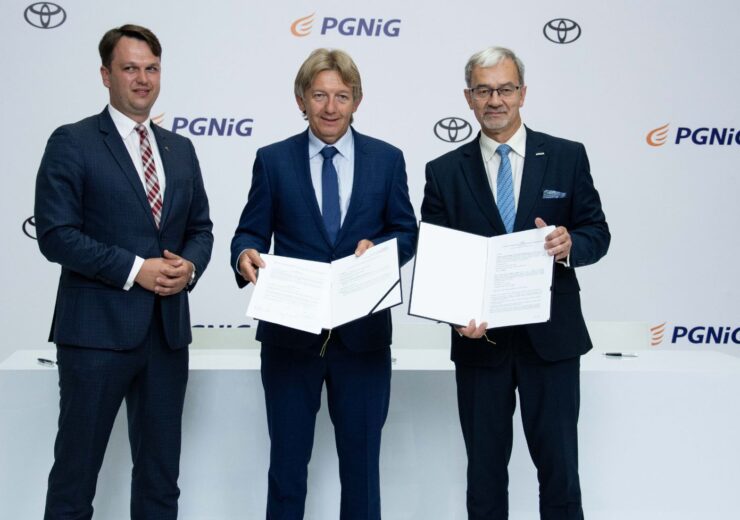 Toyota Motor Poland and Polish Oil and Gas Company (PGNiG) signed an agreement on cooperation in advancing hydrogen technology in Poland. A pilot hydrogen refuelling station will be built under the agreement.

‘The launch of a pilot hydrogen refuelling station will be PGNiG’s first step in the implementation of the Group’s hydrogen programme. In testing the station we will work with Toyota, a partner with a strong reputation in the automotive industry and a leading manufacturer of hydrogen-powered vehicles. I am confident this partnership will contribute to successful advancement of the hydrogen fuel market in Poland,’ said Jerzy Kwieciński, President of the PGNiG Management Board.

PGNiG’s hydrogen research programme unveiled in May provides for the production of hydrogen, including green hydrogen using renewable energy sources, hydrogen storage and distribution, and industrial applications. The operation of a hydrogen refuelling station, to be built in the Wola district of Warsaw, is also part of the programme. PGNiG has already signed a contract with a consortium of Poland- and UK-based companies for the design and construction of the station.

‘Operation of the pilot station will help PGNiG to acquire hydrogen competencies relevant to such projects. We aim to expand our product range to include hydrogen, also as a motor fuel, which would complement our CNG and LNG offering and contribute to the advancement of low-emission and zero-emission gas mobility in Poland,’ said Arkadiusz Sekściński, Vice President of the PGNiG Management Board, Development.

The agreement forges a partnership between two entities actively involved in the development of the Polish Hydrogen Strategy. The joint operations are intended to introduce hydrogen as a clean fuel for zero-emission fuel cell vehicles on the Polish market. Hydrogen has been hailed by experts as a fuel of the future.

Toyota Motor Poland, representing the global leader in the development of hydrogen technology for automotive applications in Poland, is preparing to launch the second generation of its Mirai passenger car next year. It is the first hydrogen-powered sedan car manufactured on a mass scale. Compared with the previous version, the new generation fuel cell car has a driving range extended by 30%, to 650–900 km on a single tank. Refuelling will only take a few minutes, making the car fully functional and environmentally friendly.

“In the automotive industry, we are currently dealing with a revolution, and Toyota as a global brand has been supporting the development of the entire sector for years, including by sharing patents. As Toyota Motor Poland, we have been one of the leaders in innovation and electromobility for years. We are glad that we will work with PGNiG as our partner to make the most effective use of hydrogen at all stages. Engineers of both brands will jointly participate in the process of designing and building a hydrogen refueling station, as well as planning and conducting research,” said Jacek Pawlak, President of Toyota Motor Poland and Toyota Central Europe.