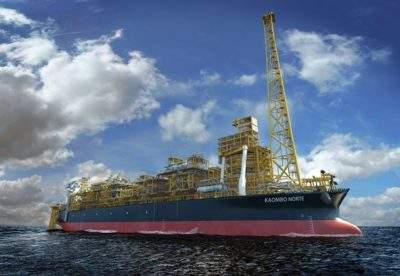 The Kaombo project, which had started production in July 2018, is located in water depth of about 2,000m in Block 32, and is located 260km off the coast of Luanda.

Currently, production from the deep offshore development is carried out by the Kaombo Norte floating production, storage and offloading (FPSO) vessel, which has a capacity of 115,000bopd. Another FPSO with a similar capacity in the form of Kaombo Sul is slated to begin production in 2019.

Saipem was given a $3bn engineering, procurement, installation and commissioning contract for the two FPSOs, which in turn selected ALP Maritime Services (ALP) to deliver five vessels to carry out tow assistance and heading control services for the Kaombo project.

As part of the Kaombo project, 59 wells will be connected to the two FPSOs. Both the vessels are converted from very large crude carriers, and will produce from six different fields – Gengibre, Gindungo, Caril, Canela, Mostarda and Louro, located in the central and southern part of Block 32.

Overall, the production from the Kaombo project is estimated to be 230,000bopd at peak. The associated gas from the project will be transported to the Angola LNG plant.

Total is the operator of the Angolan offshore block with a 30% stake. It is partnered by Sonangol P&P (30%), Sonangol Sinopec International 32 (20%), Esso Exploration & Production Angola (Overseas) (15%) and Galp Energia Overseas Block 32 (5%).

At the inauguration of the Kaombo project, Total also announced two new projects in Angola in the form of the CLOV phase 2 project and the Dalia phase 3 project. In May, the company launched the Zinia 2 project offshore Angola in Block 17.

The CLOV phase 2 project, which is estimated to have a production plateau of 40,000 barrels of oil per day (bopd), will see drilling of seven additional wells. First oil from the project is anticipated to be achieved in 2020.

The Dalia phase 3 project would need drilling of six more wells. First oil from the project is likely to be drawn in 2021 with the field to have a production plateau of 30,000bopd.

Total expects to develop 150 million barrels of additional resources through the Zinia 2, CLOV 2 and Dalia 3 projects to sustain production plateau in excess of 400,000bopd until 2023 at Block 17.

Total chairman and CEO Patrick Pouyanné said: “I would like to recognize the leadership shown by the Angolan President, João Lourenço, and the joint efforts of the authorities, Sonangol and the industry to enhance contractual framework, which is an essential step towards developing new projects.

“The sanction of these new projects today demonstrates Total’s ongoing commitment to Angola and to the continued development of oil and gas resources in the country.”