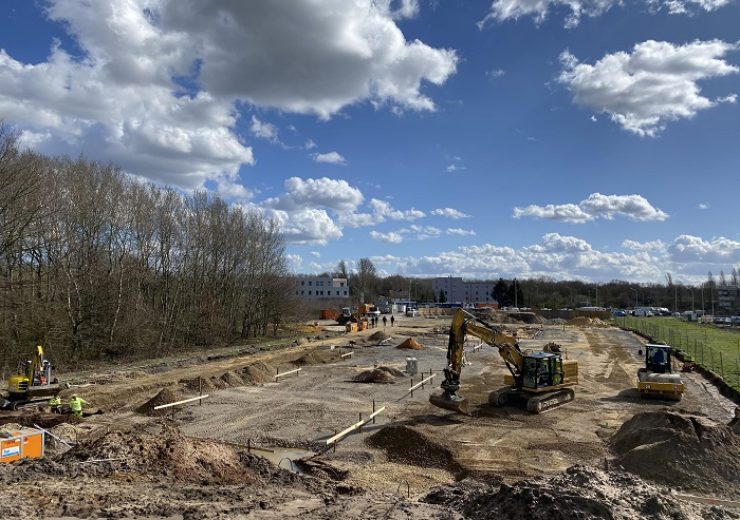 The German manufacturer Tesvolt is supplying energy storage containers offering a total capacity of 2 megawatt hours (MWh) for Europe’s largest electric car charging park at the Kreuz Hilden junction. Various companies will offer a total of 114 charging stations, including 40 V3 Tesla Superchargers and 22 fast charging stations from Dutch supplier Fastned. Every charging station will be supplied with 100-percent green power, sourced in part from a large rooftop photovoltaic installation above the charging park. The site will also host office buildings and a bistro with a vertical farming greenhouse. The Seed & Greet charging park will be operated by an organic baker from Hilden.

Around 235,000 cars pass through the Kreuz Hilden junction connecting the A3 and A46 motorways in North Rhine-Westphalia, Germany, every day. This is where the largest charging park project in Europe will come to fruition, set to cover 12,000 square metres. Motorists will be able to charge their electric vehicles at 62 fast charging stations from Tesla and Fastned boasting charging power of up to 350 kilowatts (kW). In addition, there are another eight public charging stations with a charging capacity of up to 22 kW and 44 charging stations for employees and tenants that will be operated by organic baker Roland Schüren — the owner of the charging park. While waiting for their cars to charge, motorists can enjoy a coffee or a bite to eat at the bakery and café, where bread and pastries are baked fresh on-site. Or they can visit the vertical farming greenhouse, which covers 1,000 square metres over four storeys and supplies lettuce, strawberries and blueberries for use in the bakery. The bakery’s waste heat is reused for the vertical farming project as well as for heating and hot water. The first phase of construction, including approximately half of the charging stations, is set to be completed in August.

The battery storage systems manufactured by Tesvolt in Wittenberg, Germany, will temporarily store electrical energy from the photovoltaic installation — rated above 700 kilowatts peak — and two small wind power installations to reduce costs associated with peak loads. They will also store green energy from the public grid when it is particularly inexpensive and relieve the grid when there is more energy available than is being drawn. Gregor Hinz, energy consultant and general technical planner for the project, expects that the two storage systems will have paid for themselves within just a few years. The federal state of North Rhine-Westphalia will also cover a portion of the investment costs as part of its progres.nrw funding scheme.

“Of course, it is particularly important that a charging park’s storage systems can be quickly charged and discharged at any time. Currently, only a very few storage products are capable of this,” says Hinz. He had included three commercial storage system manufacturers on the shortlist for the charging park project. He says that Tesvolt set itself apart in the end because the TPS flex storage container offers impressive performance while being relatively compact and is one of the few systems on the market capable of fulfilling the high technical demands. The smart battery management system developed by Tesvolt engineers ensures that the cells are charged and discharged as efficiently as possible and gives the storage system a high life expectancy of approximately 30 years. Tesvolt has already won a number of awards for its innovative concepts and products.

“We bakers are really feeling the effects of climate change. The dry weather over the past few years has made the flour obtained from our organic farmers much harder to process. With the Seed & Greet charging park, I want to show that climate conservation is not only essential for environmental reasons, it also pays off economically,” Roland Schüren explains. The entrepreneur already outfitted his bakery in Hilden with a sophisticated, integrated energy system twelve years ago, for which he has garnered many accolades. He relies on electric and natural gas-powered vehicles to deliver his organic baked goods to 20 locations and employs a staff of 260. The Seed & Greet charging park is his latest project.

“E-mobility makes all the more sense when electric cars are charged with renewable energy. The Kreuz Hilden charging park is a fine example of this — we admire the project’s holistic approach and we are extremely proud to have been selected to provide the storage systems,” says Daniel Hannemann, CEO and co-founder of Tesvolt.