Ethanol from agave could be used for biofuels and hand sanitiser 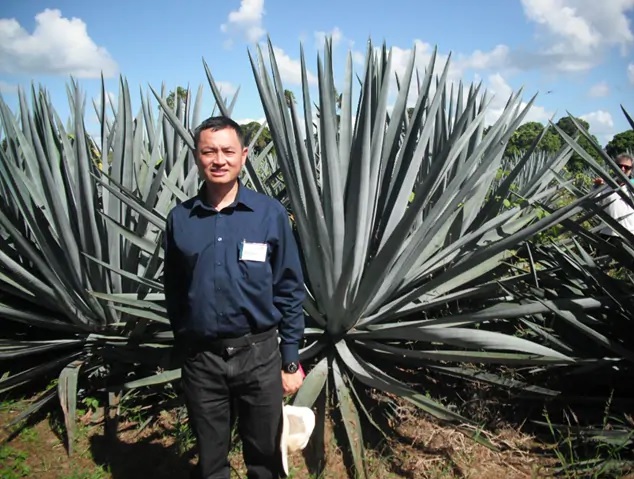 Associate Professor Daniel Tan in Queensland in front of agave plants. (Credit: The University of SYDNEY)

The plant better known for making tequila requires no irrigation and produces comparable or better yields of ethanol than sugar or corn. Economic analysis shows a first-generation crop will need government support to kickstart an industry, researchers say.

The agave plant used to make tequila could be established in semi-arid Australia as an environmentally friendly solution to Australia’s transport fuel shortage, a team of researchers at the University of Sydney, University of Exeter and University of Adelaide has found.

The efficient, low-water process could also help produce ethanol for hand sanitiser, which is in high demand during the COVID-19 pandemic.

In an article published this week in the Journal of Cleaner Production, University of Sydney agronomist Associate Professor Daniel Tan with international and Australian colleagues have analysed the potential to produce bioethanol (biofuel) from the agave plant, a high-sugar succulent widely grown in Mexico to make the alcoholic drink tequila.

The agave plant is now being grown as a biofuel source on the Atherton Tablelands in Far North Queensland by MSF Sugar, and it promises some significant advantages over existing sources of bioethanol such as sugarcane and corn, Associate Professor Tan said.

“Agave is an environmentally friendly crop that we can grow to produce ethanol-based fuels and healthcare products,” said Associate Professor Tan from the Sydney Institute of Agriculture.

“It can grow in semi-arid areas without irrigation; and it does not compete with food crops or put demands on limited water and fertiliser supplies. Agave is heat and drought tolerant and can survive Australia’s hot summers.”

Lead author Dr Xiaoyu Yan from the University of Exeter, who led the lifecycle assessment, said: “Our analysis highlights the possibilities for bioethanol production from agave grown in semi-arid Australia, causing minimum pressure on food production and water resources.

“The results suggest that bioethanol derived from agave is superior to that from corn and sugarcane in terms of water consumption and quality, greenhouse gas emissions, as well as ethanol output.”

This study used chemical analyses of agave from a pilot agave farm in Kalamia Estate, Queensland (near Ayr) undertaken by Dr Kendall Corbin for her University of Adelaide PhD, supervised by Professor Rachel Burton.

“It is fabulous that the results of my chemical analysis can be used in both an economic and environmental footprint study and have real-world applications”, Dr Corbin said.

Economic analysis
“The economic analysis suggests that a first generation of bioethanol production from agave is currently not commercially viable without government support, given the recent collapse in the world oil price,” Associate Professor Tan said. “However, this may change with the emerging demand for new ethanol-based healthcare products, such as hand sanitisers.”

“This is the first comprehensive lifecycle assessment and economic analysis of bioethanol produced from a five-year agave field experiment in north Queensland. Our analysis shows a bioethanol yield of 7414 litres a hectare each year is achievable with five-year-old agave plants.”

The study found that sugarcane yields 9900 litres a hectare each year. However, agave outperforms sugarcane on a range of measures, including freshwater eutrophication, marine ecotoxicity and – crucially – water consumption.

“This shows agave is an economic and environmental winner for biofuel production in the years to come,” Associate Professor Tan said.

FICEP: A single partner for all production technologies in Area 1