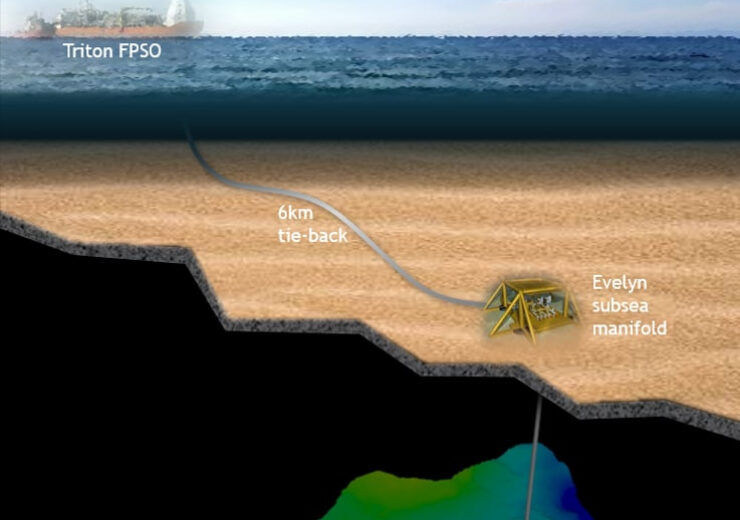 Illustration of the subsea tieback of the Evelyn field to the Triton FPSO. (Credit: Tailwind Energy Ltd)

Tailwind Energy has secured approval from the UK Oil and Gas Authority (OGA) of the development plan for the Evelyn field in the UK Central North Sea.

The OGA approval has enabled the UK-based company to take a final investment decision on the Evelyn field development. First production from the oil and gas field located in the Triton Area is expected in the fourth quarter of 2022.

The Evelyn field will be developed initially as a one well subsea tieback to the Triton floating production storage and offloading (FPSO). The Triton FPSO is operated by Dana Petroleum and is located in block 21/30, nearly 193km east of Aberdeen, Scotland.

According to Tailwind Energy, there is provision for future additional wells to be drilled at the Evelyn field.

The company stated: “Tailwind has worked hard to develop Evelyn, consistent with OGA’s MER strategy, since acquiring the licence in 2018. Evelyn production will form a key future component of the Triton FPSO Hub.”

The first horizontal well at the Evelyn field will be spudded in the latter half of this year. The 6km long subsea tieback is expected to be completed in the summer of next year.

Tailwind Energy forayed into the field through the Triton cluster deal in 2018 with Shell and ExxonMobil. The acquisition included a 100% operatorship of the production licence 1792, which contains both the Evelyn and Belinda discoveries.

The Belinda oil and gas discovery is also being planned to be developed as a subsea tieback to the Triton FPSO, based on the success of the Evelyn field development.

Currently, the Triton FPSO is producing from the Bittern, Guillemot West & Guillemot Northwest, Gannet E, Clapham, Pict, and Saxon fields, which make up the Triton Area.