SoCalGas and Electrochaea commission new biomethanation reactor in US

Installed at an NREL facility in Colorado, the biomethanation reactor system is a pilot project to demonstrate conversion of renewable electricity into renewable methane 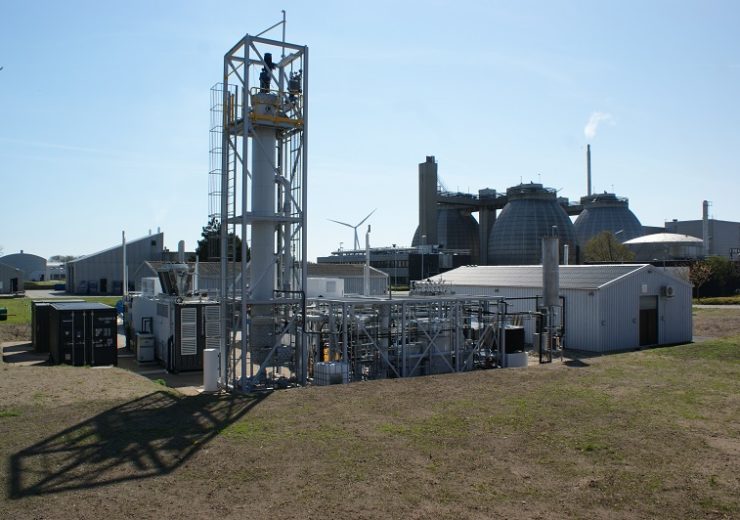 Southern California Gas Co. (SoCalGas) and Electrochaea have commissioned the first scalable biomethanation reactor system in the US to convert hydrogen into renewable natural gas that can be stored in existing natural gas pipelines.

According to SoCalGas, the biomethanation plant uses renewable power to convert hydrogen into pipeline-quality methane for residential, commercial and transportation purposes.

In the next two years, the biomethanation reactor system will evaluate the commercial viability of the power-to-gas approach to energy storage and decarbonisation. It will be used for giving insights into future mega-watt scale system designs.

How the biomethanation reactor system works

A two-step process is adopted by the reactor system to produce biomethane, or renewable natural gas. In the first step, solar energy is used to pass through an electrolyser where water molecules are separated into hydrogen and oxygen and, as a result, the renewable power is stored as hydrogen gas.

In the second step, the newly-created hydrogen is mixed with carbon dioxide and piped into the reactor where archaea microorganisms generate renewable natural gas. This is achieved by consuming hydrogen and carbon dioxide to emit methane.

SoCalGas business development senior director Yuri Freedman said: “In order to achieve our climate goals, we need to find solutions to the difficult problem faced with renewables like wind and solar – the issue of intermittency, and extensive mismatches between the periods of renewable energy generation and consumer demand.

“This project shows our existing natural gas pipeline infrastructure can store excess renewable energy for periods of time ranging from seconds to months.”

The biomethanation reactor system has been designed to recycle carbon dioxide from a range of sources like ethanol plants and anaerobic digesters, thereby offsetting greenhouse gas emissions and replacing the consumption of fossil methane, said SoCalGas.

The catalyst for the biomethanation plant was developed originally at the University of Chicago, while the basic methanation system was designed by Germany-based Electrochaea.

The biomethanation reactor system, which operates at 50-60% efficiency in Colorado, is said to build upon and advances previously conducted research by Electrochaea. For every 10KWh of power received by the water electrolysis model, the equivalent of 5-6KWh of methane is produced by the microbes, said SoCalGas, a major natural gas distribution utility based in California.

Electrochaea CEO Mich Hein said: “With SoCalGas and NREL demonstrating the scalability of this technology we can soon realise safe and reliable storage of renewable energy well beyond the capacity of batteries. A simultaneous benefit will be lowering the overall carbon intensity of the natural gas grid, as we have already accomplished with parts of the electrical power grid.”

SoCalGas said the next phase of the biomethanation project is to focus on boosting the process efficiency, automating its operations, cutting down capital costs and identifying locations in California and other parts in the western US for its implementation.