SMA Solar Technology (SMA) and its subsidiary SMA Sunbelt Energy have realized French Polynesia’s first integrated solar power and battery-storage system with an output of over 1MW on the island. 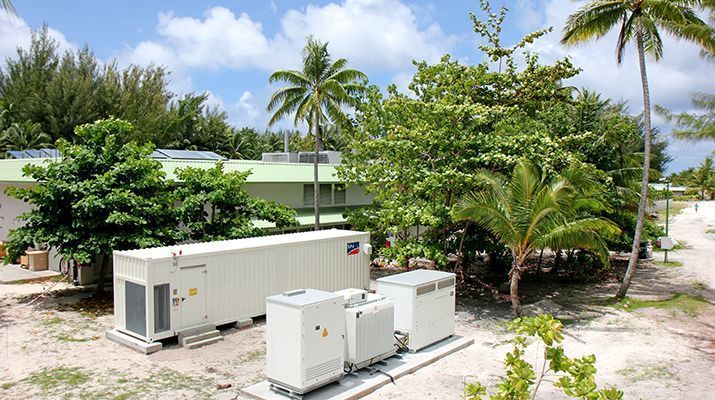 60% of the electricity demand is covered with solar energy. In addition, up to 500,000 liters of fuel can be saved on the island every year.

“The Brando resort already had a PV system along the landing strip, the output of which has doubled to 1.4 megawatts with the update and expansion,” explained Wiebke Krüger, Project Manager at SMA Sunbelt Energy GmbH. “Thanks to the integration of the battery-storage system with a capacity of 2.6 MWh, 60% of the electricity supply now comes from solar energy. The island’s grid quality was also improved once again. The Sunny Central Storage battery inverter from SMA with grid-forming properties and the new black start function, combined with the SMA Hybrid Controller, ensures that after a power failure a stable network can be formed again within seconds and can be reliably hold.”

Resort is a model for sustainable projects

“We have benefited from SMA and SMA Sunbelt Energy GmbH’s wealth of experience with island electrification projects. I am delighted that we have been able to further enhance sustainability on Tetiaroa with the PV system and integrated battery-storage system,” said Richard Bailey, CEO of Pacific Beachcomber, the operator of the resort. “We are very happy with the update and expansion of the PV system as well as the installation of the battery-storage system. The protection and conservation of the unique natural environment are personally very important to me. For some of our guests, The Brando serves as inspiration and a model for the implementation of their own sustainable projects.”

By day, The Brando resort’s electricity supply comes exclusively from solar energy and batteries; the generators start up automatically only if needed. The uninterruptible power supply for the guests is guaranteed in the case of cloud cover and even at night, if the generators fail. Electricity is then provided from the batteries. The resort has achieved a LEED Platinum certification (certification for sustainability) for its buildings. The setup of a Sea Water Air-Conditioning system reduces electricity consumption by up to 90% while ensuring comfort at the highest standard. Only two hotels in the world offer this system: the InterContinental Bora Bora Resort & Thalasso Spa and The Brando, both built by Pacific Beachcomber.

The Brando is situated on Onetahi island in the Tetiaroa atoll in the South Pacific. The Hollywood star Marlon Brando (The Godfather) purchased the island in 1967 after filming Mutiny on the Bounty and resolved to preserve the unique South Sea paradise he found there. Thanks to the commitment of Richard Bailey, a sustainable vacation resort opened there in 2014 and has already entertained numerous prominent guests. In addition The Brando has built the ecological station of the Tetiaroa Society who offers research, nature conservation and educational programs in the spirit of Marlon Brando.