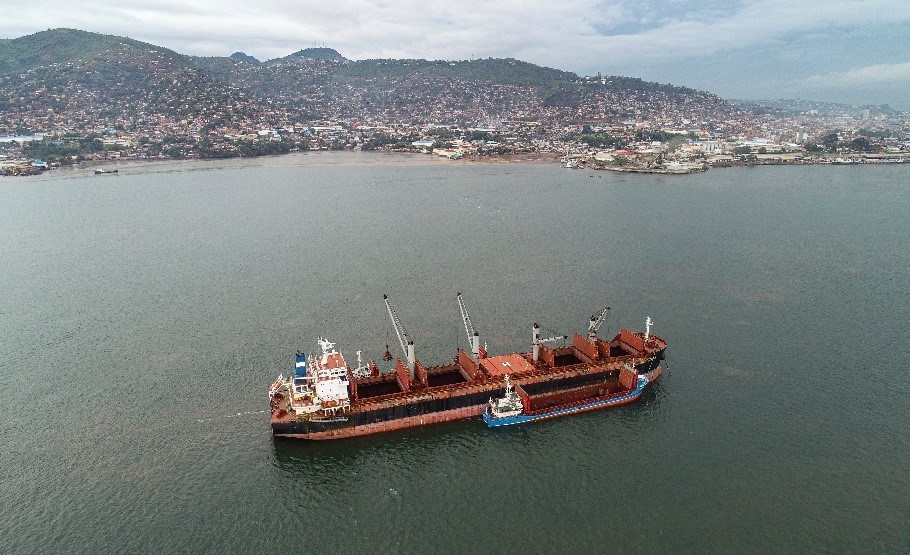 Image: The shipment will be delivered to customers in China. Photo courtesy of SL Mining.

Sierra Leone’s Minister of Mines and Minerals, Rado Yokie said that iron ore exports had been dormant for four years: “Today is a historic day,” said Mr. Yokie. “As Marampa Blue is a very high-grade ore, and coming from Sierra Leone, it sends a good signal to the world that this Country is ready for business. It is a feather to Sierra Leone’s mining cap,” he added.

Craig Dean, Chairman of Gerald Group and SL Mining said: “SL Mining’s first shipment departed from Freetown Port safe and sound. This is a proud day and a key milestone for SL Mining, and for our employees and contractors who have been working on this complex project to restore production of iron ore at the Marampa mine, alongside local communities and the Government of Sierra Leone. I would like to thank everyone involved.”

“SL Mining forms an important strategic asset in Gerald Group’s global portfolio. Our goal is to make ‘Marampa Blue’ an internationally recognised premium grade iron ore brand. As we continue to build on our progress so far, to deliver sustainable and responsible mining in Marampa, we intend to expand the delivery of high-grade >65 percent iron ore concentrate to markets in Europe and Africa,” Mr. Dean added.

Located in the Port Loko District, in the northern province of Sierra Leone, SL Mining is engaged in the exploration, development and production of ‘Marampa Blue’, a high-grade iron ore concentrate with >65 percent Fe content. SL Mining was awarded a renewable Large-Scale Mining License granted under the Mines and Minerals Act, 2009 In March 2017 for a term of 25 years, emphasizing the strong support for the Marampa project locally, and reflecting its significant importance to the national economy. Together with Gerald Group’s international expertise in metals, finance, strategic investments and experienced management teams and employees, SL Mining aims to build a resilient and long-life iron ore mine in Sierra Leone and to expand operations by integrating mining, processing and rail and port logistics, alongside playing a responsible role in the economic and social stability of the Lunsar region.