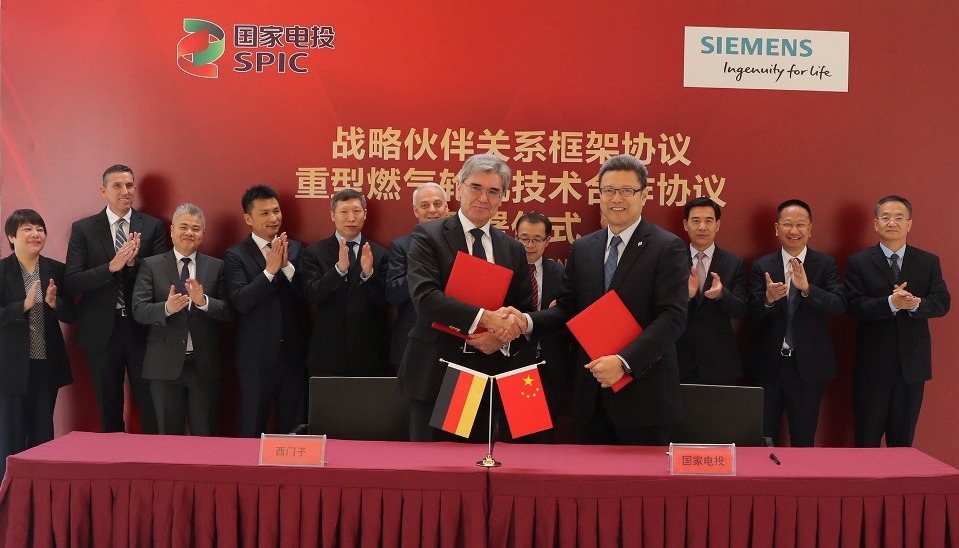 Image: Signing of the Partnership Framework Agreement by SPIC Chairman and Siemens President and CEO. Photo: Courtesy of Siemens AG.

This follows a Technology Collaboration agreement on heavy-duty gas turbines between Siemens AG and China United Heavy-duty Gas Turbine Company (UGTC). The SPFA was signed by Qian Zhimin, Chairman of SPIC and Joe Kaeser, President and Chief Executive Officer of Siemens AG on March 26, 2019 in Beijing. The SPFA will further expand the cooperation in power generation in addition to the earlier agreed technology collaboration between Siemens AG and UGTC and will create a China-based supplier eco-system. Both companies will also collaborate in high-technology product demonstration e.g. in the field of digitalization of power plants or in hydrogen utilization projects and smart energy management for a decentralized energy system. Furthermore, both parties agreed to cooperate in project execution, and will jointly develop proper Gas-to-Power projects worldwide.

“With this agreement, both parties are set to benefit from the expected structural growth in China’s electricity generation market,” said Joe Kaeser, President and CEO of Siemens AG. “This agreement marks a further important milestone following our successful technology collaborations with Chinese enterprises over the last decades. The objective of both parties is to form a longstanding partnership extending beyond the scope of the agreements announced today,” Kaeser added.

The previously signed agreement for technology collaboration in the field of heavy duty gas turbines between UGTC and Siemens follows the Memorandum of Understanding with SPIC, the majority shareholder of UGTC, which was already announced in July 2018. UGTC will complete the goal of developing China’s indigenous generation of heavy-duty gas turbines independently. Under the terms of the agreement, Siemens will support UGTC’s heavy-duty gas turbine program with its technical experience in the design, engineering and testing. The goal of both agreements is to establish a long-standing win-win partnership for both parties.

Electricity demand in China is continuing to grow and the government is determined to improve air quality by switching from coal to natural gas in its energy mix. Against this background China is already one of the world’s most important markets for gas turbines and its importance will even grow further in the years to come.