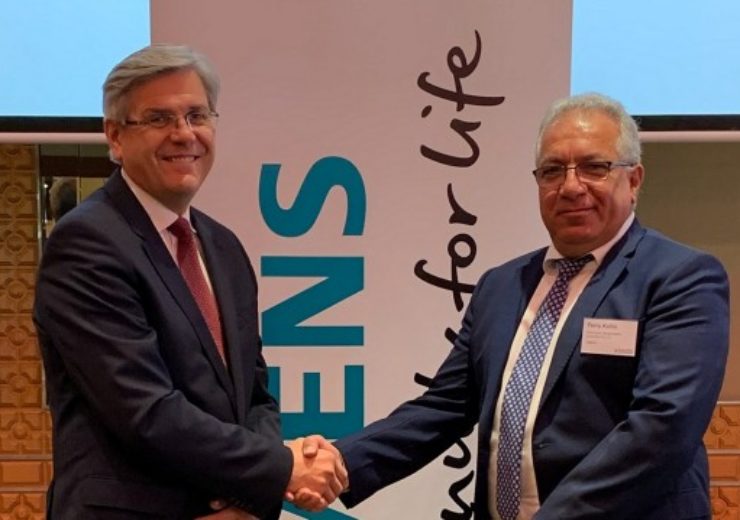 Image: Officials from Siemens and HRA. Photo: courtesy of Siemens.

Siemens has signed an agreement with Hydrogen Renewables Australia to become the technology partner for a green hydrogen plant, which will combine wind, solar and green hydrogen, with a generation capacity of 5000MW, in Western Australia.

Planned to be built on Murchison House Station in Perth, the Murchison Renewable Hydrogen Project will use Siemens’ electrolysers.

The renewable electricity produced by the technologies will be used by the facility to produce green hydrogen gas.

Hydrogen Renewables Australia executive chairman Terry Kallis said: “We believe that Murchison Renewable Hydrogen Project’s location is the best in Australia for combined solar and wind, making it one of the most cost-effective spots to produce clean energy.

“We also believe that the project will contribute significantly to the national, state and local objectives for new investment, new jobs, renewable energy sources and new export markets.”

“This project will not only help local industry but also the growing demand for green hydrogen from Asian and other markets.”

Murchison Renewable Hydrogen Project will be developed in three phases

Situated near the town of Kalbarri on West Australia’s coast, the facility will be developed in phases starting with a demonstration phase which will generate hydrogen for transport fuels.

The second stage involves production of hydrogen for blending with natural gas in the nearby Dampier to Bunbury pipeline while the third phase involves a large expansion to produce hydrogen for exports to markets in Asia, such as Japan and South Korea.

Siemens said in a statement: “Situated just north of the coastal town of Kalbarri in WA’s mid-west region, the location is proposed as it has one of the best combinations of wind and solar capabilities in Australia that could facilitate cost-effective production of green hydrogen for local industry and global export.”

As part of the plan, HRA has signed a heritage agreement with the local Nanda Aboriginal Corporation (NAC). The two parties also initiated the development of an Indigenous Land Use Agreement which is planned to be finalised in 2020.