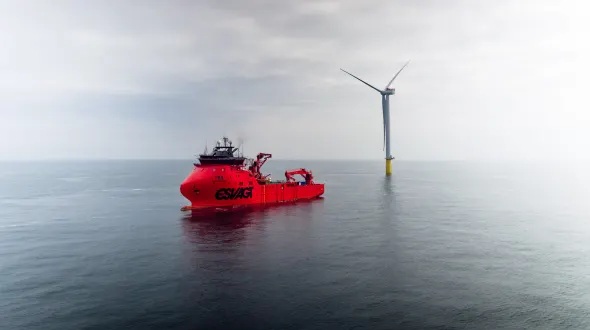 ESVAGT is exploring the possibility of transporting tools from vessel to WTG via drone. (Credit: ESVAGT)

Siemens Gamesa, marine services provider Esvagt, and Danish power company Ørsted are working on a project to develop drone-based solution for the delivery of spare parts and tools from vessel to offshore wind turbine.

Esvagt new services business development head Flemming Hjorth said: “When we transfer a WTG technician from vessel to WTG, he brings both spare parts and tools with him.

“But it often happens that the technician needs additional equipment, tools or spare parts while inside the WTG.

“Today, such a scenario requires the vessel to return to the WTG or that we send a transfer boat over to the WTG with the necessary gear, which the technician then has to get down and get. This process can be optimised.”

The drones will be have capacity to transfer packages weighing up to four kilograms directly to the nacelle.

As part of the project, Siemens Gamesa, Ørsted and ESVAGT will work with several subcontractors to develop new solution.

Hjorth added: “Most often, it is the small spare parts that make a difference: smaller electrical components or a specific tool. Delivering these with a drone could potentially spare us a tremendous amount of time and contribute to making the operation of the offshore wind farm even more efficient.”

The project is backed by European Regional Development Fund

Sponsored by the European Regional Development Fund, the project will run until June 2020.

“Our ambition is to get a drone to transport spare parts between two variable points, following a route that will be adjusted along the way.

“It is complex, even when using drone pilots, and it becomes even more demanding once you add the changing weight of the cargo, the wind’s impact, the use of magnetic compass in an offshore farm with lots of steel, and so on. But the potential in finding a solution is extremely interesting,” Hjorth further said.