As part of the contract, Siemens Gamesa will deliver 72 units of its SG 14-236 DD offshore wind turbines for the Danish offshore wind project, which is expected to be fully operational by the end of 2027 and generate enough clean energy to power over one million households 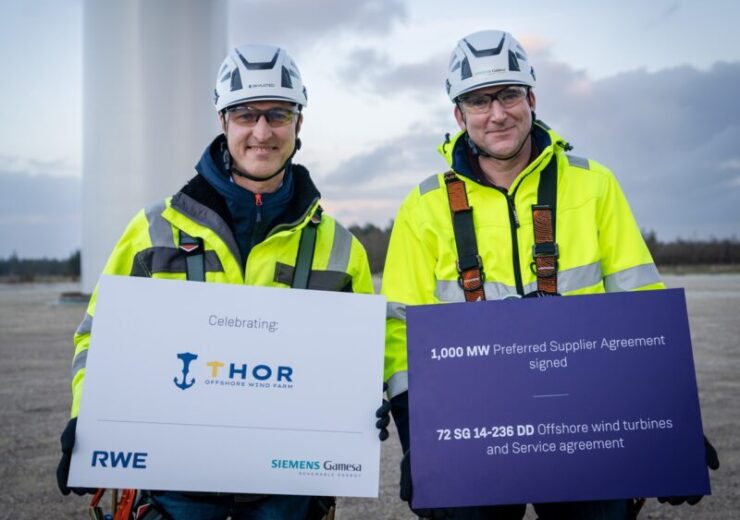 Siemens Gamesa has also signed a service contract for the turbines of the Thor project.

The installation of the wind turbines for the offshore project is anticipated to commence in 2026.

RWE said that the installation works of the turbines are planned to be undertaken at the port of Esbjerg.

“Connecting in Denmark today is a testament to our commitment to the country, and to the benefits we all gain from the Østerild test centre.”

The Thor offshore wind farm is expected to generate enough clean energy to power over one million Danish households.

RWE is expected to establish a service base for the operation and maintenance of the Thor wind project at the port of Thorsminde, which will be fully operational from 2026 onwards and generate up to 60 jobs.

“In order to deploy this offshore project, we will rely on our track record of more than 20 years in offshore wind and on experienced suppliers, like Siemens Gamesa, which are committed to working hand in hand with Danish supply chain companies and the local workforce.”

The supply of the wind turbines for the project is subject to the German energy firm’s final investment decision, stated RWE.

In October 2022, RWE selected Siemens Energy and HSM Offshore Energy as its preferred suppliers for the electrical transmission system for the Thor offshore wind farm.