Siemens Gamesa Renewable Energy (SGRE) has awarded the first two local supply contracts to Swancor and a partnership between CS Wind and Chin Fong, for offshore wind projects in Taiwan. 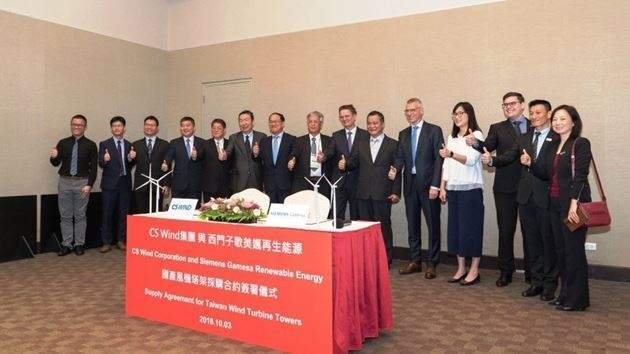 Swancor will supply resin used in the blades for the Formosa 1 Phase 2 offshore wind power plant.

Swancor resin has been chosen for Formosa 1 Phase 2 blades as a result of cooperation between SGRE and Swancor, along with a long-term partnership between the two parties. The blades are due for installation in 2019.

Swancor chairman Robert Tsai said: “We are pleased to be selected by the world leader in offshore wind SGRE, a trusted partner of Swancor.

“We would like to express our gratitude to SGRE for assisting Swancor in becoming part of their global supply base, and eager to strengthening our cooperation, both in Taiwan and globally.”

SGRE has also signed a contract for the supply of local towers from CS Wind and its partner Chin Fong.

The partnership will initially manufacture and supply towers for upcoming Taiwanese projects under local content requirements.

SGRE secured preferred supplier status for the project in May 2018.

The project is expected to feature 80 SG 8.0-167 DD wind turbines, which will be installed in two phases.

“We strongly believe in the combination of their specialist knowledge with Chin Fong’s skills and strong local connection in Taiwan.”