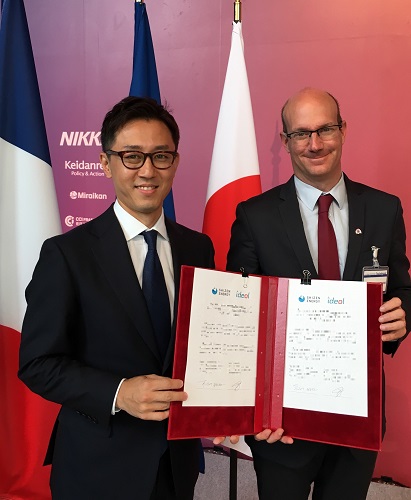 Image: The project aims to maximize the expertise and resources of both companies. Photo: Courtesy of SHIZEN ENERGY Inc.

This agreement was signed in Tokyo today by Mr de La Guérivière, CEO of Ideol, and Masaya Hasegawa, Representative Director of Shizen Energy, and Bruno Le Maire, French Minister of Economy, attended the signing ceremony and has declared.

Through the collaboration, the project aims to maximize the expertise and resources of both companies in order to contribute to the development and expansion of floating offshore wind power generation and renewable energy.

Shizen Energy has contributed to the development of approximately 800 megawatt worth of renewable energy across Japan, and is expanding its portfolio from Solar to Wind and Hydro power generation business. In addition, Ideol is the world’s only engineering company which achieves floating offshore wind projects in two different sea areas, including one in Japan off Kyushu. Currently, Ideol and Shizen are jointly examining the implementation of floating offshore wind power projects in Kyushu and are also considering expanding the partnership to other regions in the future.

Masaya Hasegawa, founder of Shizen Energy said, “Working on floating wind projects in Japan means to expand the country’s potential of renewable energy significantly, as the country is surrounded by sea areas with deep water and complex geographies. This is especially valuable challenge for Shizen Energy, aim to co-create 100 % renewable-powered world. We believe that our collaboration will accelerate the potential of renewable energy in Japan.”

Paul de la Guérivière, CEO of Ideol said, “With our two full-scale demonstrators in operation in France and in Japan, as well as a pre-commercial wind farm under development in the French Mediterranean, Ideol and its patented Damping pool® technology are at the forefront of a cost competitive and rapidly accelerating floating offshore wind industry. We are very excited by another collaboration agreement in this strategic market for IDEOL; this truly confirms that our technology is recognized as having the highest potential at a commercial-scale level”.