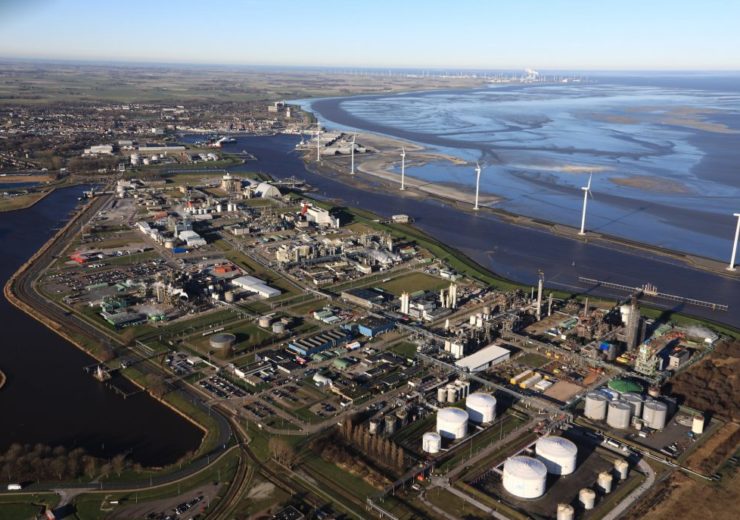 Chemical Park Delfzijl with Eemshaven at the back. (Credit: Groningen Seaports)

The consortium plans to commence the feasibility study for the project in 2020. The project aims to produce green hydrogen using renewable electricity generated by a mega offshore wind farm.

By 2040, the NortH2 project will have an annual green hydrogen production capacity of 800,000 tonnes with power from up to 10GW of offshore wind turbines in the North Sea.

The consortium plans to initially install offshore wind complex of between 3GW and 4GW by 2030.

Shell Nederland president-director Marjan van Loon said: “Together, we are launching an ambition that puts the Netherlands at the forefront of hydrogen globally.

“In addition, it contributes to achieving the objectives of the Dutch Climate Agreement and accelerates the energy transition.”

The NortH2 project involves the construction of a large electrolyser unit in the town of Eemshaven, along the northern coast. The electrolyser will convert wind energy into green hydrogen.

Scheduled to be commissioned in 2027, the green hydrogen project will be powered by the first completed wind farms. The consortium is also exploring options to place electrolysers offshore.

The consortium is also seeking potential partners for the project, which is expected to create thousands of jobs in the northern Netherlands.

Groningen Seaports said that a smart transport network is also planned to be built in the Netherlands and Northwest Europe to deliver the 800,000 tonnes of green hydrogen to industries initially and to consumers at a later stage.

Gasunie CEO Han Fennema said: “We have the North Sea for the production of wind, the ports as logistical hubs, and the industrial clusters that want to make the switch to green molecules and a suitable transport network.

“This comes together perfectly in the northern Netherlands at the Groningen Seaports where the conversion to hydrogen takes place, with storage in Zuidwending and an ambitious province.”