As per the terms of the agreement signed between QatarEnergy and Shell, the latter will get an effective stake of 9.37% of a 25% stake on offer by QatarEnergy in the 16MTPA Qatari liquefied natural gas project 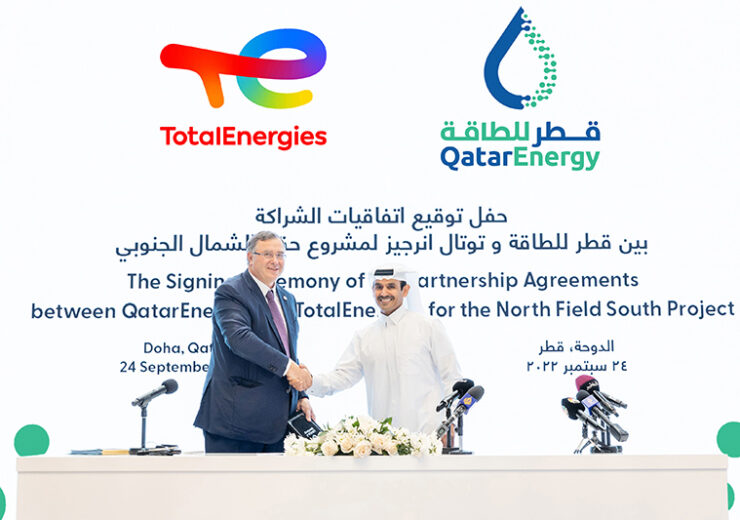 QatarEnergy and Shell sign agreement for the NFS project in Qatar. (Credit: QatarEnergy)

QatarEnergy said that Shell is joining the North Field South expansion project (NFS project) in Qatar as its second international partner after TotalEnergies.

As per an agreement signed between QatarEnergy and Shell, the latter will have an effective stake of 9.37% in the NFS project. This is out of a 25% stake on offer by QatarEnergy, which retains a 75% stake in the liquefied natural gas (LNG) project.

Shell CEO Ben van Beurden said: “I am delighted that Shell’s strategic partnership with QatarEnergy is further deepened through our participation in the North Field South project.

“LNG has a key role in ensuring energy system reliability and our investments with QatarEnergy will support the energy transition and energy security, two of the most fundamental challenges the world faces today.”

Last month, the Qatari energy company struck a similar deal with TotalEnergies, giving the latter a 9.37% stake in the two train-project, 9.375% which will have a capacity of 16 million tons per annum (MTPA).

The NFS project is being taken up to increase the total LNG production capacity of Qatar to 126MTPA. It is part of the larger 48MTPA North Field expansion project.

QatarEnergy said that a third partnership for the LNG project will be revealed in due course.

Qatar Minister of State for Energy Affairs, President, and CEO Saad Sherida Al-Kaabi said: “The new LNG volumes, which Qatar will bring to the market, come at a time when natural gas assumes greater importance in light of recent geopolitical turmoil, and amidst the dire need for cleaner energy to meet global environmental objectives.

“These volumes are a welcome addition given the increasing global concern not just over energy security, but also over a pragmatic energy transition as well as fair and equitable access to cleaner energy.”