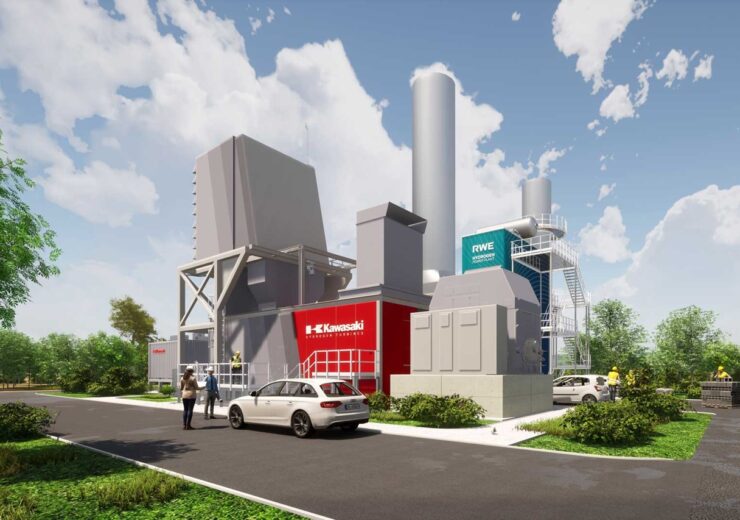 Illustration of the hydrogen-fuelled gas turbine to be developed by RWE and Kawasaki in Lingen. (Credit: RWE)

RWE is joining forces with Japan-based Kawasaki Heavy Industries with an aim to install a hydrogen-fuelled gas turbine based on renewable green hydrogen in Germany.

The gas turbine installation will be done under the H2GTLingen joint-demonstration project.

Set to be named GPB300 / L30A, the turbine will have an electrical output of 34MWe. Supplied by Kawasaki, it will be designed to reconvert green hydrogen to power at RWE’s Emsland gas-fired power plant in Lingen.

According to Kawasaki, H2GT-Lingen will be among the first pilot projects in the world to evaluate 100% hydrogen-to-power conversion on an industrial scale turbine.

The plant is expected to begin operations in mid-2024.

Through H2GT-Lingen, RWE expects to gain experience in operating a hydrogen-fuelled turbine, as part of its efforts to change its gas-fired power plants from natural gas to hydrogen over time in line with its decarbonisation strategy.

RWE generation CEO Roger Miesen said: “One of the greatest challenges of the energy transition is to ensure a secure CO2-free electricity supply at all times – even when wind and sun are not sufficiently available.

“Hydrogen-fuelled, gas-fired power plants will make an important contribution to ensuring this in the future. In order to gain experience with the operation of such plants, Kawasaki and RWE are planning a pilot project with a hydrogen-powered turbine in Lingen.”

The pilot project is expected to see the testing of the turbine across changing operating load ranges of 30%-100%. This corresponds to the usual load curves of gas turbines that can be anticipated in an electric grid with an increasing share of renewable energies, which are subject to fluctuations caused by weather conditions.

Kawasaki is said to have developed two types of combustion systems for achieving 100% hydrogen operation. One is a diffusion flame, while the other is a dry-low-emission (DLE) combustor.

In a subsequent phase, the diffusion flame combustor will be replaced by a micro-mix DLE combustor (MMX-combustor).