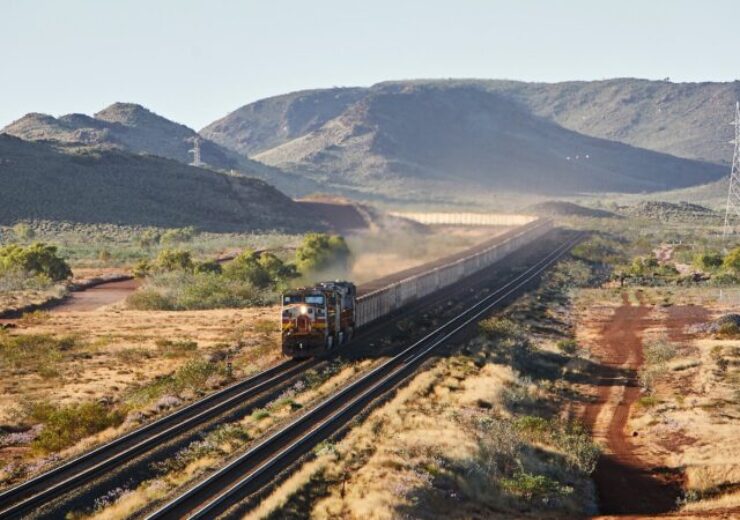 Rio Tinto has loaded AutoHaul trains with ore from the process plant of the Gudai-Darri iron ore mine. (Credit: Rio Tinto)

Rio Tinto has drawn the first ore from the A$4.3bn ($3.1bn) Gudai-Darri iron ore mine in the Pilbara region in Western Australia.

The project represents the company’s first greenfield mine in the Pilbara in more than 10 years.

Rio Tinto said that the Gudai-Darri project will help in supporting the future production of its flagship Pilbara Blend product. The mine has an expected life of over 40 years and a capacity of 43 million tonnes per year.

Rio Tinto iron ore chief executive Simon Trott said “The commissioning of Gudai-Darri represents the successful delivery of our first greenfield mine in over a decade, helping to support increased output of Pilbara Blend, our flagship product.

“It sets a new standard for Rio Tinto mine developments through its deployment of technology and innovation to enhance productivity and improve safety.

“I’d like to acknowledge the support of the Traditional Owners, the Banjima People, on whose country Gudai-Darri is situated. We have worked closely with the Banjima People to progress this project and we look forward to continuing to actively partner with them into the future.”

Rio Tinto said thar the autonomous AutoHaul trains were loaded with ore from the process plant of the iron ore mine. The ore will travel across the new 166km rail line that links to the existing rail and port infrastructure of Rio Tinto.

According to the miner, production from the Gudai-Darri iron ore mine will continue to be increased during the rest of this year. The mine is anticipated to achieve full capacity next year.

The company said that a feasibility study for supporting an expansion of the new hub is also in progress.

Rio Tinto chief technical officer Mark Davies said: “In building this new hub we have brought together the best of our innovations, including autonomous trucks, trains and drills, as well as the world’s first autonomous water trucks, to make Gudai-Darri our most technologically advanced iron ore mine.”

Rio Tinto stated that the commissioning and ramp-up of the mine are likely to boost its iron ore production volumes and enhance the product mix from the Pilbara in the latter half of this year.

The company said that its full-year shipments guidance for the current year stays at 320 to 335 million tonnes, subject to risks pertaining to the ramp-up of new mines, weather as well as management of cultural heritage.