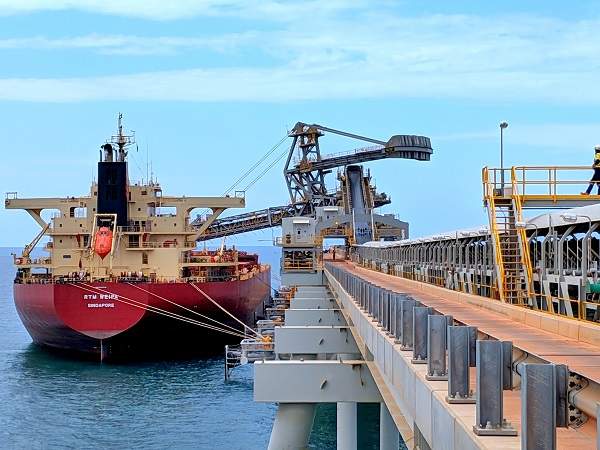 Image: First bauxite from the Amrun bauxite mine is loaded onto the RTM Weipa vessel. Photo: courtesy of Rio Tinto.

The Amrun bauxite mine, which is located on the Wik-Waya traditional land in Cape York Peninsula, along with the plant and export facility were approved by Rio Tinto in 2015. The bauxite project was taken up to meet the growing demand for the commodity in China.

According to the mining giant, Amrun and its associated processing and port facilities will replace production from its depleting East Weipa mine, while boosting annual bauxite export capacity by nearly 10 million tons.

Amrun is located some 40km south of the Rio Tinto-owned East Weipa and Andoom mines.

Construction on the Amrun project began in 2016 and the first bauxite was extracted in 2018. Bechtel handled the engineering, procurement, construction and management (EPCM) of the project under an A$160m ($113m) contract.

The bauxite project saw development of an open-cut mine, construction of processing plant and bauxite stockpiles, a 20MW diesel-fueled power station, warehouses, a barge/ferry terminal, and ship loading facilities.

The first shipment from the bauxite mine was made in December 2018, more than a month ahead of schedule, to the company’s Yarwun alumina refinery in Gladstone, Queensland.

At full production, the Amrun bauxite mine will have capacity of 22.8 million tons per year, with options for further expansion to up to 50Mtpa, through its expected mine life of 40 years.

Amrun, which is expected to extend the life of Rio Tinto’s Weipa bauxite operations by more than 40 years, involved 1,200 people during the peak of its construction. For the operations of the bauxite mine, 500 or so people are expected to be engaged by the mining giant.

“Amrun will provide jobs, support businesses and contribute to growth in the region for the next 50 years, building on $A2.2 billion of contracts with local, State and national businesses [during construction].”