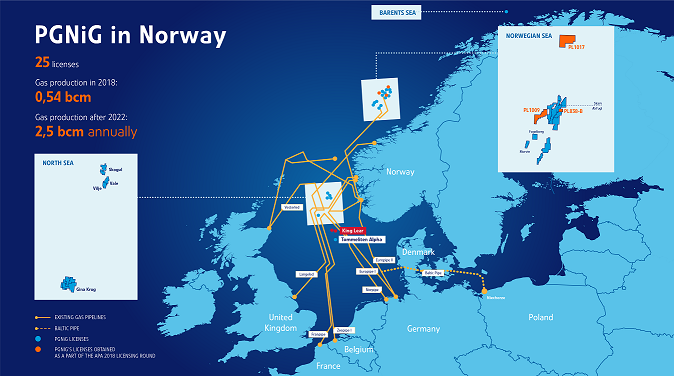 PGNiG Upstream Norway has agreed to acquire 22.2% stake in King Lear field located in PL146 and PL333 licenses in the Norwegian Continental Shelf, from Total E&P Norge for undisclosed amount.

PGNiG management board president Piotr Woźniak said: “King Lear is one of the largest undeveloped discoveries in the North Sea. This is another purchase PGNiG has had recently on the Norwegian Continental Shelf.

“This way, we develop our upstream operations in Norway consistent with the strategy of PGNiG Group. The gas produced from this field will be directed to Poland by the future Baltic Pipe gas pipeline.”

King Lear gas and condensate field will commence production in 2025

Planned to commence production in 2025, the King Lear gas and condensate field is operated by Aker BP.

Commenting on the acquisition, Aker BP CEO Karl Johnny Hersvik earlier said: “The King Lear discovery is one of the largest undeveloped discoveries on the Norwegian Continental Shelf, and represents an excellent opportunity for Aker BP. Our goal is to develop King Lear as a satellite to Ula.

“This will improve the capacity utilization at the Ula facilities and provide significant additional volumes of injection gas to support increased oil recovery from the Ula field.”

In 2018, PGNiG Upstream Norway acquired 42.4% stake in the Tommeliten Alpha field from Norwegian oil and gas giant Equinor for $220m.

Located on the North Sea, south of King Lear, the Tommeliten Alpha field is located near large, already developed fields like Ekofisk, the Tommeliten discovery. It anticipated to be brought into production in 2024.

PGNiG said that it holds interests in 25 licenses on the Norwegian Continental Shelf, including operator on four of the licenses, after finalizing the recent transaction.