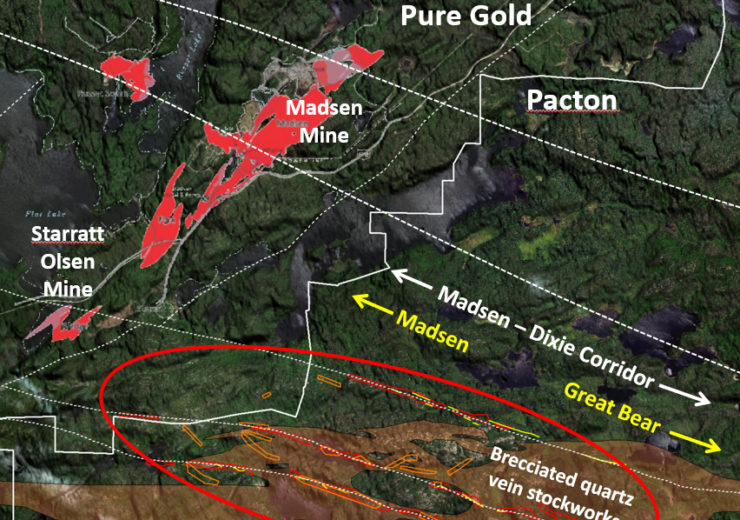 Pacton Gold is pleased to announce that it has commenced drilling targets along the LP extension at its Red Lake gold project in Ontario. To date, the Company has drilled approximately 3,000 m of its 10,000 m program.  Pacton has been granted exploration permits for 38 holes within the area defined by the inset.

Figure 1 shows Pacton’s extensive property presence in the Red Lake area, including the large joint venture interest TomaGold holds with Goldcorp (Evolution Mining and Newmont), which Pacton is in the process of acquiring.  Pacton recently announced that it had entered into a letter of intent to acquire TomaGold’s 39.5% interest in the joint venture (see Pacton news release dated January 31, 2020).  The acquisition of the joint venture is subject to a number of conditions, including completion of a definitive agreement and acceptance of the TSX Venture Exchange.  The joint venture exists to explore the large Sidace Lake property that is contiguous to Pacton’s Golden Loon property (see Pacton news release dated July 29, 2019). The TomaGold Goldcorp JV is an advanced gold project with over 81,600 meters of historic drilling. Pacton will enter the joint venture as project Operator and plans to aggressively expand the mineralized zones at the project with exploration drilling.

Using historic government data and 2019 geological mapping information, approximately 1,300 spatially constrained foliation measurements were used to identify predominant structural fabric clusters and then subjected to machine learning to interpolate between measurements and numerous gold occurrences in the Red Lake area. Flexures in the structural fabric were classified as areas of structural complexity and extension zones that may be favourable for hosting gold mineralization.

In late 2019, the data analysis generated numerous zones of high prospectivity. Most of the generated targets were associated with noticeable magnetic and Lidar structures and tend to occur in a geological unit described as an “intermediate to felsic volcanic breccia”, as illustrated in Figure 2. The onset of winter conditions prevented mapping or sampling of the prospective areas, and only one target area was visited. The area is intensively brecciated, and contains dense quartz stockworks in surface outcrops that also show pervasive silica-sericite alteration.