The agreement was signed in Tirana Albania, by representatives from each entity: Svetoslav Ivanov, Executive Director of Overgas; and Arber Avrami, CEO of Albgaz 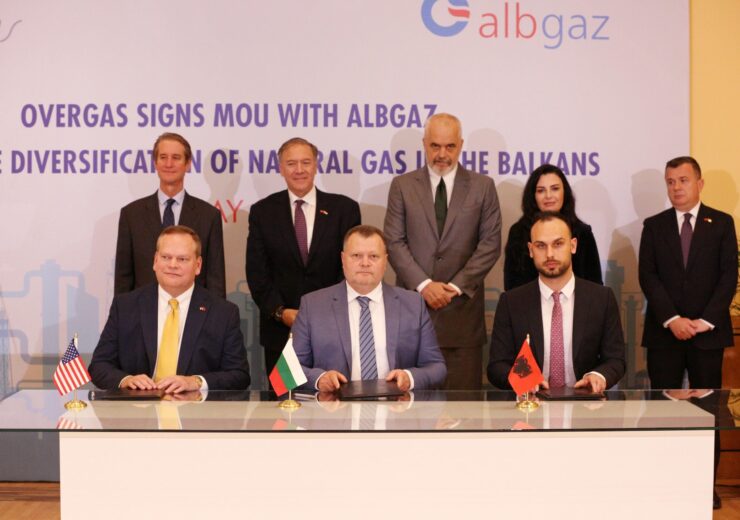 Albania’s Albgaz Sh.a (Albgaz) and Bulgaria’s Overgas Inc. AD (Overgas) have signed an MOU expressing their mutual intent to cooperate on bankable projects that will diversify natural gas supplies throughout the Balkans.

“This MoU opens a new window of qualitative cooperation in between our companies, enabling coordinated progress towards shared goals of energy security and diversification of resources. For Albania, this Memorandum underscores the new reality shaped by ambitious projects, in which the consequence of the energy crises can be mitigated with an integrated strategy that foresees our role as contributors in the regional energy architecture.  In this regard, the mutual understanding we share with Overgas that is reflected in this memorandum solidifies the commitment of the Albania to enable access to gas projects such as LNG Vlora, thus casting light on the near-future optimistic scenarios” said Albgaz CEO Arber Avrami, CEO of Albgaz.
The MOU outlines the parameters of the parties’ planned cooperation to secure natural gas from non-Russian sources via commercially viable projects driven by the private sector.

Svetoslav Ivanov, Executive Director of Overgas said: “We are excited to begin working with a fellow regional gas company such as Albgaz. The signing of this agreement is a first step in regional cooperation to diversify gas supply to the Balkans.”

The agreement was signed in Tirana Albania, by representatives from each entity: Svetoslav Ivanov, Executive Director of Overgas; and Arber Avrami, CEO of Albgaz. Also in attendance was Albanian Prime Minister Edi Rama; Albanian Energy Minister Belinda Balluku; and Overgas Board Member Ambassador Matthew Bryza. Additionally, Overgas’ 50% shareholder (pending final approval by the Bulgarian government), Linden Energy, was represented by Stephen Payne, the company’s President; and by former US Secretary of State Mike Pompeo, Chairman of the Linden Energy Advisory Board.

“This project marks the first step in a private sector-led effort, with strong support from the Albanian and US governments, to establish a new energy corridor that could help all Balkan countries, as well as  Balkans, Ukraine and Moldova, reduce their dependence on Russian natural gas,” noted Overgas Board Member Ambassador Matthew Bryza

“As one of the only US companies involved in the Balkans’ regional gas trade, Linden Energy is excited to take this first step as part of Overgas in partnership with Albgaz,” said Stephen Payne.

Regarding the MOU, Secretary Pompeo said “At a time of great uncertainty in the European energy market, I am proud to be a part of a team that  is addressing this issue head-on. The Balkan region is one of the most vulnerable in terms of the lack of energy diversity and the signing of this MOU is a strong step in the right direction.”