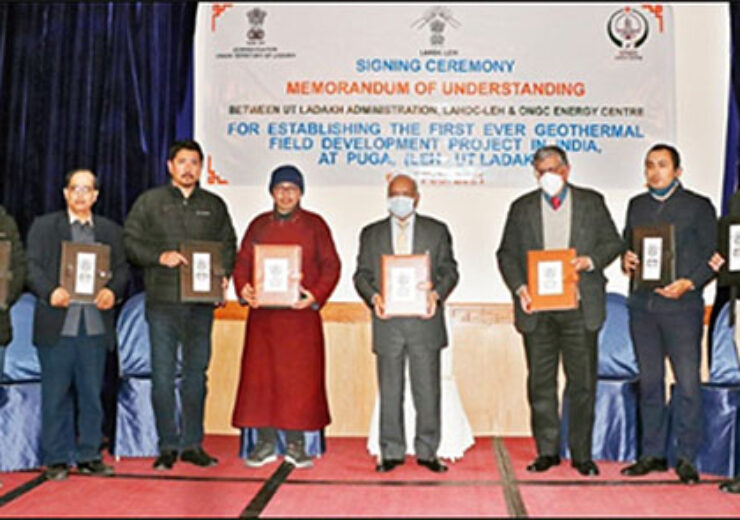 Signing of the MoU for enabling the implementation of the geothermal energy project in Ladakh. (Credit: Oil and Natural Gas Corporation Ltd.)

Oil and Natural Gas Corporation (ONGC) has signed a Memorandum of Understanding (MoU) to execute a geothermal field development project in Ladakh, India.

The MoU has been signed by ONGC’s unit ONGC Energy Centre (OEC) with the Union Territory (UT) of Ladakh and Ladakh Autonomous Hill Development Council, Leh.

The project will involve the development of the Puga and Chumathang geothermal fields to produce geothermal energy. It will mark the first geothermal project in India.

ONCG said that by making use of geothermal resources, farming in Ladakh can be revolutionised. Currently, the Himalayan territory completely depends on the supply of fresh vegetables and fruits from other places, throughout the year.

The Puga and Chumathang geothermal fields will be developed in three phases, said the company.

In phase 1, ONGC will undertake exploratory-cum-production drilling of wells up to a depth of 500m and install a pilot power plant with a capacity of up to 1MW.

The second phase will see deeper and lateral exploration of the geothermal reservoir. This will be through the drilling of optimal number of wells and by installing a higher capacity demo power plant.

ONGC will prepare a detailed project report before advancing to phase 3 which will see the company develop the project at commercial scale.

Despite of their discoveries in the 1970s, the Puga and Chumathang geothermal fields have not been exploited yet for producing geothermal energy due to some reasons, as per ONGC.

The company stated: “After creation of UT Ladakh, efforts were taken up earnestly by ONGC Energy Centre, culminating in this MoU.”