This milestone signifies the beginning of NuScale Power Module manufacture, a critical next step in the deployment of NuScale’s clean energy technology 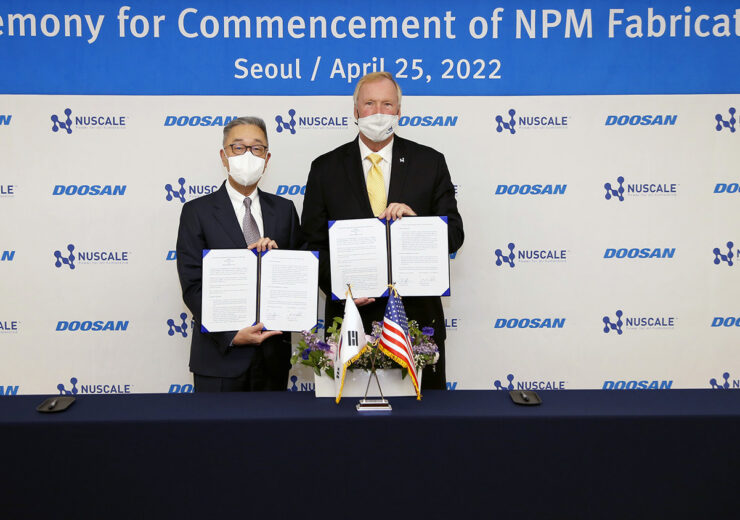 NuScale Power LLC (“NuScale”) and Doosan Enerbility Co., Ltd. (“Doosan”) announced through a signed agreement that Doosan will begin production of forging materials for NuScale’s Small Modular Reactors (SMRs) as early as 2022, with expectations for full-scale equipment manufacturing by the latter half of 2023. Specifically, Doosan, a Korean industrials and energy company, will begin production of forging dies for NuScale’s Upper Reactor Pressure Vessel, marking the start of NuScale Power Module production.

We expect that the materials produced will support NuScale’s first commercial deployment of its VOYGR power plant for Utah Associated Municipal Power Systems’ (UAMPS’) Carbon Free Power Project (CFPP) at the Idaho National Lab (INL). In conjunction with Doosan, U.S.-based suppliers and others, NuScale and the CFPP expect to bring carbon-free, safe, and reliable nuclear energy to UAMPS customers by the end of the decade.

Doosan completed a manufacturability review for the NPM in January 2021, which successfully established the manufacturing sequence and processes for the NPMs. Doosan is now working on NPM component prototype development. With this new agreement, Doosan will begin manufacturing of large forged materials used for NuScale’s SMRs in 2022 and expects to begin full-scale manufacturing of NPMs in the second half of 2023.

“Today’s announcement showcases NuScale’s commercial readiness and signals to the world that NuScale is truly the frontrunner in the race to bring SMRs to market,” said John Hopkins, NuScale President and Chief Executive Officer. “We are proud to have such a well-respected, expert leader like Doosan partnering with us in this journey to shape the future of energy.”

“Doosan Enerbility has continuously solidified a strategic cooperative relationship with NuScale Power and has made full preparation for SMR manufacturing,” said Geewon Park, Chairman and Chief Executive Officer of Doosan Enerbility. “The growing market demand for SMRs will also open a door for participation of our subcontractors,” he added.

This milestone builds upon NuScale and Doosan’s existing relationship, which began in 2019 when Doosan made its initial investment in NuScale. Since then, Doosan has conducted an extensive multi-year effort, completing the design for manufacture of the NPM and performing manufacturing trials to reduce schedule risk and increase cost certainty.

This announcement reflects one of NuScale’s many strong relationships with world-class suppliers and manufacturers. In addition to Doosan, NuScale continues to develop its supply chain readiness through coordination and execution of manufacturing orders with its many partners. Other agreements with U.S. and international suppliers are currently in the works to ensure NuScale can deploy its SMR technology to domestic and international customers.